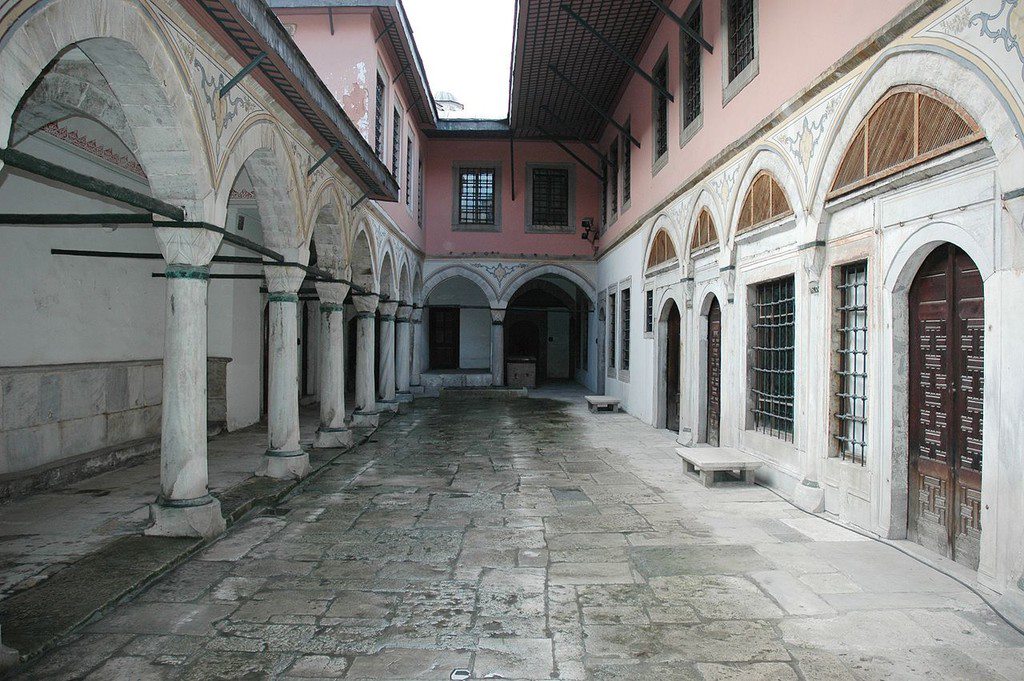 Black Chiefs and all women regardless of their status were servants like the palace employees. The training system of concubines were like that of Converts. 16th century sources states that there used to be 2 dormitories for newly recruited concubines in Harem as it is the same at Enderun. The majority of concubines that were recruited between ages 5-16 originated generally Çerkez, as it is also known about the presence of Arabian and African concubines recruited.

In addition, the ages of concubines recruited for various services could be higher. The concubines recruited were first health examined. The new concubines were given new names considering their beauty, attitudes and appearances. The girls taken into the palace were taught Turkish and the etiquette manners. the first period of these girls at Harem was called as inexperience. Later, they used to become concubines, and after that promote to master apprenticeship called as (şakirt), mastership (ustalık) and constant frequenter class within time.

Because the most of concubines are employed for services, they were given to general services such as laundry, hamam heaters, pantry, table, after a short time. The beautiful and smart ones used to be trained by kalfa women about reading-writing, sewing, embroidery, playing music instruments, singing and dancing depending on their skills. The Sultans did not have relations with all concubines that were selected and trained for them, and their departure from the Palace was provided by making them marry with appropriate people.

The highest ranking of the palace women was called as Kadın. The concubines who were called as "for Private Room", Favorite (Gözde) or Prosperity (İkbal) among those the Sultan had relation with used to promoted later to Official wife of Sultan and Head of Wives (Kadın Efendi) after giving birth.

ROLE OF THE CONCUBINES

The Courtyard of the Favourites in the harem of Topkapı PalaceFor the perpetuation of the dynasty and service to the Ottoman Dynasty, beautiful and intelligent girls were brought in from the neighbouring countries to become imperial concubines (Cariyes). The concubines who were introduced into the Harem in their tender age were brought up in the disciplines of the Palace. They were promoted according to their capacities and became kalfas and ustas.

The powers of the Queen Mother even extended to questions of life and death of a concubine, with eunuchs directly reporting to her. The concubines either lived in the halls beneath the apartments of the consorts, Queen Mother and the Sultan, or in separate chambers. The consorts, kadınefendi, who had borne children to the sultan and whose number varied between four to eight formed the group who came next in rank to the Queen Mother.

Among those women who lived in their own quarters with their concubines and children "Baş Haseki", the favourite consort who was the mother of the crown prince and three other kadınefendis enjoyed a privileged position in the hierarchy of the harem.

COURTYARD OF THE SULTAN'S CONCORTS AND THE CONCUBINES

This area also known as Kadın Efendi or Concubine Stone Courtyard is the smallest courtyard of Harem. This Stone Courtyard can be accessed through a corridor on the left side of guard duty place which lets Harem’s Cümle Gate. This corridor had been formed with the wall that separates Black Chiefs Section on one side, and Masters’ Flat that separates Mother of Sultan Stone courtyard on the other. There are marble counters on one side of corridor. This counter is the place where Black Chiefs put the foot that is prepared at Harem’s kitchen on plates for Harem residents.

There are Concubine Dormitories in the section where the payeli substructure holds Head of Wives and Mother Of Sultan Flats. Concubines could continue their Harem life which they started on the lowest floor on higher floors and higher levels in regards to their abilities and chances, or after completing 8 years, they would become çırak. These dormitories were the places that could respond to the needs daily life with its wooden şirvan, light spaces, bathrooms and ablution places in 17th century when the concubines were the highest in number in Harem.

The three independent tiled apartments with fireplaces overlooking the Golden Horn were the quarters where the consorts of the Sultan lived. These constructions covered the site of the courtyard in the late 16th century. At the entrance to the quarters of the Queen Mother, wall frescoes from the late 18th century depict landscapes, reflecting the western influence.

The entrance to the apartments of the Queen Mother (Valide Sultan Dairesi) was decorated in the 18th century with paintwork depicting panoramic landscape views in the Western European style. The oldest bath of the Harem situated on the courtyard’s left hand side was converted into the baroque style in the mid-18th century.  The wards of the head servants and dormitories of the concubines were located on the upper floor.

Using the door between dormitory and Heads of Wives Flat, stairs leads to mezzanine. Mezzanines have been built over this descent system that is called as Fourtystairs (Kırkmerdiven). Using Fourtystairs, Stone Courtyard also called as Hospitals and Concubine Courtyard can be accessed.

On the courtyard’s right hand side we find the ward historically referred to as the “long room”, which was heated with a large stove. The arched doorway next to the long room leads to the Harem hospital through a monumental stairway called the “40 steps”. The staircase, called the "Forty Steps" (Kirkmerdiven), leads to the Hospital of the Harem (Harem Hastanesi), the dormitories of the concubines at the basement of the Harem and Harem Gardens.

The Passage of Concubines (Cariye Koridoru) leads into the Courtyard of the Sultan's Chief Consorts and Concubines. On the counters along the passage, the eunuchs placed the dishes they brought from the kitchens in the palace.

The access to the section of the Harem where the women lived was provided through the Hallway/Corridor of the Concubines. The dishes prepared in the kitchens were brought here on large trays and placed on the hallway’s counters and racks by the black eunuchs; and after they had left the area, the concubines on duty would then pick up and serve the plates to the residents of the Harem in a hierarchical order according to rank and title.

These scripts and photographs are registered under © Copyright 2018, respected writers and photographers from the internet. All Rights Reserved.
Posted by ISTANBUL, Extended On Two Continents at 5:38 AM