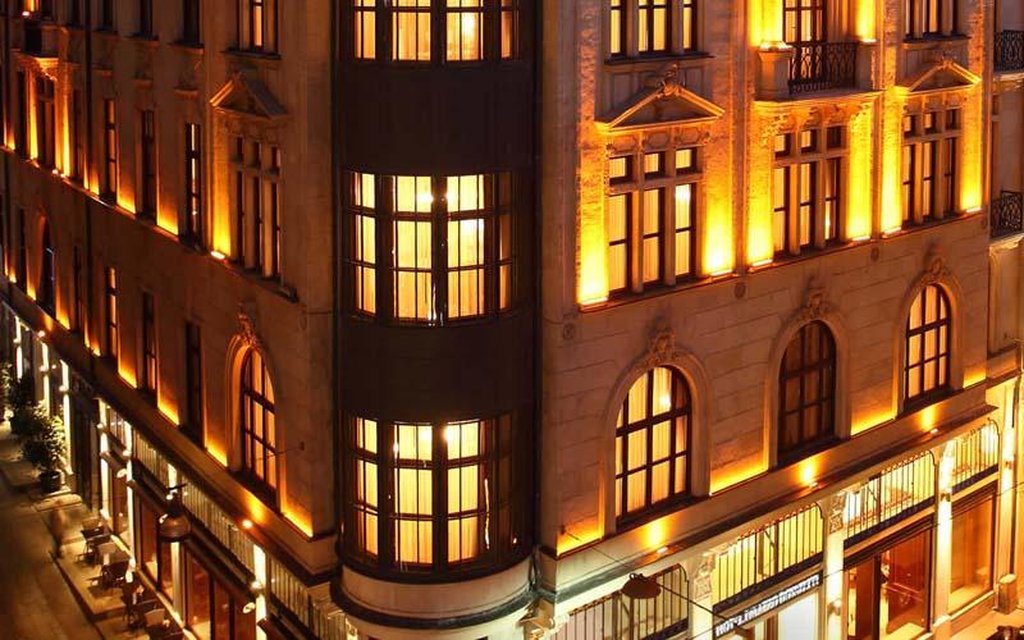 This fancy baroque pile, which opened last summer, is a handsome 19th century remnant of the “belle epoque” of Beyoğlu. It was named after musician Giuseppe Donizetti, older brother of the famous Italian composer Gaetano Donizetti. Known in Turkey as Donizetti Pasha, Giuseppe came to Istanbul to teach European music to the Ottoman band and to members of Sultan Mahmut II’s family.

Giuseppe Donizetti (6 November 1788 - 12 February 1856) was an Italian musician. Starting from 1828, he was Instructor General of the Imperial Ottoman Music at the court of Sultan Mahmud II (1808 - 1839). He never left. He had no connection with the building itself, but lived in the same street. His younger brother Gaetano Donizetti was a famous opera composer. Although the elder Donizetti was born in Bergamo, Italy, Istanbul became a second home for him, where he lived until his death in 1856. He is buried in the vaults of the St. Esprit Cathedral, near the Beyoğlu district of Istanbul, in Pera.

Donizetti Paşa, as he was called in the Levant, played a significant role in the introduction of European music to the Ottoman military. Apart from overseeing the training of the European-style military bands of Mahmud’s modern army, he taught music at the palace to the members of the Ottoman royal family, the princes and the ladies of the harem, is believed to have composed the first national anthem of the Ottoman Empire, supported the annual Italian opera season in Pera, organised concerts and operatic performances at court, and played host to a number of eminent virtuosi who visited Istanbul at the time, such as Franz Liszt, Parish Alvars and Leopold de Meyer.

A luxury design hotel named after the composer Giuseppe Donizetti who lived in Beyoğlu during the Ottoman era. With a convenient location, close to the city center and all major means of public tranportation. The hotel features 79 rooms that combine elegance with history and modernity. The decor features Carrera marbles, antique Venetian colors, stained glass lighting, and high ceilings with classic motifs.

The neo-classical interior design avoids excessive flourishes. It is quite restrained. The entrance, in particular, has been left quite bare to avoid drawing attention away from the grandeur of the structure. The hotel boasts an inviting spa with an art nouveau decor. Its restaurant, called Kalamata, specializes in Rumelian and Balkan cuisine. A jazz bar and a North Shield pub also figures among the hotel’s attractions.

MEETING & EVENTS
Mecidiye Conference Room in Istanbul is ideal for a variety of purposes including meetings, seminars, banquet events for about 80-120 people, auctions and mini exhibitions.

These scripts and photographs are registered under © Copyright 2018, respected writers and photographers from the internet. All Rights Reserved.
Posted by ISTANBUL, Extended On Two Continents at 10:50 AM