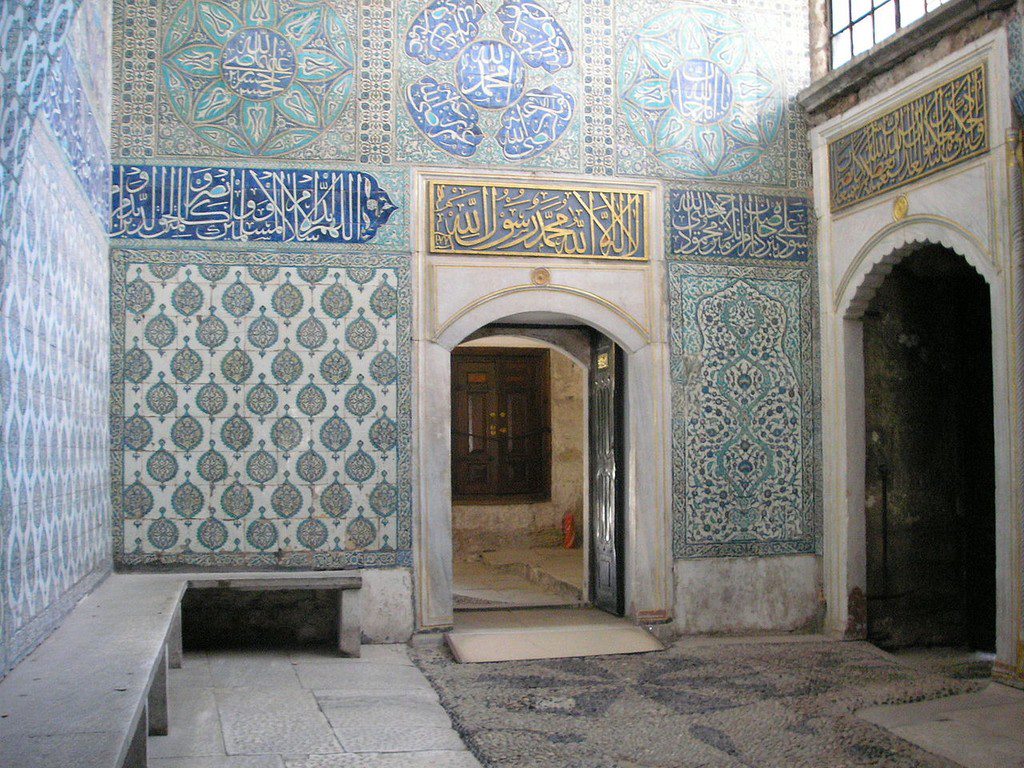 The main entrance (Cümle Kapısı) separates the harem in which the family and the concubines of the Sultan resided from the Courtyard of the Eunuchs. This gate, an open platform with domes and arches leads out into the sentry post (Nöbet Yeri) to which the three main sections of the harem are connected.  The lateral wall of the platform is covered with panels using the famous cypress-dotted tiles typical of the Topkapı Harem.

The access to this space is provided through a crowned archway with Rumi style ornamentations (a style of ornamentation, widely used by the Seljuks of Anatolia) and bearing a 1667 dated Koran verses inscription. The door on the left of the sentry post leads through the Passage of the Concubines to the Court of the Concubines (Cariyeler Taşlığı). The door in the middle leads to the Court of the Queen Mother (Valide Taşlığı) and the door to the right leads through the Golden Road (Altınyol) to the Sultan's quarters. The large mirrors in this hall date from the 18th century.

The door leads out into the sentry post (Nöbet Yeri) to which the three main sections of the harem are connected. The door on the left of the sentry post leads through the Passage of the Concubines to the Court of the Concubines (Kadınefendiler Taşlığı). The door in the middle leads to the Court of the Queen Mother (Valide Taşlığı) and the door to the right leads through the Golden Road (Altınyol) to the sultan's quarters. The large mirrors in this hall date from the 18th century.

Sentry Post
Another important structure in this direction is the Sentry Post. It is a three-storey building allocated to the guards, who controlled the Aviary Gate (Kuşhane Kapısı) and the main entrance gate of the Harem (Cümle Kapısı).  It is connected on one side to the mezzanine where the black eunuchs guard the main entrance.

THE DOME WITH CUPBOARDS ROOM

This place was built as a vestibule to the Harem in 1587 by Sultan Murat III (1574-95). The Harem treasury worked here. In its cupboards, records of deeds of trust were kept, administered by the Chief Harem Eunuch. This treasury stored money from the pious foundations of the Harem and other foundations, and financial records of the Sultans and the imperial family as well as the valuable presents sent annually by the Ottoman Sultan to Mecca and Medina during the period of pilgrimage.

HALL OF THE ABLUTION FOUNTAIN

The double space room at the entrance of the Harem was called the Hall with the Fountain due to the marble fountain which was under its dome. It reached our present-day in its remodelled form after the 1665 Harem fire. It was conceived as an entrance hall under the control of the Harem eunuchs. The Hall of the Ablution Fountain, also known as "Sofa with Fountain," (Şadirvanli Sofa).

The walls are revetted with 17th-century Kütahya tiles. The horse block in front of the mosque served the sultan to mount his horse and the sitting benches were for the guards. The fountain that gives the space its name was moved and is now in the pool of the Privy Chamber of Sultan Murad III.

It was conceived as an entrance hall under the control of the Harem eunuchs. This space is connected through a series of doorways to the Great (Horse) Mounting and Curtain Gate connecting the Harem to the Privy Garden (Has Bahçe); and to the Masjid (Mescit) of the Eunuchs and to the Tower of Justice from where the sultan watched the deliberations of the Imperial Council, led to this place.

On the left is the small mosque of the black eunuchs. The tiles in watery green, dirty white and middle blue all date from the 17th century (reign of Sultan Mehmed IV). Their design is of a high artistic level but the execution is of minor quality compared to 16th-century tiles, and the paint on these tiles blurs. The stone pedestal in front of the Masjid was foreseen for the Sultan to step on while mounting his horse and the seating benches were there to be used by the guardsmen.

Until the late 19th century, there had been a small inner court in this corner of the Enderun Courtyard. This court led through the Kuşhane Gate into the harem. Today this is the gate from which the visitors exit from the Harem. Birds were raised for the sultan's table in the buildings around the gate. On the inscription over the Kuşhane door one reads that Sultan Mahmud I had the kitchen of the Kuşhane repaired. The balcony of the aviary facing the Harem Gate was constructed during repair work in 1916. The building's facade resembles traditional aviaries.

The Harem’s entrance gate from the Second Courtyard is the Gate of Carriages (Arabalar Kapısı). The inscription above the gate dated 1586 specifies that the Harem was expanded under Sultan Murat III (1574-95). The Gate is also called Gate of Girls since it was the gate used by women of the Harem when they were returning to the court from the waterside summer residences or when the Mother Queens were entering the Harem after the accession to the throne of their sons.

These scripts and photographs are registered under © Copyright 2018, respected writers and photographers from the internet. All Rights Reserved.
Posted by ISTANBUL, Extended On Two Continents at 5:20 AM