COURTYARD OF THE QUEEN MOTHER 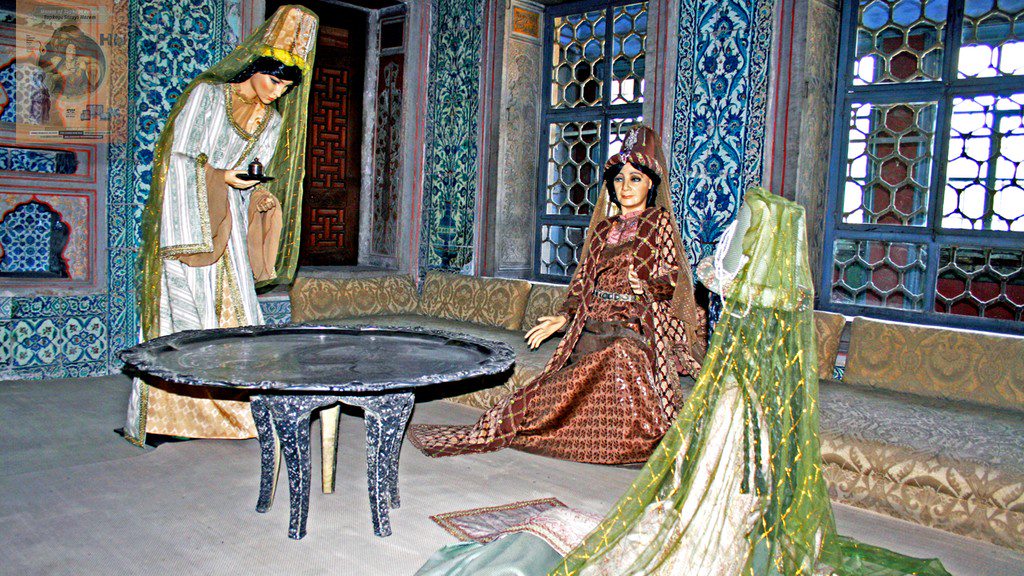 STONE COURTYARD OF THE QUEEN MOTHER

After the main entrance and before turning to the Passage of Concubines is the Courtyard of the Queen Mother (Valide Sultan). Mother Of Sultan Stone courtyard had constituted the core of the construction group where Dynasty and Harem residents lived for centuries. It is assumed that Goldenway which formed on wing of this Stone Courtyard and some other buildings are the buildings Harem that date back to first half of 15th and 16th century.

This place turned into a internal courtyard upon construction of Mother Of Sultan’s Flat and hamams at the end of 16th century. Valide Stone courtyard, as a “Life” Stone Courtyard character in the middle sofa of Turkish house, is the most significant example of the Ottoman Architecture in this style. In this sense, it used to gather high level harem women staff around itself who were the central place of the Ottoman dynasty and Harem.


The courtyard of the Queen Mother is situated directly at the core centre of the Harem as if it was put there to emphasize the queen mothers’ importance within the hierarchical order of the Harem. The Apartments of the Queen Mother (Valide Sultan Dairesi) facing the Golden Horn and the Baths of the Sultan were constructed after the Queen Mothers moved into the Topkapı Palace in the late 16th century from the Old Palace (Eski Saray).

The hall with the fireplace (Ocaklı Sofa) situated next to the baths, opens, through a gate referred to as the Sultanate or Throne Gate (Saltanat/Taht Kapısı), onto the living spaces of the dynasty.  These are the quarters of the Sultan, the Head Woman’s (Baş Haseki) and the Crown Princes’.   Ottoman tiles of various eras adorn the walls of the courtyard. The fountain in the courtyard was erected during the reign of Sultan Mehmet IV in the 17th century.

APARTMENT OF THE QUEEN MOTHER

This flat was one of the most significant constructions of renewal and expansion activities in Harem by Sultan Murad III (1574-1599) in 1580s. The special importance and value on the mother in Turkish families put Mother Of Sultan into foreground in palace Harem instead of Sultan’s main woman and the mothers of sultans became the true leaders of harem.

The Flat of the Queen Mother (Valide Sultan Dairesi) together with the apartments of the sultan forms the largest and most important section in the harem. It was constructed after the Queen Mother moved into the Topkapı Palace in the late 16th century from the Old Palace (Eski Saray) but had to be rebuilt after the fire of 1665 between 1666-1668. Some rooms, such as the small music room, have been added to this section in the 18th century.

The Queen Mother’s Apartments initially commissioned by Sultan Murat III (1574-95) for his mother, Sultan Nurbanu, constitute the centre of the Harem.   The unit was built by Court Architects Mimar Sinan and Davut Agha in the 1580’s but had to be renovated following the 1665 Harem fire. It received its present appearance following a series of repairs and additions made at different periods.

The space where queen mothers spent their daily life consists of a hall entered through a small door on the left hand side, featuring a symbolic throne section called Shirvan (Şirvan) and a room for prayer which is adjacent to that hall. The walls of the hall, which is a domed space endowed with iwans is covered with 17th century Ottoman tiles. The upper parts of the walls were decorated in the 19th century with paintwork depicting panoramic views.

The outlook of the unit has changed when the apartments of Queen Mother Sultan Mihrişah, - the mother of Sultan Selim III - including a main hall, a prayer room and a balcony were built in the rococo style in 1789 on top of the existing structure. The original hall featuring the above-mentioned throne section with the Shirvan was then utilized also as a sleeping room.

The walls of Sultan Mihrişah unit’s main hall are covered with the last high-quality examples of 17th century Iznik tile making. This room is lit through a rococo patterned vault with a round glass window.  The access from this hall into the prayer room is effectuated through a passageway with a marble door jamb and an iron latticework. One of the walls is covered with a tiled panel featuring a depiction of the Holy Ka’bah (Turkish: Kâbe).

These are all enriched with blue-and-white or yellow-and-green tiles with flowery motifs and İznik porcelain from the 17th century. The panel representing Mecca or Medina, signed by Osman İznikli Mehmetoğlu, represents a new style in İznik tiles. The paintwork with panoramic views in the upper rooms is in the Western European style of the 18th and 19th century.

Situated on top of the flats of the Queen Mother are the apartments of Mihirisah in the rococo style. Leading from the flats to the baths lays the apartment of Sultan Abdül Hamid I. Close to that is Sultan Selim's III love chamber constructed in 1790. A long, narrow corridor connects this to the kiosk of Sultan Osman III dated to 1754.

Women whose sons ascended the throne as a monarch acquired the title of  “Queen Mother /Sultana” (Valide Sultan) and moved from the Old Palace in Bayezit to the Topkapı Palace by means of a grand ceremony called the Queen Mother Procession (Valide Alayı). The powers of the Queen Mothers, considered the highest authority in charge of the Harem, rose significantly, in particular during the 17th century where many of the Sultans ascended the throne at very young age.

Thus leading to the occurrence of a period in the history of the dynasty referred to as the “Women’s Sultanate/Reign” (Kadınlar Saltanatı).  However, the queen mothers whose ruling son died or was dethroned had to return to the Old Palace together with all their entourage, thus putting an end to their reign.

SOFA OF THE QUEEN MOTHER

It is known that this flat with its contemporary shape was built by Murad III for his mother Nurbanu Sultan. Mother Of Sultan Flat constitutes an integrity with its hamam, bathroom and all rooms. There is a stair that connects the lower and upper stairs on the left of old entrance hall, and on the right, there is a waiting room. These stairs lead to sections where the Concubine Dormitories are located. It can also be said that Mother Of Sultan’s belongings and high level kahya women were located in those 5 rooms above Mother Of Sultan’s Flat in upstairs and hamam külhanı.

The reason of Sultan’s mother’s leverage in palace stems from the importance that the sultan displays for them. Sultan used to visit her every morning at Mother Of Sultan’s Flat to show respect and share his daily decisions. Later, Chief of girls used to come to inform her about foundations and Mother of Sultan’s business. It is also recorded that the Gözdes used the visit Mother Of Sultan here, that entertains with dancers and singers, listens to Kur’anı Kerim or history book from reader kalfa after having lunch.

BATH OF THE SULTAN AND THE QUEEN MOTHER

It was concluded that these hamams, that were constructed as double hamams for Mother Of Sultan and Sultan himself, were built around 1580s, after completion of III. Murad’s Private Room. These hamams were built in double hamam style that was observed in Ottoman architecture. The obligations regarding apdest (ablution) and cleaning increase hamam’s importance. Sultan Hamams, with their locations between Mother Of Sultan’s Flat and Sultan’s Sofa, display parallelism with the bathing and entertaining functions in traditional palace hamams.

Under supervision of Hazinedar Master, the bathing, dyeing with henna, putting scent and dressing of gözde who would be together with Sultan, Fourthy Hamams of the kids after birth and joining of Sultan’s Sofa to this busy ceremony environment prove the importance of hamams in Harem life. The hypocaust system that is also observed in Roman hamams constitutes the heating system of these constructions by continuing underneath Sultan’s Sofa as it was the same under the marble floor of Sultan ve Mother of Sultan Hamams.

The next rooms are the Baths of the Sultan and the Queen Mother (Hünkâr ve Vâlide Hamamları). This double bath dates from the late 16th century and consists of multiple rooms. It was redecorated in the rococo style in the middle of the 18th century. Both baths present the same design, consisting of a caldarium, a tepidarium and a frigidarium. Each room either has a dome, or the ceilings are at some point glassed in a honeycomb structure to let the natural sunlight in. The floor is clad in white and grey marble.

The marble tub with an ornamental fountain in the caldarium and the gilded iron grill are characteristic features. The golden lattice work was to protect the bathing Sultan or his mother from murder attempts. The Sultan's bath was decorated by Sinan with high-quality İznik polychrome tiles. But much of the tile decoration of the harem, from structures damaged by the fire of 1574, was recycled by Sultan Ahmed I for decoration is his new Sultan Ahmed Mosque in Istanbul. The walls are now either clad in marble or white-washed.

The Golden Road (Altınyol) is a narrow passage that forms the axis of the Harem, dating from the 15th century. It extends between the Courtyard of the Harem Eunuch (Harem Ağaları Taşlığı) and the Privy Chamber (Has Oda). The walls are painted a plain white colour. It is believed that the attribute "golden" is due to the sultan's throwing of golden coins to be picked up by the concubines at festive days, although this is disputed by some scholars.

The sultan used this passage to pass to the Harem, the Privy Chamber and the Sofa-i Hümâyûn, the Imperial terrace. The Courtyard of the Queen Mother (Valide Sultan Taşlığı’), the Courtyard of the Chief Consort of the Sultan (Baş Haseki), the apartments of the Princes (Şehzadegân Daireleri), and the apartments of the Sultan (Hünkâr Dairesi) open to this passage.

These scripts and photographs are registered under © Copyright 2018, respected writers and photographers from the internet. All Rights Reserved.
Posted by ISTANBUL, Extended On Two Continents at 3:43 AM