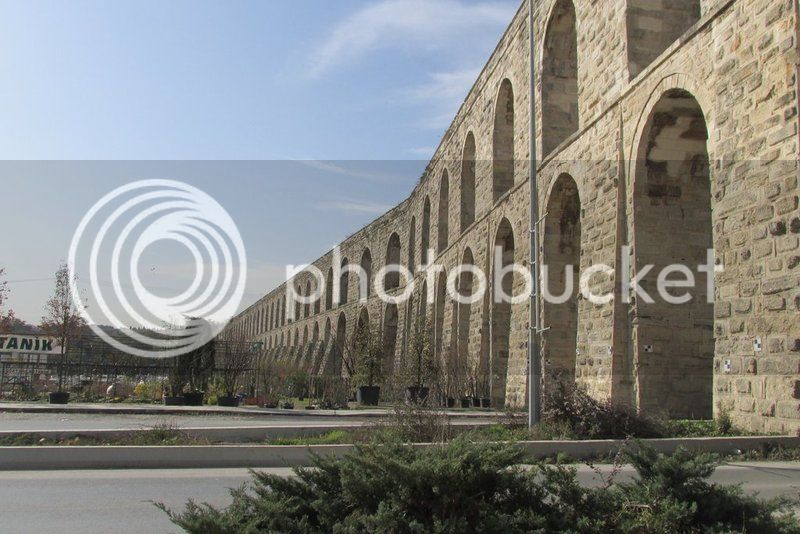 After the Forth Crusade’s sack of Constantinople and the establishment of the Latin Empire in 1204, water supply systems, which were built during the Roman period, inside and outside the city walls were totally blasted.

After the Ottoman conquest of Istanbul, one of the matters to be dealt with first by Sultan Mehmed II. the Conqueror was to meet the city’s running water requirements. Sultan Mehmed II ordered a thorough repair of all water supply systems. In the course of time increasing population let to water shortages.

Uzun Aqueduct crosses the Kağıthane stream. It is 711 m in length has fifty bays on first floor and fourty seven bays on the second floor. With a height of 25 m the aqueduct’s bay openings are range between 4.5 m and 5.35 m. Sinan the Architect used the 4th century foundations of the Uzun aqueduct while he was building the Kırkçeşme facilite between 1554 and 1563. It is located at the entrance of Göktürk Town, 3 km outside of Kemerburgaz.

Tthe Uzun Aqueduct is the longest structure of the Kırkçeşme Water Works system. The flood that destroyed the Maglova Aqueduct in 1563 also affected the Uzun Aqueduct. With a road that passes underneath the aqueduct now, it is easily visible and accessible.

Sultan Süleyman the Magnificent commissioned Sinan, his engineer and architect-in-chief, to solve this problem. Sinan undertook important works for the supply of water to the cities of Istanbul and Edirne. The Kırkçeşme System was rebuilt and redesigned by Sinan in 1555 - 1564. The preliminary studies were made under the constant supervision of Sultan Süleyman, and Sinan adopted a scientific approach in this task where mathematics held an important place.

Istanbul’s water was stored in the large number of reservoirs in the Belgrade Forest and conveyed to the city over aqueducts; this water then passed through distribution chambers located at various points in the city and thence was distributed to buildings and fountains within the city.

Water from the Alibey and Kağıthane streams was collected in pools and channeled to Eğrikapı and from there to the inner city. Due to the fact that there were no pipes about to withstand the excessive pressure, aqueducts were built to carry the water over the valleys.

It can be observed that the precise measurements and calculations made in establishing waterways and in construction of the water supply lines, aqueducts and accumulation pools were just as reliable as those made today by means of modern instruments. It incorporates 33 large and small aqueducts, five of which are known to have been built by Sinan. There are four aqueducts in the Kırkçeşme supply system, completed in 1563 : Uzun Kemer, Eğri (Kovuk) Kemer, Güzelce (Gözlüce) Kemer and Maglova Kemer.

Even in the driest months of the year the Kırkçeşme system, with a discharge of 4,200 m3 per day, was able to supply 158 different locations (94 public drinking fountains, 19 wells, 15 watering troughs, 13 public baths and 7 palaces among others.) The Halkalı water distribution system was also built by Sinan and provided water to Istanbul. It included the 50 km long Süleymaniye waterduct, which provided water to the Süleymaniye Complex and its neighborhood.

In order to maintain pressure, water towers were built in a number of locations; one of these can be seen in Ayasofia Square. There is another stone water tower next to the Şehzade Mosque, which, judging by its Baroque profile must be l8th century.

Works started in the reign of Sultan Mehmed II. the Conqueror were intensified when Süleyman the Magnificent was on the throne, continued throughout the reign of Sultan Mahmud I and, finally, of Sultan Abdülhamid II; this was a scheme that continued over a period of 500 years to satisfy Istanbul’s demand for water with a system of reservoirs, aqueducts and supply lines, together with the fountains connected to them.

The srtucture is also known as the Constantine Aqueducts, because Uzun Kemer carries the remnants of Byzantine Age. Therefore some sources mentions about these aquedycts (Uzunkemer and Maglova) as the repairs of Architect Sinan.

The aqueduct had been damaged by the induation that ruined the most famous aqueduct Maglova. Uzun Kemer aqueduct has been undergone several restorations through ages. Under the aqueduct, a highway passes.

Uzun Aqueduct is mentioned as a well preserved building and is still reflecting the properties of its era. It was damaged and repaired after the inundation diseaster. The aqueduct is known to have undergone many restoration processes during ages. Recently, there are some ongoing works on the structure by Eyüp Municipality.

Uzunkemer, a 711 meters long and 25 meters high aqueduct is part of a conveyance system supplying water to Istanbul. The remains of a Roman aqueduct were restored in midsixteenth century in order to provide water to the Ottoman capital . The structure has been in use ever since, but its stones have deteriorated and it is affected by environmental changes. The paper presents the project developed to ensure the long term stability of the monument.

At its northern and southern ends , the water channel is supported by solid walls. The two-storey high middle part consists of archivolts spanning approximately 4.5- 5.35 meters. There are 47 arches in the lower and 50 arches in the upper level. The aqueduct changes direction at the pier between the twenty-third and twenty-fourth openings. Historic documents supply limited information about the state of the Roman ruins at the time of the renovation.

A careful examination of the present structure reveals evidence of the incorporation of ancient and Ottoman masonry. The date of construction is between 1554-1563. In 1564, heavy rains caused floods and Uzunkemer was damaged. In the section rebuilt immediately after the flood, the piers were strengthened by abutments.

The Ottoman masonry of Uzunkemer is very similar to Roman work; sixteenth century masons tried to emulate the rusticated style . Large blocks were used for the facing but the main bulk of the piers is rubble masonry with Roman mortar. The blocks were joined with iron clamps; dowels and clamps were employed in the construction of the arches and vaults. Some masons marks were observed on the pier blocks.

Small rosettes, patterns of Catherine’s wheel or Solomon’s seal were carved on the pier blocks or the keystones to embellish the masonry. The beautiful rosette near the inscription block with the God’s name is unfortunately vandalized, probably by treasure hunters who took it as a sign of a hidden treasure.

These scripts and photographs are registered under © Copyright 2016, respected writers and photographers from the internet. All Rights Reserved.
Posted by ISTANBUL, Extended On Two Continents at 4:49 PM