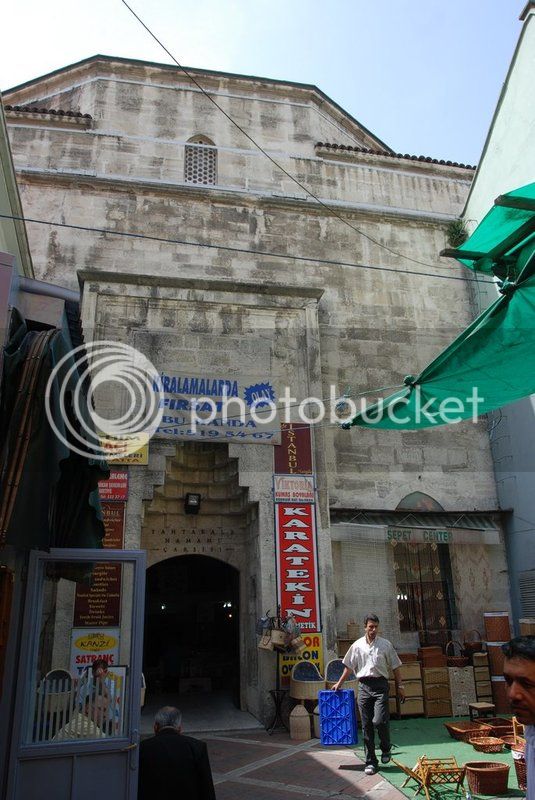 The Tahtakale Bath opposite the bazaar entrance of the Rüstem Pasha Mosque was built by Fatih Sultan Mehmet II (Conqueror) before 1470. The bath of the artisans’ quarter was partly demolished by the fire of 1726. The total area of the two storey bath, which functioned until the beginning of 20th century, measures 5.350 m2.

Sold to a private firm, it was used as a storehouse for cheese. During this conversion process walls were destroyed, windows and doorways were filled, a thick revetment for insulation was added. Lack of upkeep for decades increased the dilapidation of the remaining structure.

İstanbul's largest and oldest hamam is the famous Tahtakale Hamam. But these days, this building is no longer a hamam. In 1989, the building was no longer economically viable and clearing of the building was extremely expensive, The only financially possible use is its conversion to a commercial building.

The hamam was for many years years used as an ice plant and cold storage warehouse, but recently it has been restored and converted into a shopping mall. The camekân, which from its great size must have been very impressive, is almost square in plan, 16.70 by 16.25 metres, covered by a huge dome on a low drum. The hararet is also large and has a high dome.

Once you step inside the historic hamam you feel the nice enjoyable chill. It is worth mentioning that air-conditioners are not used in the building. There is a lot of interesting shopping to the left and right from the entrance, while right in the centre there is a nice coffee-shop.

It is the right place to taste the real Turkish coffee, meet friends and enjoy Turkish music. Interior of the coffee-shop is decorated with traditionally low tables and cosy couches. On the walls there are pictures of Ottoman sultans.

The building was opened for public use as the İstanbul Cafe after a period of restoration that lasted 5 years. One part of it is used as an inn, and directly in the center of this structure is İstanbul Kahvehanesi, a wonderful cafe. Istanbul Kahvehanesi, serving cups of the strong black Turkish brew in the shadow of marble arches and repurposed fountains.

The recently converted 500-year-old Tahtakale hamam has actually been altered very little. After entering its huge wooden doors, settle back for Turkish coffee and cakes while admiring its the marble surrounds and vaulted ceiling.

These scripts and photographs are registered under © Copyright 2016, respected writers and photographers from the internet. All Rights Reserved.
Posted by ISTANBUL, Extended On Two Continents at 1:13 PM