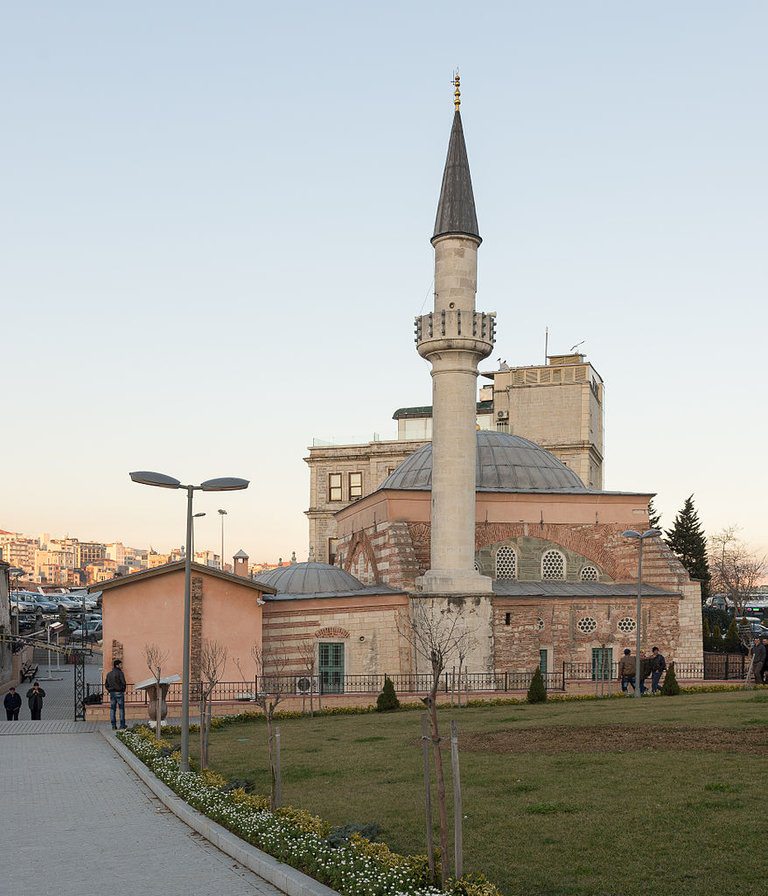 It is in Eminonu, on the shore of the Golden Horn, west from Zindan Han. It is located in Eminönü, by the coast of Haliç next to Istanbul Chamber of Commerce. The mosque, whose date of construction and architect is still unknown, was commissioned by Ahi Çelebi who was a head physician in Fatih Darüşşifa (Hospital) in the beginning of 1500s. The mosque, which is in a worn-out state and do not have many architectural highlights, holds an important place in Istanbul folklore for its being the mosque where Evliya Çelebi had his famous dream.

Ahi Çelebi Mosque has an important place in Istanbul folklore. Evliya Çelebi, the famous 17th century Ottoman traveler and writer, had his famous dream in this mosque. Evliya Çelebi, it appears, had a vision of the Prophet, in his twenty-first year, in which, stammering as he was, blinded by glory, he had asked, not as he meant to, for the intercession of the Prophet (shifaa't) but for travelling (siya'hat). Traveling had been granted, in abundance.

The mosque does not have a construction inscription, however based on some rumors that it was built in 1500, the date "1500" has been placed on top of its gate. The person who had the mosque constructed is Ahi Çelebi Mehmed bin Tabib Kemal Ahi Can Tebrizi and he lived in the times of Sultan Mehmet II, the Conqueror, Sultan Bayezid II, Yavuz Sultan Selim and Sultan Süleyman the Magnificent. He was a doctor and he had some books on kidney stones and medicine.

In the Tezkiret’ul Ebniye, written by Mustafa Sa'i Çelebi, a brief biography including a list of structures by Mimar Sinan (Sinan the Architect), it was shown to be one of his buildings, and the reconstruction of the mosque has been accelerated recently.

Ahi Çelebi Mosque is also known as Kanlıfırın Mosque or Yemişçiler Mosque. The mosque has experinced 2 fires that started in Yemiş Wharf, in 1539 and in 1653. After the second fire, it has been renobvated by the great Turkish architect Mimar Sinan, and for this reasons is counted as one of his Works. In 1894 earthquake it had been heavily damaged and has ben renovated. Ahi Çelebi Mosque is one of the odest mosques in Istanbul however it is wrecked.

The mosque is built on 4 pointed, brick arcs and has a very low single dome. The square surrounding of the dome is covered with iron. The two abutments on the two sides have been added at a later time. There are 4 windows in the big arcs and 3 on the niche  wall indicating the direction of Mecca.

The minaret is on the right. The gate of the minaret is above the floor and there are stairs leading to it. The front gate of the mosque is very simple. The niche  wall indicating the direction of Mecca has been renewed with the marble plaques. The inscription of the fountain which is in the adjacent building is dated 1864. The building, although insignificant architecturally, has a historic significance.

The original mosque was probably built in 15th century and was renovated by Architect Sinan after the fire in 1539. The mosque had suffered another fire in 1653 and earthquakes in 1892 and 1999.

These scripts and photographs are registered under © Copyright 2018, respected writers and photographers from the internet. All Rights Reserved.
Posted by ISTANBUL, Extended On Two Continents at 11:32 AM