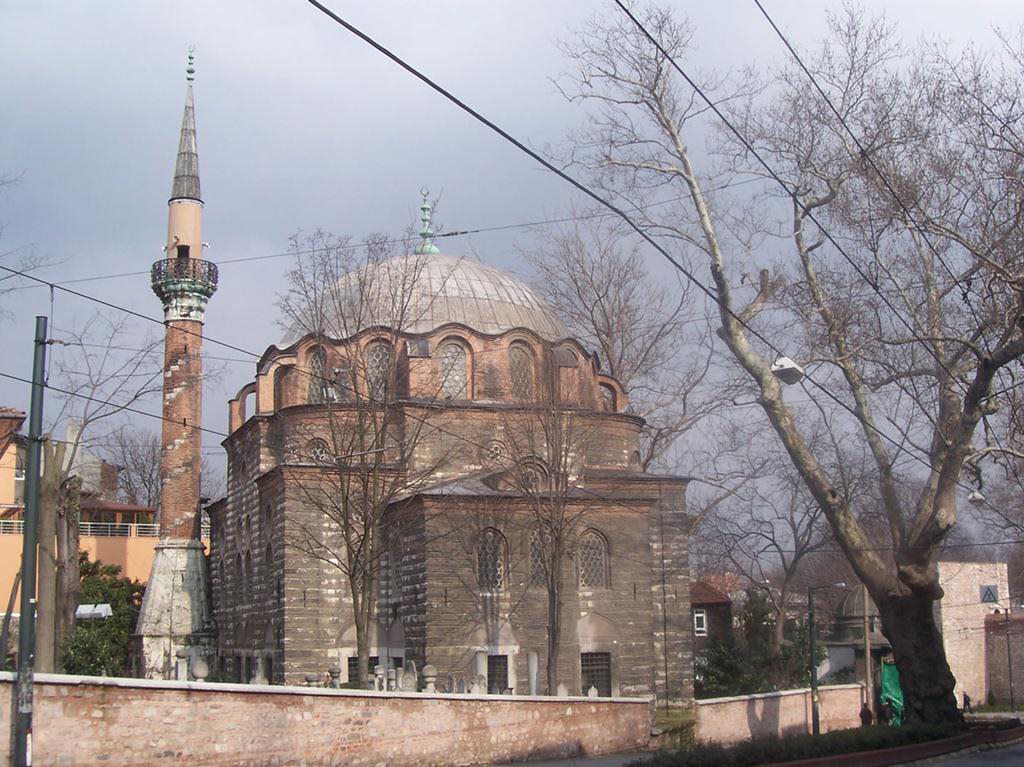 The Zeynep Sultan Mosque is built in 1769 by Ayazma Mosque's architect Mehmet Tahir Ağa for Sultan Ahmed III's daughter Zeynep Asime Sultan. It evokes Byzantine churches because of its architectural style and materials that were used in its construction.

The Zeynep Sultan Mosque in baroque style can be seen along the Alemdar Street. The dome of the mosque, which has a square layout, measures 12.2 m in diameter. The mosque, whose interior side was ornamented with crayons. In form it is merely a small square room covered by a dome, with a square projecting apse to the east and a porch with five bays to the west.

The mosque looks rather like a Byzantine church, partly from being built in courses of stone and brick, but more so because of its very Byzantine dome, for the cornice of the dome undulates to follow the extrados of the round-arched windows, a pretty arrangement generally used in Byzantine churches but hardly ever in Turkish mosques. The little sibyan mektebi at the corner just beyond the mosque is part of the foundation and appears to be still in use as a primary school.

After his murder during a Janissary rebellion, the dead body of the Grand Vizier Alemdar Mustafa Pasha was removed from the well near the Yedikule Dungeons and buried at the mosque in 1908.

The corpse of Zeynep Sultan, after remaining buried in the basement until 1950, was moved into her present tomb, when her original tomb was destroyed during construction work on the horse - drawn tram project in 1912. In addition, the tomb of her husband, Grand Vizier Melek Mehmet Pasha, who was Sultan Selim III's Grand Vizieris in the mosque.

The mosque is on Alemdar Caddesi (Street) in Istanbul, across the street from Gülhane Park and viewable from the tram that circulates the city. In the back side of the mosque there is a building which was once used as The elementary school (sibyan mektebi) of the complex was assigned to the Turkish Monuments Association in 1988.

The fountain in front of the mosque was moved to the Zeynep Sultan Mosque because of the construction works of the Fourth Vakıf Han. Yesari Mehmet Efendi is the calligrapher of the fountain. The fountain built as a part of the Sultan Abdülhamit I Complex in 1778 is the work of the Architect Tahir Ağa and is used as a kiosk today.

These scripts and photographs are registered under © Copyright 2018, respected writers and photographers from the internet. All Rights Reserved.
Posted by ISTANBUL, Extended On Two Continents at 8:11 AM