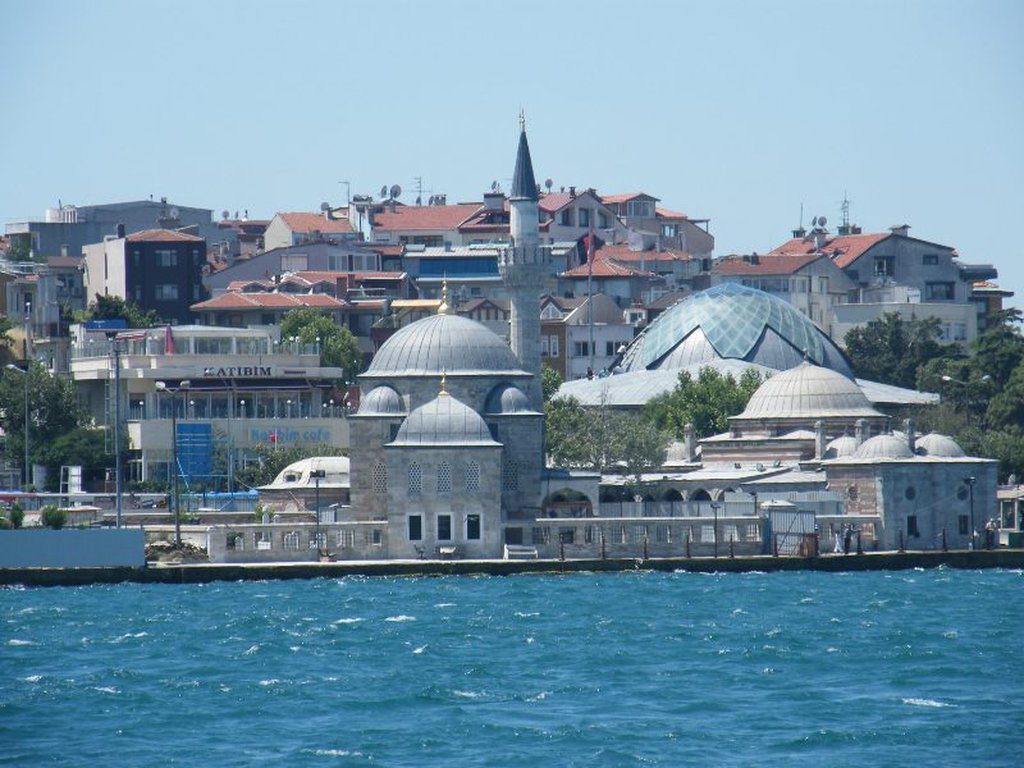 This mosque was designed by Mimar Sinan at the request of Şemsi Paşa, the vizier of Ottoman Sultan Süleyman (1520-1566) the Magnificient in 1580. Renowned as "the little gem" of Sinan, it is also called the Kuşkonmaz Camii, the mosque on which birds do not land (birds do not land there because of the wind off the Bosphorus). It is said that on the top of the dome, instead of the usual symbol (tombak alem) there used to be a golden inkstand and pen. The inside is covered with Ottoman glazed tiles and ornaments. There is an epitaph, written by Levni.

The chamber is crowned by a mirror vault at the height of the prayer hall drum. It has three casement windows facing the Bosphorus and nine upper windows on three walls, adorned with coloured glass. Surrounding the Mosque is a larger complex, situated on the coast of Üsküdar, also built by court architect Sinan near the Şemsi Pasha Palace and, according to the inscription over the mosque portal, construction was completed in 1580. In 1940, an extensive restoration project was undertaken by the General Directorate of Religious Endowments, supervised by architect Süreyya Yücel.

This is the only complex in Istanbul that still enjoys the cool effect of the waves by the seaside. The mosque, which fronts one of the most curvilinear edges of the Bosphorous. It is now difficult to visualize how the original interior space of the mosque was, due to some later changes and additions, such as an added attendant's room and a women's section. Overall, the mosque and the gardens are well kept. A walled cemetery occupies the eastern precinct, behind the mosque's qibla wall.

The complex stands on a roughly rectangular site aligned east-west with the Bosphorus shoreline. The square, single domed mosque abuts the coast at an angle, with the adjoining tomb of the donor projecting towards the waterfront. Its precinct is enclosed by an L-shaped madrasa to the west and south, and a seawall with grill-windows to the north, giving the impression that one is in a picture gallery looking at framed Bosphorus seascapes.

The complex has two gates, one facing the land and the other facing the sea; the land gate opens to a private walled cemetery which occupies the eastern precinct, behind the mosque's qibla wall, which has become a burial site for generations of Şemsi Pasha. A gate along the seawall opens into the precinct courtyard, which is shared by the mosque and the madrasa. A secondary gate along the cemetery wall to the east also leads to this courtyard via a narrow passage.

The mosque portico, which envelops the prayer hall to the northwest and southwest, is faced across the courtyard with the madrasa arcade, at a smaller scale. Both the portico and arcade are covered by shed roofs and have pointed arches carried on columns with diamond-cut capitals. The mosque portico was rebuilt during the 1940 restoration. A single minaret with a single balcony rises above it, adjoining the southwest corner of the prayer hall.

Entered through a marble portal on its northwest wall, the prayer hall is surmounted by a single dome, which measures about eight meters in diameter. The transition to the dome is achieved with four squinches over an octagonal drum pierced with four arched windows. The prayer hall has nine casement windows - two on each wall with an additional window on the southeast wall.

Each casement is topped by an arched window with a different colored glass composition, and a circular window is placed above the mihrab. The simple marble mihrab has a muqarnas hood. Muqarnas carvings were also used to highlight the springing of the squinch arches. The wooden minbar is a modern replacement.

Tomb
The tomb chamber, which measures about four meters by four and a half meters, is attached to the prayer hall. It is entered from the outside from northwest, but opens into the prayer hall with a grilled archway. The chamber is crowned by a mirror vault at the height of the prayer hall drum. It has three casement windows facing the Bosporus and nine upper windows on three walls, adorned with colored glass. Decoration is limited to the stalactite carvings of the portal and painted floral and geometrical motifs on the mirror vault. Although its portal inscription was lost, inscriptive plaques over the archway in the prayer hall were preserved. The tomb, like the mosque, is made of cut stone.

Madrasa
The L-shaped madrasa has twelve domed cells and a large classroom, all fronted by an arcade whose shed roof is carried by nineteen columns. Cells are placed all in a row except at the northern end, where a single cell encloses the arcade before the seawall. The classroom, which is seven meters square, occupies the center of the western wing of and projects beyond the madrasa wall. It is surmounted by a dome carried on squinches and raised on an octagonal drum.

There are six windows on three of the classroom's walls, leaving the western wall for a furnace and two shelving niches. Each madrasa cell has two windows, a furnace and one or two shelving niches. The arcade was enlarged following the restoration and the madrasa was refurnished to house a library in 1953 with the classroom use as the reading room. An additional room with privy cells is attached at the end of the southern wing.

These scripts and photographs are registered under © Copyright 2018, respected writers and photographers from the internet. All Rights Reserved.
Posted by ISTANBUL, Extended On Two Continents at 4:48 AM