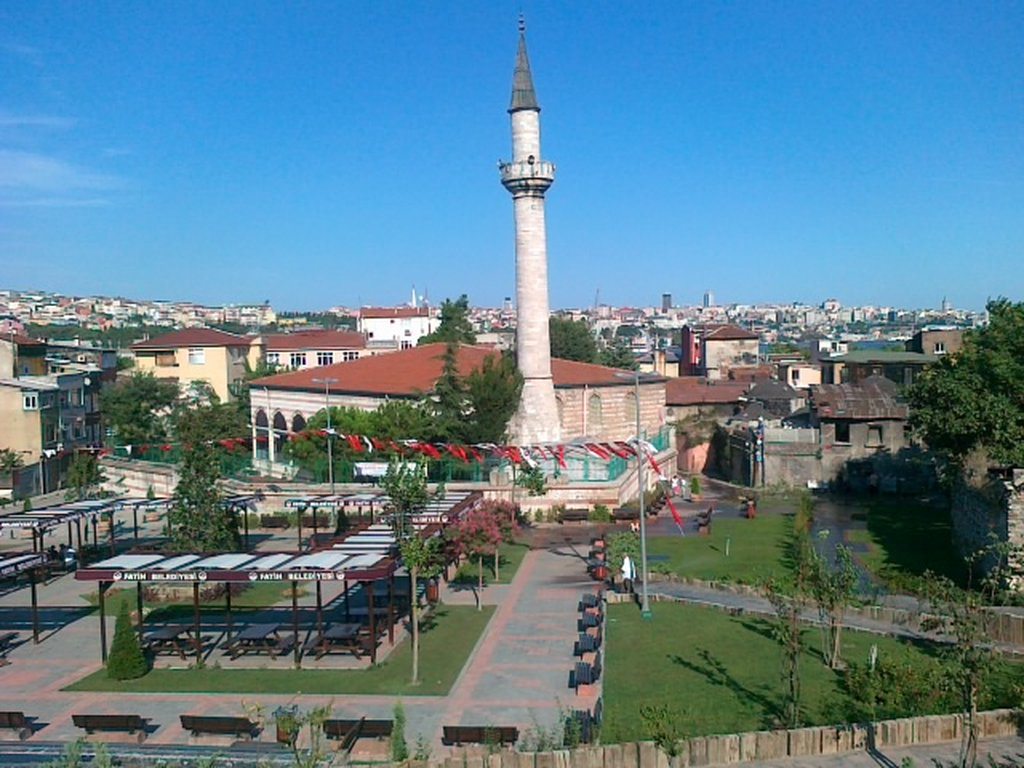 To the right of Balat Gate (Balat Kapısı) and on the same street as the church we come to a small mosque which is a minor work of the great Sinan. It is also called as Balat Mosque. This mosque is the only building that has remained to this day from a group of structures, mosque, a lodge, a courthouse, and a fountain, within the small complex built for Ferruh Ağa by Architect Sinan.

A long and handsomely written inscription in Arabic over the fine entrance portal of red conglomerate marble informs those who can read it that the mosque was built in A.H. 970 / A.D. 1562 - 1563 by Ferruh Ağa, Kethüda (Steward) of the Semiz Ali Paşa, the Grand Vizier of Kanuni Sultan Süleyman. The mosque was also used as a room for devotional prayer chanting (tevhidhane) by the dervish lodge (tekke). The Court of Balat was erected in the courtyard of the mosque.

The ceramics of the mihrab were that was produced in Tekfur Palace at the beginning of the 18th century. This rectangular mosque with a projecting mihrab stands inside a courtyard with eight corners. The walls were decorated with the tiles brought from Tekfur Palace and a pool was located in the garden.

The mosque, which measures 18.2 x 26 m, lost its features completely after the recent restoration. Made from dimension stone, the mosque has a rectangular plan. A deep porch precedes the mosque; it must have been rather impressive, supported, as it would appear, on eight columns, the plinths for which remain; but it has been very summarily restored and glazed in.

The building is of the simple rectangular type; it most probably once had a wooden ceiling with a little dome, but this has been replaced in a recent restoration by a flat concrete ceiling. The building is very long and shallow, with a long and shallow apse for the mihrab, which is adorned with tiles of the Tekfur Saray period. A wooden balcony runs along the west wall, but this is clearly not like the original, for it obstructs the windows in an awkward way.

All the same, it is attractive with its grand marble portal, two handsome niches with pretty conch tops, and at each end a curious sort of “anta” or projection of the mosque wall with windows above and below. This is the handsomest and most interesting of Sinan’s many mosques of this simple type and it deserves a more sympathetic restoration.

The upper part of the cylindrical stone minaret was rebuilt after the earthquake in 1766. The marble mihrab was replaced by a wooden one and the painted decorations are vanished as well.

There is an ancient hamam just to the east of the mosque. This has been attributed to Sinan, but wrongly; it is not in the Tezkere and it appears much earlier in a vakfiye (deed of a pious foundation) of Fatih himself. It is not very impressive and is hardly worth a visit.

An ablution fountain along with a public fountain stands in the courtyard. Furthermore, a sun watch was located on the back walls of the narthex which housed the Balat court house in the Ottoman era.

It has was damaged during the 1766 earthquake and the 1877 Balat fire and went through large scale restoration efforts. The narthex and almost all of the minaret were restored to a great extent. But it was restored very carelessly after the 1766 earthquake and the 1877 fire. The restoration of the mosque, which was abandoned after the tekke was closed in 1925, was finished in 1960 although it had been started in 1953.

There is a concrete hipped roof with terracotta tiles replacing the wooden roof which was collapsed in 1938. In 1955, all the woodwork is renewed by the waqfs. The was covered with Tekfur Palace tiles during the 18th century, to be preserved in a good condition. recently during the 2000s, all of the interior walls and the narthex were covered with tiles. This intervention has resulted in some loss of harmony in interior spaces.

By the beginning of the 21st century, the walls of the interior and the latecomers’ porch are covered with glazed tiles which caused the mosque to lost its accordance. The whole social complex consists of a lodge, court house and a fountain.

These scripts and photographs are registered under © Copyright 2018, respected writers and photographers from the internet. All Rights Reserved.
Posted by ISTANBUL, Extended On Two Continents at 9:19 AM