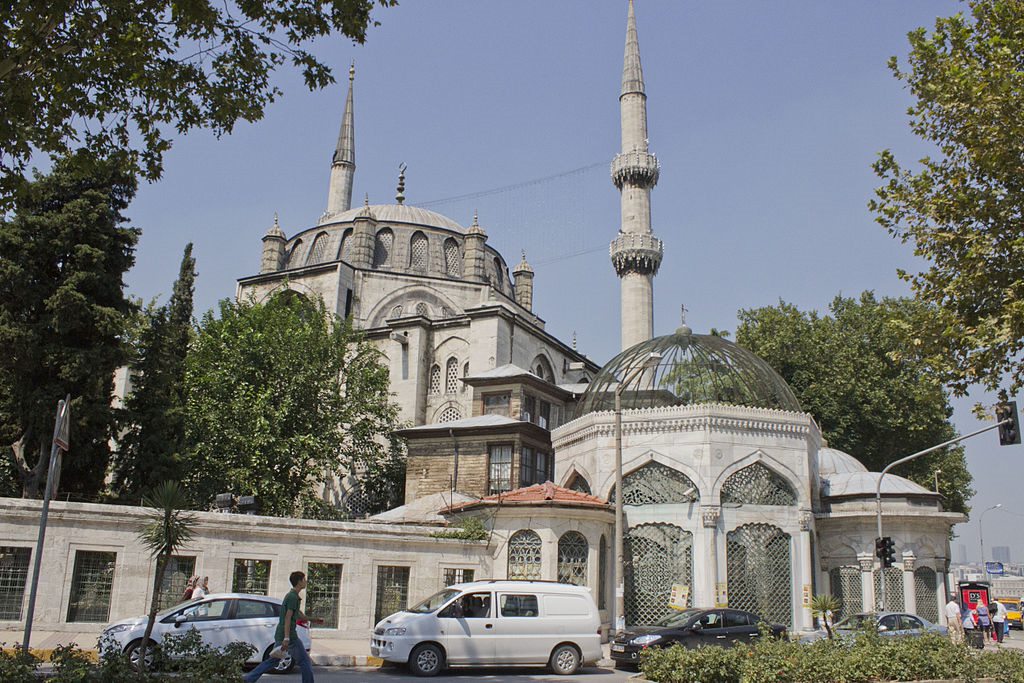 The Yeni Valide Mosque is an Ottoman mosque in the Üsküdar district of Istanbul. Designed by Kayserili Mehmed Ağa, the chief architect of the palace, this mosque was built in 1710 on the decree of Sultan Ahmet III in memory of his mother, Emetullah Rabi'a Gülnış Sultan. It consists of a group of buildings, including a soup kitchen, a mausoleum, fountains, a clock room, a chamber for the Sultans, a market, etc. The social complex, bearing the touch of Classical Ottoman architecture, constitutes one of the female attributes of Üsküdar.

The complex was composed of a mosque in the center and a madrasah parallel to the mosque sharing the same courtyard, a dervish lodge that is on the left side of the mosque on the same street, a primary school, an imaret (soup kitchen), a caravansary, printing house, a school for Quran reciters, a Turkish Bath and a Daruşşifa, which was designed as a full-scale hospital. The treatment and needs of the patients admitted to the darüşşifa were funded by revenues from the land properties donated by Nurbanu Sultan.

Construction on this mosque began in 1708, and was completed in 1711, when the mosque first opened for prayers. The Yeni Valide Mosque is also known as the Valide-i Cedid. The main part of the building is square in shape and covered with a flattened main dome and four half domes. Calligraphy inside the mosque is the work of Hezarfen Mehmet Efendi.

This mosque boasts two minarets with two galleries apiece, as well as a notably serene courtyard, access to which can be found via five different gates. As the benefactor of this historic mosque, the Valide Sultan lies in her tomb - which itself is reminiscent of a paradisiacal garden - in the courtyard of the mosque. When you finally come to see this mosque, you might hear writer Yahya Kemal whisper in your ears, “As the years pass by, İstanbul, appears to have depth not just through land but through history.”

The clock room is to the right of the graveyard. This room has three walls and three windows, and it is the place where prayer times were determined for the mosques in Üsküdar. There are four birdhouses built into the walls of the mosque. In particular, the birdhouse consisting of three domes and two minarets that protudes on the upper walls, facing the stone bier, is a masterpiece of Turkish stonework.

Located on Hakimiyet-i Milliyet Street, the octagon mausoleum of white marble was designed in 1708-1711 by Mehmet Ağa, the chief architect of Tulip Era, in the form of a bird cage; Gülnüş Vâlide Sultan had wished for an open-air tomb. Near to the tomb there is a building where drinking water was served in cups as a form of charity. Above its windows there is an epitaph belonging to the famous Divan poet Naima.

Across from the Balaban gate of the mosque, to the left of the soup kitchens, is the Sineperver Vâlide Sultan fountain, built on the orders of the second wife of Sultan Abdülhamid I in memory of his dead son, Şehzade Ahmed. The fountain is in the Turkish Baroque style. Next to the soup kitchen, there is a market consisting of twelve shops, that are located both on the left and the right. It was badly damaged by an earthquake in 1794. Only a small part of it and the fountain have survived.

It was one of the last big complexes to go up in the city in the days when mosques formed the centerpieces in networks of social facilities, including schools and hospitals, known as külliyes. The mosque itself has been restored recently and is well worth a look, as is the Yeni Valide Camii, mere steps away across another busy road. If you leave the Yeni Valide Camii on the sea-facing side, you will emerge opposite the newly restored Cedid Valide İmareti (soup kitchen), with its twin domes and a very pretty corner fountain.

These scripts and photographs are registered under © Copyright 2018, respected writers and photographers from the internet. All Rights Reserved.
Posted by ISTANBUL, Extended On Two Continents at 2:47 AM