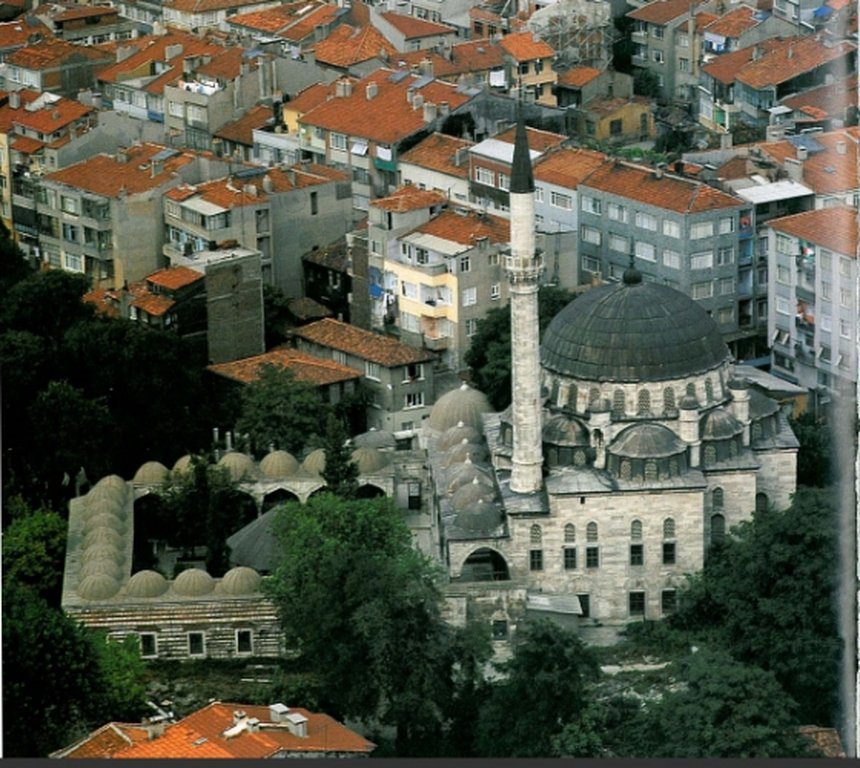 Mehmet Pasha got the Architect Davut Ağa to build the Nişancı Mehmet Pasha (Cedit Nişancı) Mosque, located on Fatih Nişanca Street, between 1584 and 1588. According to some researchers, it is considered as the final work of Sinan the Architect. One of the rare Ottoman viziers who had Turkish origins, Nişancı Mehmet Ağa designed a calligraphic seal for Sultan Murat III, which can be seen on the entrance gate.

According to the inscription above the portal, the complex was commissioned by Nişancı "marksman" Mehmet Paşa (d.1592). Although the complex is widely accepted as a Architect Sinan monument, its name doesn't appear in Sinan's Book of Buildings (Tezkiret-ül Bünyan). Given that Sinan died in 1588, the complex, whose construction began in 1584 and ended in 1589, could have been completed by one of his former assistants, the architect Davut.

Originally built as a madrasa and a dervish lodge (tekke), the complex today comprises only a mosque with a fountain courtyard and a tomb.

The mosque, a stepped structure developed from a simple square plan, is located on the southeast of the complex. A five-bay portico, facing the fountain courtyard, is attached to the northwest side of the mosque. This courtyard, with approximate dimensions of 32 by 35 meters, is located northwest of the mosque and is surrounded on three sides by a twenty-bay portico. The tomb is attached to the east corner of this courtyard.

To the northeast is a secondary courtyard wall, which turns and extends to the east corner of the mosque. This wall, together with the cemetery, encircles the tomb and forms the street edge. The complex is entered from two opposing doors; the northeastern door, located in the middle of the tomb courtyard wall, leads to the door of the fountain courtyard that falls west of the tomb. The southwestern door, facing the street, leads directly into the fountain courtyard.

Entering the fountain courtyard, one stands before the five-bay portico of the mosque, which is roofed by four domes on its side bays and a mirror vault in the central bay. The dodecagonal fountain of the complex is placed northwest of the central bay, strengthening the qibla axis. The central bay of the portico is elevated, indicating the portal into the prayer hall. This portal contains has a shallow muqarnas carving and an inscription.

Entering from this portal, the visitor has a sensation of spaciousness, an impression that contrasts with the actual dimensions of the prayer hall. This feeling is created by the unique structural and spatial configuration of the Nişancı Mehmet Paşa Mosque, where Sinan brought elements of earlier design experiments together.

The mosque is made of cut stone, and the portico is a composite stone and brick structure. The Nisanci Mehmet Pasa is mostly unadorned, excepting the modest painted ornamentation within the prayer hall. A dome 14 meters in diameter, flanked by four larger and four smaller half-domes on the sides, surmounts the central space. The load from the upper structure is distributed through the octagonal drum to eight columns embedded in the walls of the prayer hall, enhancing the unity of the interior space.

The prayer hall extends to the projected iwans found between the paired columns, creating a gradual enlargement of the interior. The marble mihrab is located in the southeastern iwan projection. The stepped character of the interior space is visible on the qibla exterior elevation, while two rectangular rooms fill the corners of the prayer hall on the entrance elevation.

Topped by mirror vaults and used as guest rooms, these rooms are directly accessed from the prayer hall. On the opposite side, the stairs embedded on the two sides of the qibla wall lead to the upper speech platforms. The upper galleries are found along the three walls of the prayer hall, leaving the qibla wall blank.

From a distance one sees the elegance of line and the masterly arrangement of the upper structure; the great dome surrounded by the eight little weight-turrets (the continuation of the columns that support the dome arches), the eight semidomes of two sizes, and the minaret unusually close to
the dome base - an excellently proportioned distribution of curves and verticals. One enters through the usual charming courtyard, the arches of which are of the ogive type; under the porch of five bays an inscription with the tuğra of Sultan Mustafa III.

The plan of the mosque is an interesting variation of the octagon inscribed in a square. Eight partly-engaged columns support the dome arches; in the axes there are four semidomes, while in the diagonals four smaller semidomes serve as squinches instead of pendentives. The eastern semidome covers a projecting apse for the mihrab, while those to north and south also cover projections from the square. The western corners of the cross so formed are filled with small independent chambers; above on three sides are galleries.

The whole arrangement is original and masterly; nor are interesting details wanting. In the corners of the east wall are two charming little kürsüs or platforms, access to which is gained by staircases built into the thickness of the wall from the window recesses. In the voussoirs and balustrades of these platforms, in the window frames, and elsewhere throughout the mosque, an interesting conglomerate marble of pale violet and grey is used; and for the columns which support both platforms and galleries there is another conglomerate marble of tawny brown flecked with yellow, gray, black and green.

The arches of the galleries, like those of the courtyard, are of the ogive type. As a whole, the mosque is a masterpiece; it is as if the unknown architect, in the extreme old age of Sinan, had decided to play variations on themes invented by Sinan himself and to show that he could do them as well as the Master. This basic unity of design is broken however by two cloister vaults covering the entrance and its neighbouring areas. The mosque gradually narrows in zigzags along the north-south axis with the effect of enhancing the kiblah (direction of Mecca).

The eyvan shaped plan created on the ground floor with the addition of two side rooms is masterfully integrated with the latecomers' area. Moreover, the opposition thus created between the mihrab and the latecomers areas does not hinder the spatial harmony of the interior. The dome, which is not very large, is easily supported by the zigzagging walls which function as buttresses. As for the south or kiblah facade, which had remained as massive as a buttress wall in many mosques until then, Sinan finally manages to give it the liveliness and portent it deserves. All these features indicate how important a stage this mosque represents in Sinan's development.

In the little graveyard behind the mosque is the small and unpretentious türbe of Nişancı Mehmet Paşa. The tomb is an octagonal structure surmounted by a dome. It is entered though the portal on the northeast, where a three-bay portico is attached to the elevation. The portico is surmounted by an eave and is carried over four columns. Under the portico, the sides of the entrance are ornamented with mihrab niches. All sides of the tomb, except that facing west, which is embedded in the arcade of the northeastern entrance of the fountain courtyard, feature a casement window with an arched window above it.

The tomb has an 8 cornered plan scheme and covered with a dome. The entrance is covered with a roof which is supported by four columns. The main walls of tomb are made of lime stone and marble is used around windows and columns. There are two rows of windows at seven facades; the upper row has stained glass. There are ornaments and carvings on dome and interior walls. The tomb is well preserved with having most of its original details. Only known repairs are minor repairs through 20th century.

According to records, the complex was damaged in the 1766 earthquake. The inscriptions near the portal niche describe a restoration in the period of Sultan  Mustafa III (1757-1774) by Şükrullah Efendi. A later restoration of the madrasa was undertaken in 1835, in the time of Sultan Mahmud II (1808-1839). The most recent restoration dates to 1958 and 1970, and was undertaken by the General Directorate of Religious Endowments.

These scripts and photographs are registered under © Copyright 2018, respected writers and photographers from the internet. All Rights Reserved.
Posted by ISTANBUL, Extended On Two Continents at 11:33 AM