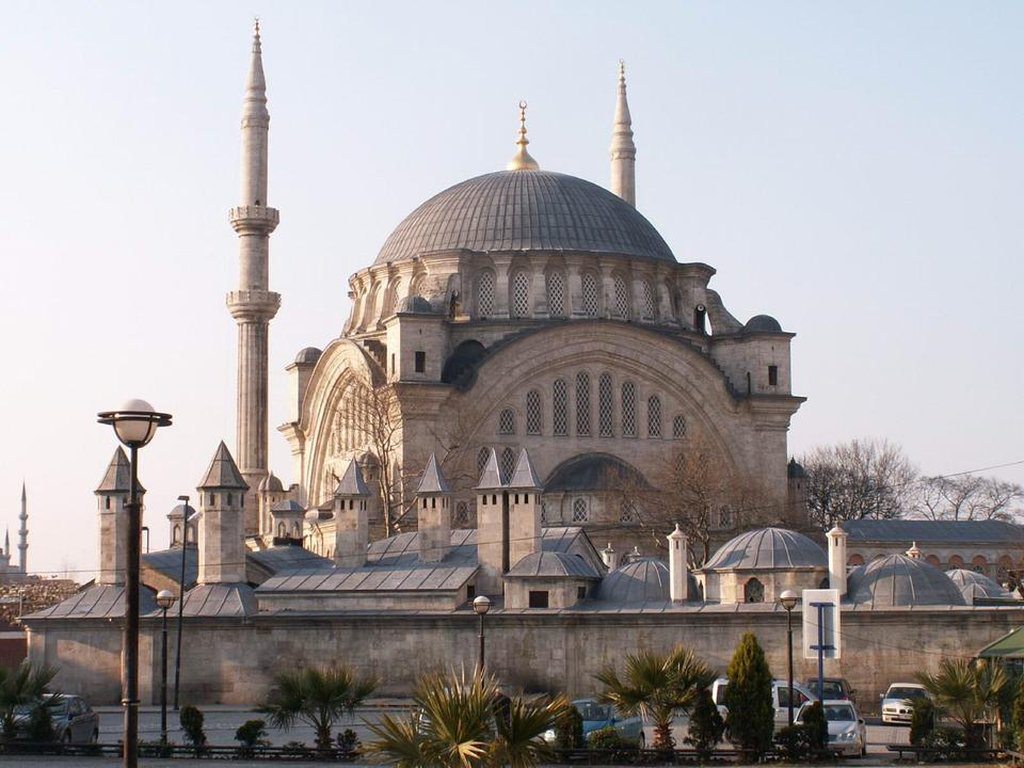 Nuruosmaniye Mosque Complex is an Ottoman mosque located in the Çemberlitaş neighbourhood of Fatih district in Istanbul. It is considered one of the finest examples of mosques in Ottoman Baroque style. It was built by architects Mustafa Ağa and Simon Kalfa from the order of Sultan Mahmut I and completed by his brother and successor Sultan Osman III. The architects adopted Baroque architectural elements, the mosque is also distinctive with the absence of an ablution fountain (Turkish: şadırvan). Nuruosmaniye Mosque is located near the entrance to the Kapalıçarşı (Grand Bazaar), Column of Constantine and the historical Atik Ali Paşa Mosque.

Nuruosmaniye Mosque Complex is located in Eminönü, north-west of the Çemberlitaş monument at the entrance to the Covered Bazaar. The construction of the complex was started by Sultan Mahmud I in 1749, but was not completed until a year after his death in 1755. The complex consists of a mosque, a medresse, a soup kitchen, a library, a mausoleum, a public fountain and fountain with a spout. It is in the Baroque style and includes the many shops that surround it.

The Nuruosmaniye Mosque is very distinctive from the point of view of Ottoman mosque architecture. Its three dimensional stone ornaments are unparalleled in world architecture and are a unique masterpiece of the Baroque style. It has a single dome encircled at its base with 32 windows. The mosque is illuminated by 174 windows. The most striking of the interior decorations are the lines of the walls and dome. There are two minarets each having two galleries. For the first time, a stone rather than lead crescent was used on top of the minarets.

The complex consists of a mosque (cami), madrasa (medrese), soup-kitchen (imaret), tomb (türbe), library (kütüphane) and water fountain or sabil (sebil), enclosed in an irreqular walled-in precinct, and a han and some stores (dükkan) built in the vicinity. The precinct is entered from two gates to the east and west. The western gate, called Carsikapisi or bazaar gate, opens into the covered bazaar with the sabil adjoining it.

The mosque, oriented along the northwest-southeast axis, occupies the northwest corner of the precinct, which is raised above street level on a tall basement. Beside it, at the northeast corner, are the library and the tomb. The madrasa and the soup kitchen are housed in a single structure that projects beyond the southern precinct wall. The accessory buildings are aligned loosely with the cardinal axis.

Construction on the Nuruosmaniye Complex began in 1749 during the rule of Mahmud I (1730-1754) and was completed by his brother and successor Osman III (1754-1757) in 1755. It is located to the east of the covered bazaar and was built to replace the Mascid of Fatma Hatun, which burnt in a fire. In style, the complex is distinguished from its precedents with its adoption of baroque design elements and embodies the westernizing vision of Mahmud I.

While there is little known about its architect, Simeon Kalfa, its construction is documented in detail by construction manager Ahmed Efendi in a booklet entitled "Tarih-i Cami-i Şerif-i Nur-i Osmani". The name Nuruosmaniye, or the Light of Osman, is thought to refer to Osman III and to a verse from the Sura of Al-Nur, "God is the light of the heavens and the earth", which is inscribed inside the dome.

The mosque consists of a single domed prayer hall, preceded by a courtyard of comparable size to the northwest. The courtyard is entered through a main portal to the northwest and two side portals. It has a unique semi-elliptical shape created with the use of wedge-segments placed between nine domed bays; it is also distinctive with the omission of an ablution fountain. Windows placed at two levels provide views outside. There is no ablution fountain. The five-bay mosque portico completes the courtyard arcade and leads into the prayer hall through a central portal.

The prayer hall is square with a semi-circular mihrab apse and is crowned with a large dome 25 meters in diameter and raised to a height of 43.50 meters on four monumental arches. The interior space is activated by wide galleries that surround it on three sides. There are no aisles; the space below the galleries is an exterior arcade and is accessed through two side doors with cascading steps. At three different places - the entrance and the two corners flanking the qibla wall - the galleries are widened to form balconies that project into the prayer hall carried on columns. The corner balconies are deepened further with the inclusion of arcade space; the one to the east is the sultan's lodge and has gilted latticework between its columns. It is accessed primarily by a ramp outside the mosque that allowed the sultan to ascend to his quarters on his horse.

The tympana of the grand arches, equal in height to the galleries, are braced with smaller concentric arches that help strengthen the structure. At the qibla wall, the small arch is joined with the semi-dome that covers the mihrab apse. Sixteen windows in each tympanum light up the interior, in addition to the numerous casement windows at the ground and gallery levels. There are twenty-eight more windows at the base of the dome. With the exception of the casements, windows are made of interlacing pieces of colored and plain glass.

The interior of the mosque is covered with gray marble panels up to the galleries where a thick structural cornice, inscribed with the Sura of Al-Fath, adorns and braces the structure. Below the gallery, calligraphic medallions crown each casement window. The baroque influence is conveyed through the extensive use of sculptural elements such as pilasters and cornices, and baroque motifs, such as garlands, finials and scallops. Going beyond mere imitation, the Nuruosmaniye mosque achieves one of the finest instances of Ottoman baroque, a unique synthesis between classical Ottoman and contemporary western styles that is epitomized in the scallop muqarnas domes crowning its portals.

On the exterior, the silhouette of the mosque is marked by the tall dome and domed arches rising dramatically above the courtyard walls amidst the low-lying market neighborhood. The curved outlines of the baroque buttresses that anchor the dome at its corners and the thick cornice that crowns the grand arches, dominate the architectural expression. The two minarets, attached at either end of the mosque portico, have fluted shafts with two balconies and stone caps. The mosque is primarily constructed of cut stone.

Madrasa and Soup-Kitchen
The madrasa is built on a traditional plan, and has twenty domed rooms and a large classroom (dersane) enveloping an arcaded courtyard. The soup-kitchen adjoins it to the west and is about half the size of the madrasa. Entered through a domed entryway to the north, the soup-kitchen is organized around an inner courtyard that gives access to the kitchens to the south and a dining room to the west, with the madrasa wall bounding it to the east.

Library
The library is a single-story building set on a high platform accessed by two sets of stairs located to the west that lead into separate entryways. An Arabic inscription above the entrance states: "Demand science, from the cradle to the grave." It has a cross-plan with widely rounded corners and consists of an elliptical reading room enveloped by an arcade made of fourteen columns. An additional storage room projects between the two staircases to the west; there is also a full basement.

The reading room is covered by a dome flanked by two semi-domes, and the arcade spaces have cross vaults. Thirty windows, placed at two levels, illuminate the interior. The bulbous footprint of the library is enhanced on the exterior with the play of pilasters and moldings. Opened in 1755 with eighteen employees, the Nuruosmaniye Library is a branch of the Süleymaniye Library today and contains personal collections of Sultan Mahmud I and Sultan Osman III with a total of 7600 volumes of which 5052 are manuscripts.

Tomb
The tomb is located slightly to the south of the library and was originally intended for Sultan Mahmud I, who is buried in the Tomb of Valide Turhan Sultan. Şehsuvar Valide Sultan, the mother of Sultan Osman III, was buried here in 1756. The tomb is a single domed room, preceded by a three-bay domed portico to the west. Its exterior appearance is marked by the curved outline of the portico and the large weight turrets that flank the dome at its four corners.

These scripts and photographs are registered under © Copyright 2018, respected writers and photographers from the internet. All Rights Reserved.
Posted by ISTANBUL, Extended On Two Continents at 11:36 AM