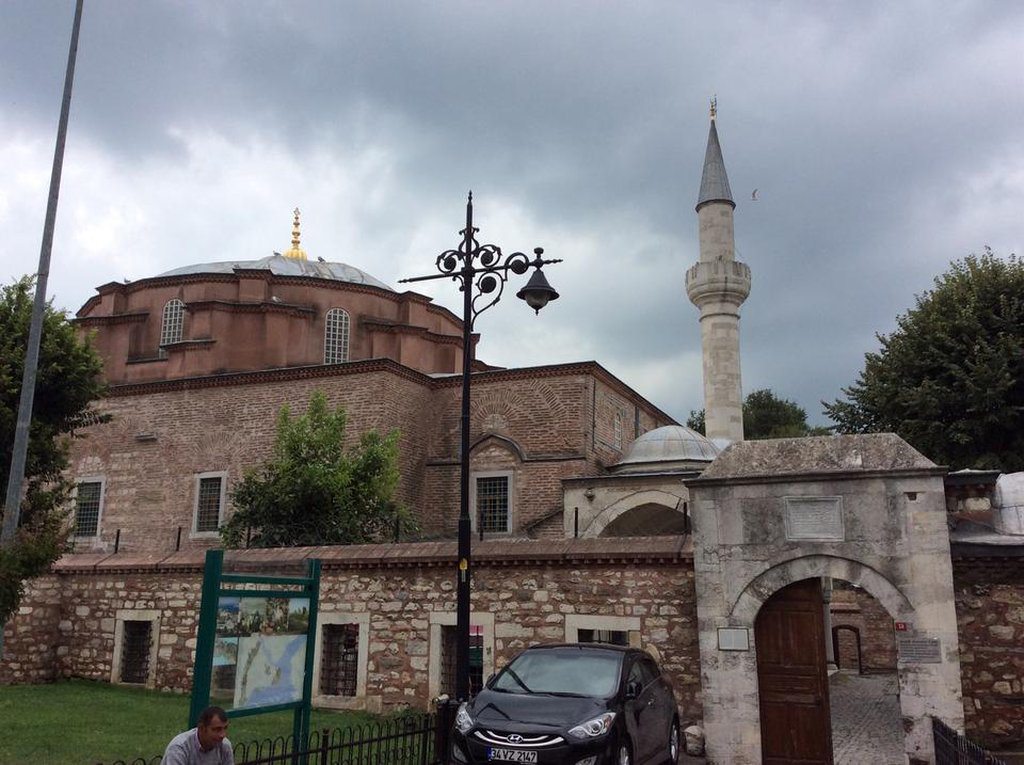 This Byzantine building with a central dome plan was erected in the sixth century by Justinian, likely was a model for Hagia Sophia (St. Sophia), and is one of the most important early Byzantine buildings in Istanbul. It was recognized at the time as an adornment to the entire city, and a modern historian of the East Roman Empire has written that the church, "by the originality of its architecture and the sumptuousness of its carved decoration, ranks in Constantinople second only to St. Sophia itself".

The Küçük Ayasofya Mosque is identified as the Church of Sts. Sergius and Bacchus, constructed by Justinian I (527-565) following his ascension to the throne and is often considered the pre-cursor to the Great Church of Hagia Sophia. It was built inside the sea walls along the Sea of Marmara and stood in close proximity to the Hormisdas Palace, Justinian's residence prior to his enthronement. Historical resources show that the church dedicated to the Sts. Sergius and Bacchus was built adjoining the north wall of an existing basilica dedicated to the Sts. Peter and Paul. The two churches shared a courtyard to the west and were surrounded by monastery buildings managed by the Monophysites.

Location
The building stands in Istanbul, in the district of Fatih and in the neighborhood of Kumkapı, at a short distance from the Marmara Sea, near the ruins of the Great Palace and to the south of the Hippodrome. It is now separated from the sea by the Sirkeci-Halkalı suburban railway line and the coastal road, Kennedy Avenue.

Byzantine period
According to later legend, during the reign of Justin I, his nephew Justinian had been accused of plotting against the throne and was sentenced to death, avoided after Saints Sergius and Bacchus appeared before Justin and vouched for Justinian’s innocence. He was freed and restored to his title of Caesar, and in gratitude vowed that he would dedicate a church to the saints once he became emperor. The construction of this Church of Saints Sergius and Bacchus, between 527 and 536 AD (only a short time before the erection of the Hagia Sophia between 532 and 537), was one of the first acts of the reign of Justinian I.

The new church lay at the border between the First and Τhird Regio of the City, in an irregular area between the Palace of Hormisdas (the house of Justinian before his accession to the throne) and the Church of the Saints Peter and Paul. Back then, the two churches shared the same narthex, atrium and propylaea. The new church became the center of the complex, and part still survives today, towards the south of the northern wall of one of the two other edifices. The church was one of the most important religious structures in Constantinople. Shortly after the building of the church a monastery bearing the same name was built near the edifice.

Construction of the new church began shortly before that of Hagia Sophia, built from 532 to 537. It was believed that the building had been designed by the same architects, Isidorus of Miletus and Anthemius of Tralles, as a kind of "dress rehearsal" for that of the largest church of the Byzantine Empire. However, the building is quite different in architectural detail from the Hagia Sophia and the notion that it was but a small-scale version has largely been discredited.

During the years 536 and 537, the Palace of Hormisdas became a Monophysite monastery, where followers of that sect, coming from the eastern regions of the Empire and escaping the persecutions against them, found protection by Empress Theodora. In year 551 Pope Vigilius, who some years before had been summoned to Constantinople by Justinian, found refuge in the church from the soldiers of the Emperor who wanted to capture him, and this attempt caused riots. During the Iconoclastic period the monastery became one of the centers of this movement in the City.

The nave is elaborately detailed with carved capitals, and the gallery entablature-inscribed with a poetic praise of Justinian and his wife, Theodora-has a delicate contour. To the west, the gallery joins an unadorned double-story narthex, separated only by a series of columns and piers. Three small bays, placed along the southern gallery, may have led into the adjoining Church Sts. Peter and Paul. This wall, as seen from the outside, is indeed the northern wall of the latter church that remains incorporated into the neighboring structure.

Ottoman period
After the Ottoman conquest of Constantinople in 1453, the church remained untouched until the reign of Sultan Bayezid II. Then (between 1506 and 1513) it was transformed into a mosque by Hüseyin Ağa, the chief of the Aghas (Black Eunuchs), who were the custodians of the Bab-ı-Saadet (literally The Gate of Felicity in Ottoman Turkish) in the Sultan's residence, the Topkapı Palace. At that time the portico and madrasah were added to the church. In 1740 the Grand Vizier Hacı Ahmet Paşa restored the mosque and built the Şadırvan (ablution fountain). The fountain was later removed in 1938. In 1762 the minaret was first built. It was demolished in 1940 and built again in 1956.

Damaged in the earthquakes of 1648 and 1763, the complex was repair by Sultan Mahmud II in 1831. If anything had remained from adjoining Church of Sts. Peter and Paul, it was removed during the construction of a railroad passing immediately to the south of the mosque in the 1860s, transforming the topography of the site. The architecture of the former church, despite modifications to its doors and windows, has largely remained intact.

Hüseyin Ağa, the chief officer of the Ottoman Palace during the rule of Sultan Bayezid II (1481-1512), added the Ottoman narthex and built twenty-four zawiya cells enclosing the courtyard of the new complex, which he endowed with income from a nearby public bath and two hans near the Hagia Sophia. His tomb (türbe), built after his execution in 1510, lies in the walled cemetery that wraps around the north and east sides of the former church.

The pace of decay of the building, which already suffered because of humidity and earthquakes through the centuries, accelerated after the construction of the railway. Parts of St. Peter and Paul to the south of the building were demolished to accommodate the rail line. Other damage was caused by the building's use as housing for the refugees during the Balkan Wars.

Due to the increasing threats to the building's static integrity, it was added some years ago to the UNESCO watch list of endangered monuments. The World Monuments Fund added it to its Watch List of the 100 Most Endangered Sites in 2002, 2004, and 2006. After an extensive restoration which lasted several years and ended in September 2006, it has been opened again to the public and for worship.

Exterior Architecture
The complex is entered through three gates, north, south and west, which lead into a courtyard enclosed by the U-shaped zawiya on three sides. An inscriptive plaque located above the northern gate bears a saying of the Prophet. Located to the east of the courtyard, the mosque is entered through a five-bay classical Ottoman portico that precedes the narthex. Its central plan is composed of an octagon inscribed in a rectangle; the domed octagonal nave is outlined by a continuous gallery on two floors, which envelops the nave to the north, west and south.

The galleries terminate on either end of an apsidal sanctuary projecting to the east. Composed of sixteen ribs with eight windows, the nave dome is supported on eight wide arches that fall on eight heavy piers forming an octagon. The space between the piers is spanned by twenty-eight marble columns, two in each bay with the exception of the sanctuary, that form the double-story gallery. The upper gallery columns are interlaced with small arches and wooden balustrades.

Columns at the four corners of the nave are arranged to form semi-circular niches that are crowned with semi-domes at the upper gallery level. The nave is elaborately detailed with carved capitals, and the gallery entablature-inscribed with a poetic praise of Justinian and his wife, Theodora-has a delicate contour.

The exterior masonry of the structure adopts the usual technique of that period in Constantinople, which uses bricks sunk in thick beds of mortar. The walls are reinforced by chains made of small stone blocks. The building, the central plan of which was consciously repeated in the basilica of San Vitale in Ravenna and served as a model for the famous Ottoman architect Mimar Sinan in the construction of the Rüstem Pasha Mosque, has the shape of an octagon inscribed in an irregular quadrilateral. It is surmounted by a beautiful umbrella dome in sixteen compartments with eight flat sections alternating with eight concave ones, standing on eight polygonal pillars.

The narthex lies on the west side, opposed to an antechoir. Many effects in the building were later used in Hagia Sophia: the exedrae expand the central nave on diagonal axes, colorful columns screen the ambulatories from the nave, and light and shadow contrast deeply on the sculpture of capitals and entablature. In front of the building there is a portico (which replaced the atrium) and a court (both added during the Ottoman period), with a small garden, a fountain for the ablutions and several small shops.

To the west, the gallery joins an unadorned double-story narthex, separated only by a series of columns and piers. Three small bays, placed along the southern gallery, may have led into the adjoining Church Sts. Peter and Paul. This wall, as seen from the outside, is indeed the northern wall of the latter church that remains incorporated into the neighboring structure. The mosque has a single minaret on the southwest corner, which dates from 1955.

Interior Architecture
Inside the edifice there is a beautiful two-storey colonnade which runs along the north, west and south sides, and bears an elegant inscription in twelve Greek hexameters dedicated to the Emperor Justinian, his wife, Theodora, and Saint Sergius, the patron-saint of the soldiers of the Roman army. For some unknown reason, Saint Bacchus is not mentioned. The columns are alternately of verd antique and red Synnada marble; the lower storey has 16, while the upper has 18. Many of the column capitals still bear the monograms of Justinian and Theodora.

Nothing remains of the original interior decoration of the church, which contemporary chroniclers describe as being covered in mosaics with walls of variegated marble. During the Ottoman conversion into a mosque, the windows and entrance were modified, floor level raised, and interior walls plastered.

The Küçük Ayasofya's interior is decorated and furnished as a mosque, with Arabic calligraphy and designs in blue painted on white walls. Originally, the walls and vault would have been completely covered in golden mosaics, like those that survive from this period in Ravenna, and probably frescoes as well.

Grounds
North of the edifice there is a small Muslim cemetery with the türbe of Hüseyin Ağa, the founder of the mosque.

These scripts and photographs are registered under © Copyright 2018, respected writers and photographers from the internet. All Rights Reserved.
Posted by ISTANBUL, Extended On Two Continents at 5:11 AM