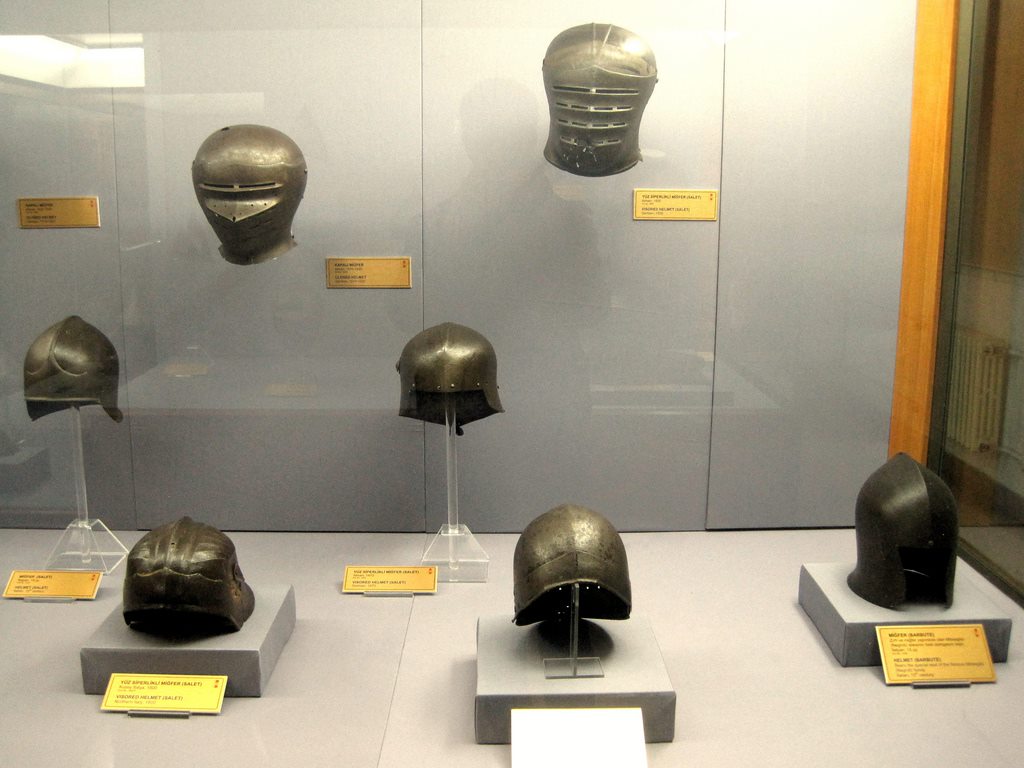 Constituonal Period Hall
At display, there is the official car in which the Military Minister and Grand Vizier Mahmut Şevket Pasha, one of the important actors of the Second Constitutional Monarchy period was waylaid and martyred on June 11, 1913 when leaving the Ministry of Naval Affairs. Additionally, arms and items presented to the person of Sultan Abdülhamit II and uniforms, arms and equipment belonging to famous people of the period such as Hüseyin Avni Pasha Army Commander, Ghazi Ahmet Muhtar Pasha and Tevfik Sağlam are also displayed in this hall.

The collection belonging to Demirci Mehmet Efe, one of the important militia of the War of Independence who launched the first resistance against Greeks in the Aegean and the model composition portraying Mustafa Kemal Atatürk issuing the command  "Armies, your first goal is the Mediterranean... Forward!" on the ridges of Eşme are worth seeing.

Korea And Cyprus Hall
This hall is dedicated to the Korean War (1950-1953) and the Cyprus Peace Operation (1974).  Uniforms belonging to Korea Brigade Commander, Brigadier General Tahsin Yazıcı, Regiment Commanders, Martyr Colonels Nuri Pamir and Celal Dora, starboards, medals and decorations are displayed in the Korean Section. Objects belonging to commanders taking part in the Cyprus Peace Operation and arms and uniforms acquired during the operation are exhibited in the Cyprus Section.

Etnography Hall
In this hall composed principally of silver, glass and porcelain items, non-military collections of the Military Museum are exhibited. The finesse of handcrafts can be observed with pleasure in these works such as fabrics, bibelots, accessories, sugar bowls, censers, cup sets, serving sets, serving trays, candelabra, clocks, and enam bowls that are a part of our daily lives.

Chiefs of General Staff Hall
This is a hall where uniforms, arms and some personal items belonging to all our Commanders of the Armed Forces who served since the founding of the Young Republic of Turkey and the plates and objects presented to them during their service are displayed.

Atatürk Hall
The Harbiye building, currently used as the Military Museum and Cultural Complex was built in 1841 in order to educate officers for the Ottoman Army. In this school which continued its function also after the founding of the Republic of Turkey many officers and commanders were educated for a period of nearly 100 years. Among these, the most important, beyond question, is the founder of the Republic of Turkey and the Great Statesman Mustafa Kemal Atatürk.

Thus,  Atatürk holds a very prominent place in the Military Museum. In this hall reserved for Atatürk; Atatürk's photographs, personal items, medals and decorations, objects presented to him and models of the 'Anıtkabir', his mausoleum, the Erzurum Congress Building, the Sivas Congress Building, the First Building of the Grand National Assembly, the Şişli Ataturk House and the house in Salonika where Atatürk was born are displayed.

Tents Gallery
The tent, which had an important place in the life of the Turkish Nations since the early period of history was also used during the Ottomans era and has developed throughout centuries maintaining its significance.The pole, or poles forming the backbone of the tent are made of wood and tent emblems symbolizing sovereignty are placed in the external sections.

The Ottomans made use of tents in wars; in the state administration units of the palace organization and in recreation and entertainment locations in daily life as well as for the needs of the judicial system and health requirements. The shape, size, material and decoration of tents varies by the social degrees of the owners.

Ottoman tents are grouped on the basis of their support systems. 'Sayebans' comprise a group as sunshades. The 'Otağı Humayun' , the Imperial Pavilion on the other hand, forms a separate and distinct group both in terms of its dimensions and decorations and in terms of its function. The finesse of the Ottoman adornment arts can be observed in the  'sayebans', single-pole tents, double-pole tents, tent sections, tent poles and finial ensigns displayed in the Military Museum 's  Tents Hall.

Selim III Stand (1789-1807)
The Selim III Stand exhibiting models of Selim III, among the Sultans of Ottoman and palace officials representing the then the apparel and accessories as real-like as possible is one of the lively stands of our museum.

"Armenian Problem with Documents" Hall
In the Documented Armenian Question Hall; the intent was to surface the truths behind the baseless Armenian claims by exhibiting the original documents and photographs related to the 'Tehcir' (Mandatory Relocation) Act which was passed in the year 1915 covering the war period.

Official reports related to the massacre the Armenians committed in Anatolia and the photographs of the innocent Turkish peoples, official correspondence evidencing the existence of Armenian citizens serving in the Ottoman Army even during the war, the Council of Minister's Decision related with the implementation of the Tehcir Act, the list showing the distribution of Armenian citizens by cities subjected to mandatory relocation and the bloody shirt of Grand Vizier Talat Pasha who was martyred in Berlin in the year 1921 are objects worth noting and considering.

Translations into Turkish and English of the original documents in Ottoman Turkish, displayed in the hall are also made available for the visitor on the on platforms in the same hall.

These scripts and photographs are registered under © Copyright 2017, respected writers and photographers from the internet. All Rights Reserved.
Posted by ISTANBUL, Extended On Two Continents at 1:02 PM