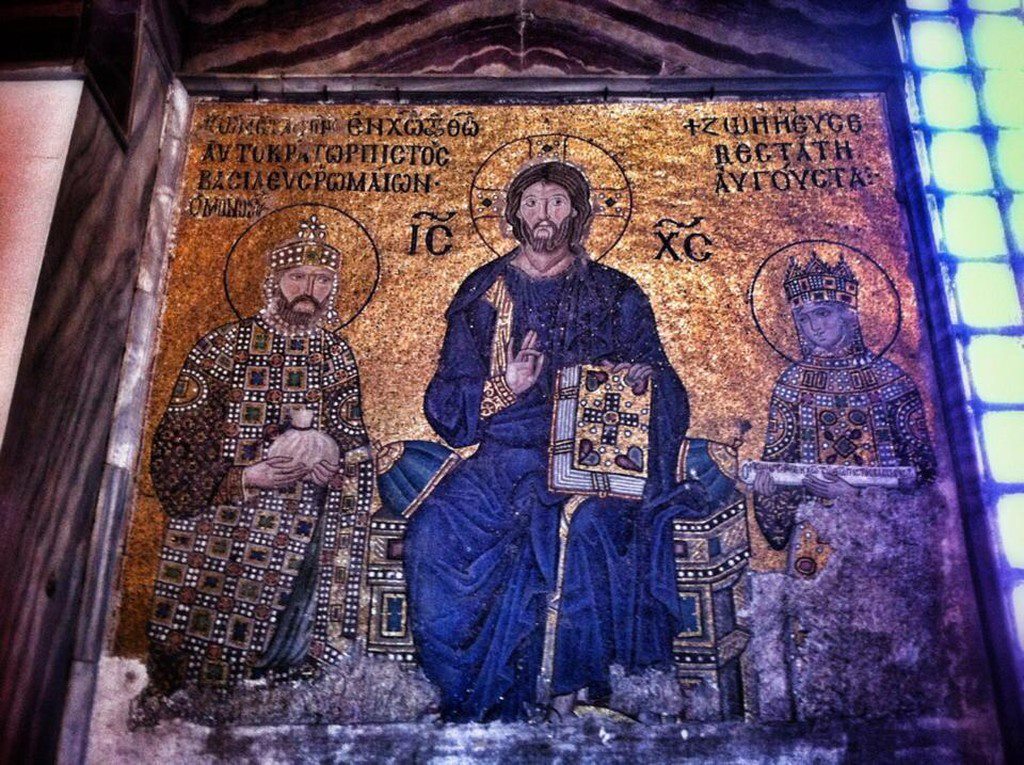 The church was richly decorated with mosaics throughout the centuries. They either depicted the Virgin Mother, Jesus, Saints, or emperors and empresses. Other parts were decorated in a purely decorative style with geometric patterns. During the Sack of Constantinople in 1204, the Latin Crusaders vandalized the valuable items in every important Byzantine structure of the city, including the golden mosaics of the Hagia Sophia. Much of these valuable items were shipped to Venice, whose Doge, Enrico Dandolo, had organized the invasion and sack of Constantinople.

Following the building's conversion into a mosque in 1453, many of its mosaics were destroyed or covered with plaster, due to Islam's ban on representational imagery. This process was not completed at once, and reports exist from the 17th century in which travellers note that they could still see Christian images in the former church. In 1847-49, the building was restored by two Swiss brothers, Gaspare and Giuseppe Fossati, and Sultan Abdülmecid allowed them to also document any mosaics they might discover during this process.

This work did not include repairing the mosaics and after recording the details about an image, the Fossatis painted it over again. This work included covering the previously uncovered faces of two seraphim mosaics located in the centre of the building. The building currently features a total of four of these images and two of them are restorations in paint created by the Fossatis to replace two images of which they could find no surviving remains. In other cases, the Fossatis recreated damaged decorative mosaic patterns in paint, sometimes redesigning them in the process.

The Fossati records are the primary sources about a number of mosaic images now believed to have been completely or partially destroyed in an earthquake in 1894. These include a great mosaic of Christ Pantocrator in the dome, a mosaic over a now unidentified Door of the Poor, a large image of a jewel-encrusted cross and a large number of images of angels, saints, patriarchs, and church fathers. Most of the missing images were located in the building's two tympana. The Fossatis also added a pulpit (minbar) and the four large medallions on the walls of the nave bearing the names of Muhammad and Islam's first caliphs.

VI. Leon Mosaic
The Pantakrator mosaic embellished with a Jesus figure, placed on the Emperor Door presents Jesus hallowing with his right hand and holding an open bible with his left hand. Written on the bible are the Greek words ‘May Peace Be with You.I Am the Divine Light’. The right medallion holds the figure of Gabriel while the left medallion holds one of Virgin Mary. Below the feet of Christ, in a prayer position is Emperor Leon VI. ( 816- 912) of Eastern Rome. The mosaic dates back to the 10th century.

Sunu Mosaic
Located in the inner narthex, on the Southern vestibule door is one of Hagia Sophia’s most prominent figured mosaics. This mosaic was discovered during the repair process that Fossati held in 1849. The base of the symmetrical mosaic panel is composed of gold leafs, and features Virgin Mary on a backless throne with the words METER and THEOU, an abbreviation stating ‘God Bearer’, engraved on both sides. On Mary’s lap is baby jesus. On her left is the creator of the city, Emperor Konstantinos I. holding a maquette representative of İstanbul.

Apse Mosaic
In the centre of the quarter dome is the figure of Virgin Mary (Theotokos) seated on a throne with jewelled cushions, holding baby Jesus. This mosaic is significant as it is the first figured mosaic created following the iconoclasm period of Hagia Sophia.

Mosaic of the Virgin and Child (in the apse)Virgin and Child: this was the first of the post-iconoclastic mosaics. It was inaugurated on 29 March 867 by Patriarch Photios and the emperors Michael III and Basil I. This mosaic is situated in a high location on the half dome of the apse. Mary is sitting on a throne without a back, holding the Child Jesus on her lap. Her feet rest on a pedestal. Both the pedestal and the throne are adorned with precious stones.

These mosaics are believed to be a reconstruction of the mosaics of the sixth century that were previously destroyed during the iconoclastic era. The mosaics are set against the original golden background of the 6th century. The portraits of the archangels Gabriel and Michael (largely destroyed) in the bema of the arch also date from the 9th century.

Two Angels on the Apses
On the right of the apses arch is a Gabriel mosaic, and on the left is a Mikhael mosaic. Only the wing and the edge of Mikhael’s feet are visible in present day. The mosaics date back to the second half of the 9th century.

Dome Angel Figures
The pendentives feature four unidentical angel figures. It is believed that these one headed six winged angels (seraphim) protect the Lord’s Throne in Heaven. The angels featured in the East are composed of mosaics whereas the two in the West have been damaged during the Eastern Roman period and have been renewed as fresco. The faces of the angel figures featured on the pendentives were covered up with star shaped metallic lids during the Ottoman period. During the mosaic renovations in 2009, the lids covering the angel figures’ faces were opened and revealed.

Patriarch Mosaics on the Tympanum
Covering the structure’s Western tympanum are mosaic made Patriarch figures inside niches. To this day, only three of the figures remain in good condition. Istanbul’s Patriarchs Young İgnatios is in the first niche, Saint İoannes Khrysostomos on the fourth and Antioch’s Patriarch Saint İgnatios Theophoros on the sixth. The mosaic pieces seen on the seventh niche are believed to belong to Athanasios. Although the exact dates for the mosaics are unknown, they are presumed to date back to 9-10 century.

Mosaic in the northern tympanon depicting Saint John ChrysostomThe northern tympanon mosaics feature various saints. They have been able to survive due to the very high and unreachable location. They depict Saints John Chrysostom and Ignatius the Younger standing, clothed in white robes with crosses, and holding richly jewelled Holy Bibles. The names of each saint is given around the statues in Greek, in order to enable an identification for the visitor.

Deisis Composition
On the western wall of Northern gallery, there is the mosaic board where the Deisis stage, considered as the start of renaissance in East Rome painting, is located. In the portrayol, Ioannes Prodromos (John the Baptist) on the right and Virgin Mary on the left and in the middle Pantocrator Jesus Christ are located. In the mosaic, Virgin Mary and John the Baptist's prayers to Jesus Christ for the mercy of people during the doomsday are portrayed. Both 3 figures carry the characteristics of Hellenistic Era portrayol art.

Deisis board takes attention by the way the mosaic technic and the portrayol have been done. It is a very successful piece in terms of dynamism and color choices. This mosaic is one of the best examples, which main principles of Ancient era painting in East Rome art, are reflected. There are several debates regarding the exact dating of Deisis Mosaic but the valid date that is currently accepted is the 12th Century.

Komnenos Mosaic
Emperor II. Ioannes Komnenos, his wife Hugarian origin Eirene and their son II. Aleksios are placed in the mosaic. In the middle of the composition you can see Virgin Mary standing with Jesus Christ in her arms. Writing around the emperor's head says "Emperor of Romans Porphyrogennetos Komnenos" (born in porphyry saloon) and this writing is an indication of loyalty that he was born during his father's reign. The writing around the empress's head says "Religious Augusta Eirene".

Empress Eirene was the daughter of Hungarian King Laszlo and she was portrayed as typical Middle European with braided ginger hair, colored eyes, white skinned and ruddy cheeks. On the side of the board you can see Prince II. Aleksios who was partnered to the crown by his father in 1222 and died at a young age from illness. In the mosaic you can see the prince's essential lineaments shrunk and pale face because of the illness. This mosaic board symbolizes the donations made by the emperor's family for the restorations of Hagia Sophia. Mosaic board dates back to 12th century.

There is a more realistic expression in the portraits instead of an idealized representation. The empress is shown with plaited blond hair, rosy cheeks and grey eyes, revealing her Hungarian descent. The emperor is depicted in a dignified manner.

Zoe Mosaic
Emperor IX. Konstantinos Monomakhos (1042-1055) and Empress Zoe are placed in the mosaic board. The writing on top of Emperor's head says "Romans' Religious Emperor, Servant of God's Jesus Konstantinos Monomakhos". The writing on top of Empress's head says "Devoutly Religious Agusta Zoe". On both sides of Pantocrator Jesus, king of the world, there are the initials of Jesus Christ IC and XC monograms. This mosaic board symbolizes the donations made by the emperor's family for the restorations of Hagia Sophia. Mosaic board dates back to 11th century.

He is offering a purse, as symbol of the donation he made to the church, while she is holding a scroll, symbol of the donations she made. The inscription over the head of the emperor says : "Constantine Monomachos, the pious ruler of Romans and the servant of God's Jesus". The inscription over the head of the empress reads as follows : "Very pious Augusta Zoe". The previous heads have been scraped off and replaced by the three present ones. Perhaps the earlier mosaic showed her first husband Romanos III Argyros or her adopted son Michael IV. Another theory is that these mosaics were made for an earlier emperor and empress, with their heads changed into the present ones.

Emperor Alexander Mosaic
The Emperor Alexander mosaic is not easy to find for the first-time visitor, located in the upper parts close to the ceiling. It depicts Emperor Alexander in full regalia, holding a skull in his left hand. Emperor Alexander Mosaic (912-913) is in the southwest of the north gallery. This mosaic is made on a blind corner on the contrary of the other mosaics in panel structure which expose a full view. As a weak character of East-Roman history who is figured in groveling position on the Emperor Door, Alexander was just the brother of Leon VI who shared his reign with his brother. It is one of the most intact Hagia Sophia mosaics which has reached today in terms of its location. This mosaic has been dated to the 10th century.

Mosaics in the Priest Rooms
In this called as the priest room, Deisis Compositionnda, Christ, and the Virgin Mary mosaics on the pediment of the door opening to the gallery have been reached today completely intact, while John the Baptist (Ioannes) mosaic is spoiled. Besides, the decoration patterns in this section consisting of wide branch convolutions dated to the 6th century and the apostles mosaics within other figurative mosaics, namely Petrus, Andreas, Lukas, Simon Zeoletes as well as the mosaics supposed to be portraying Zechariah, Helena the mother of Constantine I within the other figurative mosaics did not able to reach today in complete. This section is closed to visiting, since it is used for storing icons and Church Articles.

These scripts and photographs are registered under © Copyright 2017, respected writers and photographers from the internet. All Rights Reserved.
Posted by ISTANBUL, Extended On Two Continents at 8:11 AM