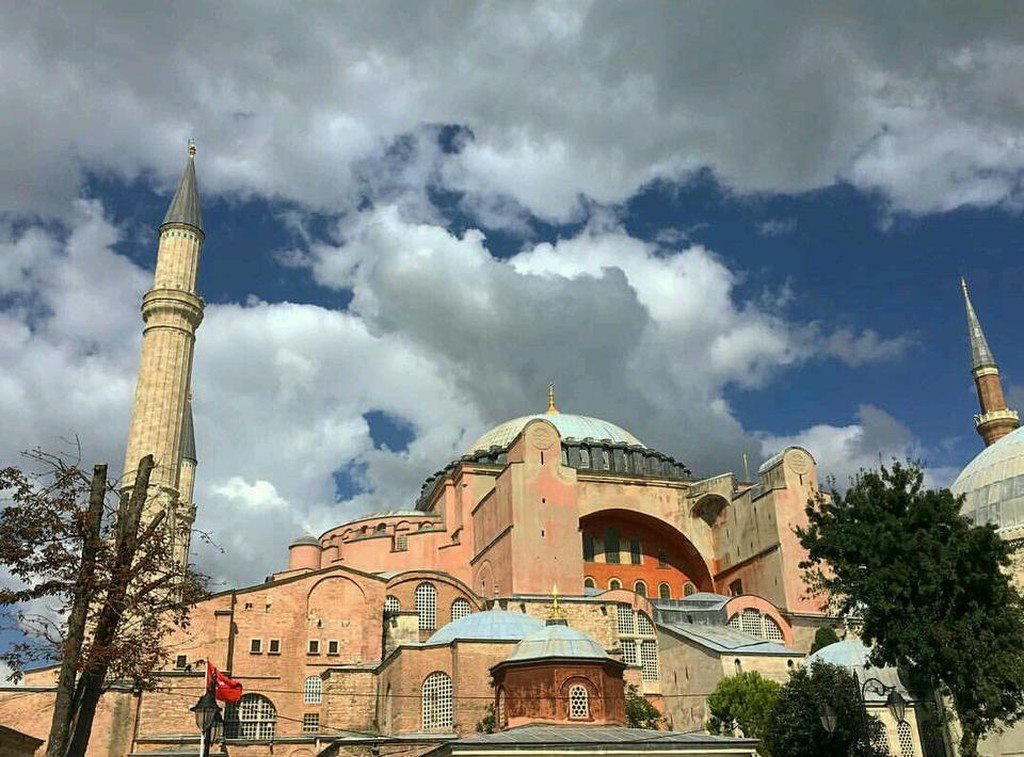 Hagia Sophia is the one of the most visited museums and most prominent monuments in the world in terms of art and the history of architecture. It has also been called "the eighth wonder of the world" by East Roman Philon as far back as the 6th century.

The current Hagia Sophia is the third construction, done in a different architectural style, even though it occupies the same location as the previous two. The original building was constructed by the most important architects of the period (527-565), Anthemios (Tralles) and Isidoros (Miletus), under the order of Emperor Justinianos. It is mentioned in the resources that during its construction period, the two prominent architects each had 100 architects working under them, who in turn had 100 workers each working under them.

The construction of the Hagia Sophia began on February 23, 532. It was completed before long, approximately within 5 years and 10 months. It was then opened to divine service with a great ceremony on December 27, 537. It was used as a church for 916 years but, following the conquest of Istanbul by Fatih Sultan Mehmed, the Hagia Sophia was converted into mosque. Afterwards, it was used as a mosque for 482 years. Under the order of Atatürk and the decision of the Council of Ministers, Hagia Sophia was converted into a museum in 1935.

Hagia Sophia is open for visit every day except Mondays. The winter visiting hours for the Hagia Sophia are from 09.00 to 17.00, with the final entry being at 16.00. During the summer, the visiting hours are between 09.00 and 19.00, with the final entry being at 18.00. Passes are available at the box office in the museum. The Hagia Sophia, one of the historical architectural wonders that still remains standing today, has an important place in the art world with its architecture, grandness, size and functionality.

The Hagia Sophia, the biggest church constructed by the East Roman Empire in Istanbul, has been constructed three times in the same location. When it was first built, it was named Megale Ekklesia (Big Church); however, after the fifth century, it was referred to as the Hagia Sophia (Holy Wisdom). The church was the place in which rulers were crowned, and it was also the biggest operational cathedral in the city throughout the Byzantine period.

The first church was constructed by Emperor Konstantios (337-361) in 360. The first church was covered with a wooden roof and expanded vertically (basilica) yet was burned down after the public riot that took place in 404 as a result of the disagreements between Emperor Arkadios’ (395-408) wife empress Eudoksia and Istanbul’s patriarch Ioannes Chrysostomos, who was exiled.

The patriarch’s mosaic portrait can still be viewed at the tymphanon wall located in the northern part of the church. No remains have been recovered from the first church; however, the bricks found in the museum storage branded ‘Megale Ekklesia’ are predicted to belong to the first construction. The second church was reconstructed by Emperor Theodosios II (408-450) in 415. This basilical structure is known to contain five naves and a monumental entrance; it is also covered by a wooden roof.

The church was demolished in January 13, 532, after the public riot (Nika revolts) that took place during the fifth year of Emperor Justinianos’ reign (527-565), when the ‘blues’ who represented the aristocrats, and the ‘greens’ who represented the tradesman and merchants in the society, collaborated against the Empire.

Remains found during the excavations led by A. M Scheinder of the Istanbul German Archeology Institute, 2 meters below ground level, include steps belonging to the Propylon (monumental door), column bases and pieces with lamb embossings that represent the 12 apostles. In addition, other architectural pieces that belong to the monumental entrance can be seen in the west garden.

The current structure was constructed by Milet and Tralles, who were renowned architects of their time, by Emperor Justinianos’s (527-565) orders. Information from historian Prokopios states that the construction that began on February 23, 532, was completed in a short period of five years and the church was opened to worship with a ceremony on December 27, 537. Resources show that on the opening day of the Hagia Sophia, Emperor Justinianus entered the temple and said, “My Lord, thank you for giving me chance to create such a worshipping place,” and followed with the words “Süleyman, I beat you,” referring to Süleyman’s temple in Jerusalem.

The third Hagia Sophia construction combined the three traditional basilical plans with the central dome plan in design. The structure has three nefi, one apsi, and two narthex, internal and external. The length from the apsis to the outer narthex is 100 m, and the width is 69.5 m. The height of the dome from the ground level is 55.60 m and the radius is 31.87 m in the North to South direction and 30.86 in the East to West direction.

Emperor Justinianos ordered all provinces under his reign to send the best architectural pieces to be used in the construction so that the Hagia Sophia could be bigger and grander. The columns and marbles used in the structure have been taken from ancient cities in and around Anatolia and Syria, such as, Aspendus Ephessus, Baalbeek and Tarsa.

The white marbles used in the structure came from the Marmara Island, the green porphyry from Eğriboz Island, the pink marbles from Afyon and the yellow from North Africa. The decorative interior wall coatings were established by dividing single marble blocks into two and combining them in order to create symmetrical shapes. In addition, the structure includes columns brought in from the Temple of Artemis in Ephessus to be used in the naves, as well as 8 columns brought from Egypt that support the domes. The structure has a total of 104 columns, 40 in the lower and 64 in the upper gallery.

All the walls of the Hagia Sophia except the ones covered by marble have been decorated with exceptionally beautiful mosaics. Gold, silver, glass, terra cotta and colorful stones have been used to make the mosaics. The plant-based and geometric mosaics are from the 6th century, whereas the figured mosaics date back to the Iconoclast period.

During the East Roman period, the Hagia Sophia was the Empire Church and, as a result, was the place in which the emperors were crowned. The area that is on the right of the naos, where the flooring is covered with colorful stones creating an intertwining circular design (omphalion), is the section in which the Eastern Roman Emperors were crowned.

Istanbul was occupied by Latins between 1204 and 1261, during the Holy Crusades, when both the city and the church were damaged. The Hagia Sophia was known to be in bad condition in 1261, when Eastern Rome took over the city again.

Following Fatih Sultan Mehmet’s (1451-1481) conquer in 1453, Hagia Sophia was renovated into a mosque. The structure was fortified and was well protected after this period, and remained as a mosque. Additional supporting pillars were installed during the East Roman and Ottoman periods as a result of the damage that the structure experienced due to earthquakes in the region. The minarets designed and implemented by Mimar Sinan have also served to this purpose.

A madrasah was built towards the North or Hagia Sophia during Fatih Sultan Mehmed’s reign. This construction was abolished in the 17. Century. During Sultan Abdülmecid’s (1839-1861) reign, renovations were conducted by Fossati and a madrasah was rebuilt in the same place. The remains have been discovered during the excavations in 1934.

During the 16th and 17th century Ottoman period, mihrabs, minbar, maksoorahs, a preachment stand and a muezzin mahfili (a special raised platform in a mosque, opposite the minbar where a müuezzin kneels and chants in response to the imam’s prayers) were added to the structure.

The bronze lamps on two sides of the mihrab have been given as gifts to the mosque by Kanuni Sultan Süleyman (1520-1566) after his return from Budin.

The two marble cubes dating back to the Hellenistic period (30-330 B.C.) on both sides of the main entrance have been specially brought from Bergama and were given by Sultan Murad III (1574-1595) as gifts.

During the Sultan Abdülmecid period between 1847 and 1849, an extensive renovation in the Hagia Sophia was conducted by the Swiss Fossati twins, where the Hünkâr Mahfili (a separate compartment where the emperors pray) located in a niche in the Northern section was removed and another one towards the left of the mihrab was built.

The Hagia Sophia was converted into a museum by goverment's orders and has been functioning as one since February 1, 1935, welcoming both local and foreign visitors. According to a deed dated 1936, the Hagia Sophia is registered as “Ayasofya-i Kebir Camii Şerifi on behalf of the Fatih Sultan Mehmed Foundation for maoseleum, akaret, muvakkithane and madrasah on 57 pafta, 57 island and 7th parcel.”

These scripts and photographs are registered under © Copyright 2017, respected writers and photographers from the internet. All Rights Reserved.
Posted by ISTANBUL, Extended On Two Continents at 12:00 PM