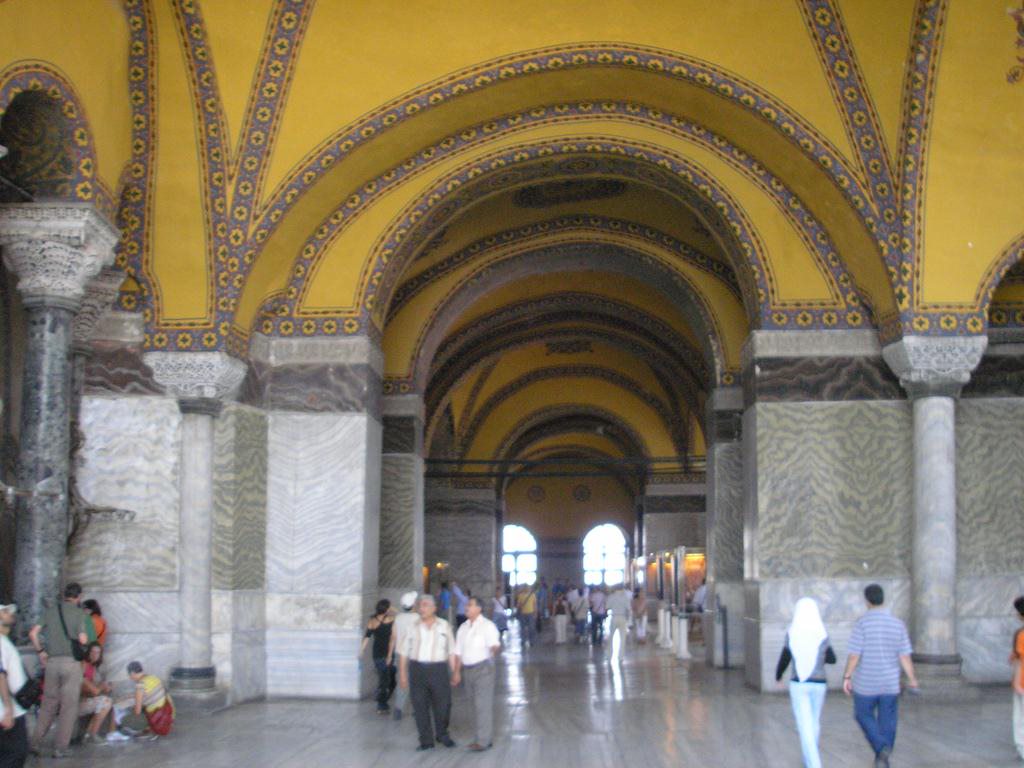 Sultan Tombs in Hagia Sofia
There are five tombs of Ottoman sultans within the graveyard at southeast Hagia Sophia. These are Sultan Selim II and princes Sultan Murad III, Sultan Mehmed III as well as Sultan Mustafa I and Sultan Ibrahim.

Fountain
Hagia Sophia Fountain built by Sultan Mahmud I (1730 - 1754) in 1740 is a masterpiece of Ottoman Architecture and one of the largest and most beautiful fountains in Istanbul. It is covered by a dome and an eave mounted on eight columns with muqarnas headings and eight arches. On the dome, there are a bronze tulip scripture of "Allah" written by carving in stack on top and a mirror scripture of "Muhammed" below and an "eulogium" on the upper and inner part of marble arcade.

The fountain has 16 slices and each slice have bronze taps in the middle. There are tulip-shape bronze banners containing the scripture of "We have created everything from water" on the upper part of the joining section of sliced bronze water mains over the taps.

Timing Room (Muvakkithane)
One of the extant 29 timing rooms built in Ottoman period - out of 38 in total - for providing prayer time to public is in Hagia Sophia. The structure had been built by Fossatti Brothers in 1853 who managed to repair Hagia Sophia in the period of Sultan Abdülmecid (1839 - 1861). It is one of the most magnificent buildings among its type of timing rooms.

The building has a square layout and meshed walls made of face stone. The entrance is on the north façade. There is a round table made of monolithic marble with marble legs in the middle of the timing room. The windows are managed to large in order have the clock placed over the table for pendulum adjustment and the other clocks inside visible for everybody outside. Some of the legged big clocks located in the timing room during mosque period are preserved in the storage of the museum. The building is currently used as a Museum Office.

Public Fountains
Public fountains are structures built contiguous to mosques with a special architecture for charitably distributing water to the public. There are two public fountains built in Hagia Sophia for this purpose.

One of them is at the right of Vestibule Door exit to yard and adjacent to the main outer wall at southwest. The built date and sponsor is ambiguous, but it is dated to 18th century based on its architectural style. It is coated with marble. There is an incumbent room toward the door at the back and there are two rectangular windows surrounding the room. Water mains on the windows are cast-iron carved.

The second public fountain in Hagia Sophia reflecting the Ottoman Classical architecture is built by Sultan İbrahim (1640-1648) on the southeast corner of the wall of outer yard of Hagia Sofia. It has three windows with marble carvings. Each window has arched sections at their lower parts for water distribution.

Minarets
Minarets are structures designed higher than the main building and constructed for notifying invitation for prayer and for announcements. Fatih Sultan Mehmed had made a wooden minaret over one of the half domes right after converting Hagia Sophia into a mosque. This minaret did not manage to reach the present day. The brick minaret at the southeast can be dated to Fatih Sultan Mehmed period or Beyazıd II period in terms of its order.

The minaret at the Bab-ı Humayun side is estimated to be built by Architect Sinan in Selim II period based on the similarity with the minarets of Selimiye Mosque in Edirne. As for the identical minarets at the southwest and northwest direction, they are built by Architect Sinan in Sultan Murat III period. With their 60 meters of height as well as their thick and massif patterns, they are completing main structure of Hagia Sophia. Various ornaments are added on these minarets at repairs carried out in 15th, 16th, and 19th centuries reflecting the characteristics of their periods.

Buttresses
The walls of Hagia Sophia faced the risk of evolving outside both in East-Roman and Ottoman periods because of the weight of its dome. The pressure of the main dome on various directions had been tried to be met by the half domes extended with exedras at east and west, the columns of lateral naves, arcades and cross vaults connecting to these each other; however these were not sufficient. First East-Romans, then Ottomans had prevented the pressure of dome by building external buttresses.

Architect Sinan had reinforced the spaces between grades and lateral walls by arches in order to solve this problem; furthermore he had supported the structure by building heavy buttress walls. Besides, the supporting walls of East-Roman period had been re-built and taken in stone protections. There are 24 buttresses in Hagia Sophia.

Almshouse
Hagia Sophia Almshouse was a charity built by Sultan Mahmud I (1730-1754) in 1743 at the northeast of Hagia Sophia for distributing food to poor and orphan people. There are repair epigraphs over the doors of almshouse regarding to repairs carried out in different dates. The big ceremony door of the almshouse at the Bab-ı Humayun direction is one of the best examples of baroque style in İstanbul. There is an epigraph dated 1155 on this door written by Calligrapher Beşir.

Fatih Madrasah
Fatih Sultan Mehmed built rooms, a tradition house and a madrasah for 150 students to live in. The madrasah was not adjacent to Hagia Sophia; on the other hand there was a covered passing in between. According to the current remnants, there were a rectangular layout, 46 cells in inner court and also a vaulted water distribution structure in the middle of the large court. The famous Turkish scientist Ali Kuşçu had been a professor of this Madrasah. Being the professor of Hagia Sophia was an important duty.

Madrasah destroyed during the landscape designing in 1869-1870 during Sultan Abdulaziz period and  a new madrasah built on  the foundations of the old one in  1874 and one more layer was added on it. There were 22 cells around two courts in this madrash.The building had been used until 1924; it had been pulled down in 1936. The remnants of foundations revealed by excavations in 1983.

These scripts and photographs are registered under © Copyright 2017, respected writers and photographers from the internet. All Rights Reserved.
Posted by ISTANBUL, Extended On Two Continents at 8:03 AM