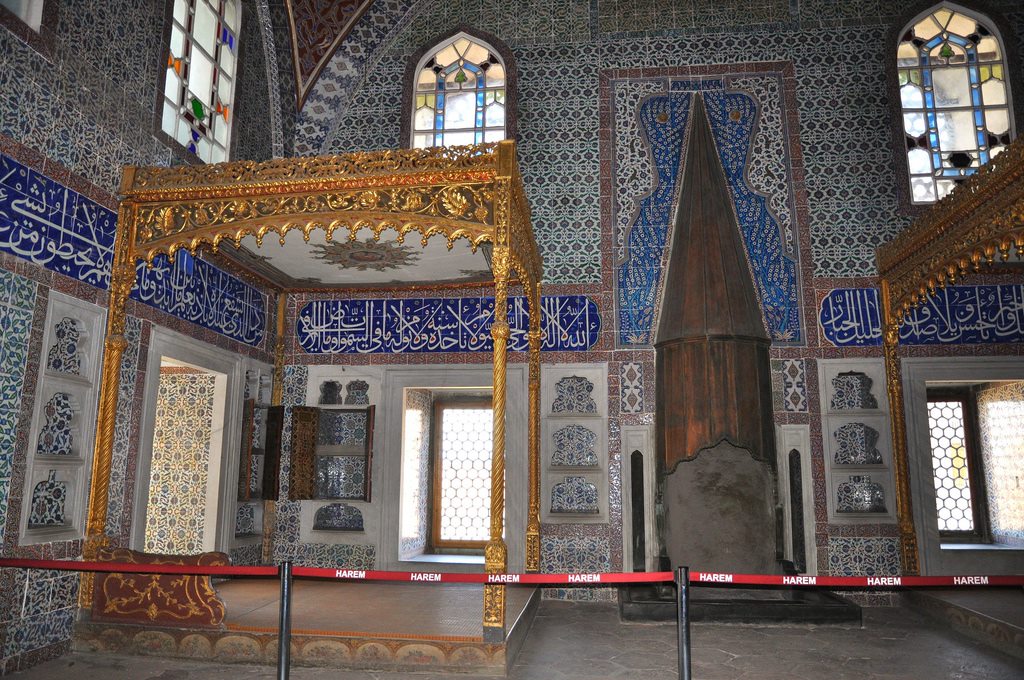 The Privy Chamber of Sultan Murat III (III. Murat Has Odası) dated to the first construction period (1578 and 1590) of the Harem, is the oldest and finest surviving room in the Harem, having retained its original interior. It was erected in 1579 on the orders of Sultan Murat III by the master architect Sinan, on the emplacement of the former privy chamber believed to have belonged to Sultan Süleyman the Magnificent.

The structure was utilized for several centuries as the private quarters and reception hall of the Ottoman monarchs.  It is one of the most splendid examples of the classical Ottoman architecture of the late 16th century.

The interior details of the pavilion are symmetrical. The main hall is endowed with a large dome, slightly smaller than that of the Throne Room, resting on monumental arches. The large dome symbolizes the permanency of the Ottoman monarchs. It also has a domed entrance platform. The interior of the main hall is decorated with blue-and-white and coral-red 16th century Iznik tiles.

There is also a large indoor pool under the kiosk. A belt of inscriptional tiles runs around the room above the shelf and door level. It is inscribed in white calligraphic characters on a blue background with the most famous verse of the Qur'an, the Throne Verse or Ayatul Kursi, the 255th verse (ayet) of the second chapter (sure) Al-Baqara. There are arched triple-niches between the deep windows with marble jambs.

Rumi (a style of ornamentation widely used by the Seljuks of Anatolia, of Rum) and palmette decorations manufactured by using the malakari technique (painting with plaster reliefs) ornament the inside of the dome and its pendentives. The dome rim is decorated with the same patterns carved in marble relief.  The monumental fireplace with a gilded tombac hood stands opposite a two-tiered ornamental fountain built into the wall (selsebil) skilfully decorated in coloured marble.

The Privy Chamber of Murat III (III. Murad Has Odası) is the oldest and finest surviving room in the harem, having retained its original interior. It was a design of the master architect Sinan and dates from the 16th century. Its dome is only slightly smaller than that of the Throne Room. Its hall has one of the finest doors of the palace and leads past the wing of the crown princes (Kafes).

The room is decorated with blue-and-white and coral-red İznik tiles. The rich floral designs are framed in thick orange borders of the 1570s. A band of inscriptional tiles runs around the room above the shelf and door level. The large arabesque patterns of the dome have been regilded and repainted in black and red.

The large fireplace with gilded hood (ocak) stands opposite a two-tiered fountain (çeşme), skilfully decorated in coloured marble. The flow of water was meant to prevent any eavesdropping, while providing a relaxed atmosphere to the room. The two gilded baldachin beds date from the 18th century.

These scripts and photographs are registered under © Copyright 2018, respected writers and photographers from the internet. All Rights Reserved.
Posted by ISTANBUL, Extended On Two Continents at 2:22 AM