FLATS OF THE CROWN PRINCE 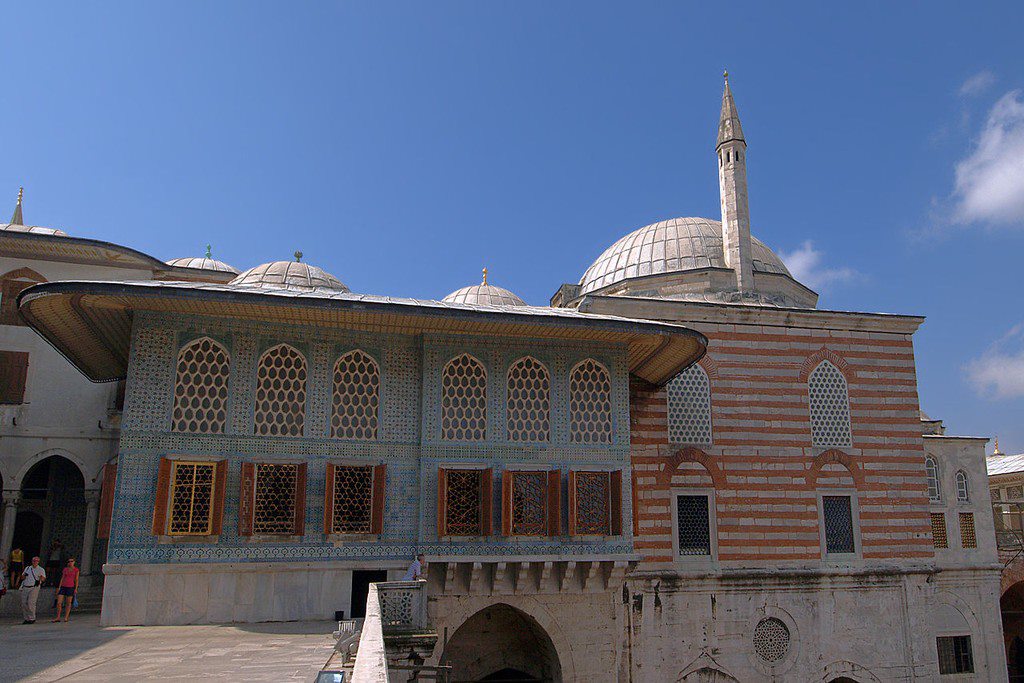 The Twin Kiosk / Flats of the Crown Prince (Çifte Kasırlar / Veliahd Dairesi) consists of two privy chambers both with classical fireplaces, built in the 17th century, at different times. The two rooms date from the reign of Sultan Murat III, but are more probably from the reign of Sultan Ahmed I. These chambers represent all the details of the classical style used in other parts of the palace. The pavilion has been completely redecorated and most of the Baroque woodwork has been removed.

The building is connected to the palace and consists of only one storey built on an elevated platform to give a better view from inside and shield views from the outside. One of the units is domed; the other has a wooden ceiling. The ceiling is not flat but conical in the kiosk style, evoking the traditional tents of the early Ottomans. As in tents, there is no standing furniture but sofas set on the carpeted floor on the side of the walls for seating. These chambers represent all the details of the classical style used in other parts of the palace.

The hall located at the entrance is thought to have been built by Sultan Murat IV; and the one situated inside is believed to have been built by Sultan Mehmet IV. The Twin Kiosk has been used as the privy chamber of the Crown Princes from the 18th century onwards. The crown prince (Şehzadeler) lived here in seclusion, therefore the apartments were also called kafes (cage).

The decorative tiles, reflecting the high quality craftsmanship of the İznik tile industry of the 17th century, were removed in accordance with the original concept and replaced with modern copies. The paintwork of the wooden dome is still original and is an example of the rich designs of the late 16th/early 17th centuries. The fireplace in the second room has a tall, gilded hood and has been restored to its original appearance.

The walls are adorned with two superimposed rows of windows grouped in sets of three. The stained glass pointed arches of the upper row of windows were renovated.  Fountains with marble-basins placed on the jambs of the window frames stand out as elements of the architectural style of the era. The hand-drawn gilded ornaments on the fabric coating the wooden ceiling are original.

The window shutters next to the fire place are decorated with nacre intarsia. The windows in coloured glass look out across the high terrace and the garden of the pool below. The spigots in these windows are surrounded with red, black and gold designs. The window frames and marble niches are gilded.  The walls, both internally and externally are covered with examples of the highest quality of the 17th century Iznik tile making in harmony with the style of the period.

The crown prince and other princes were trained in the discipline of the Ottoman Harem until they reached adulthood. Afterwards, they were send as governors to Anatolian provinces, where they were further trained in the administration of state affairs. From the beginning of the 17th century onward, the princes lived in the Harem, which started to have a voice in the palace administration. The Twin Kiosk was used as the privy chamber of the crown prince from the 18th century onward.

These scripts and photographs are registered under © Copyright 2018, respected writers and photographers from the internet. All Rights Reserved.
Posted by ISTANBUL, Extended On Two Continents at 5:54 AM