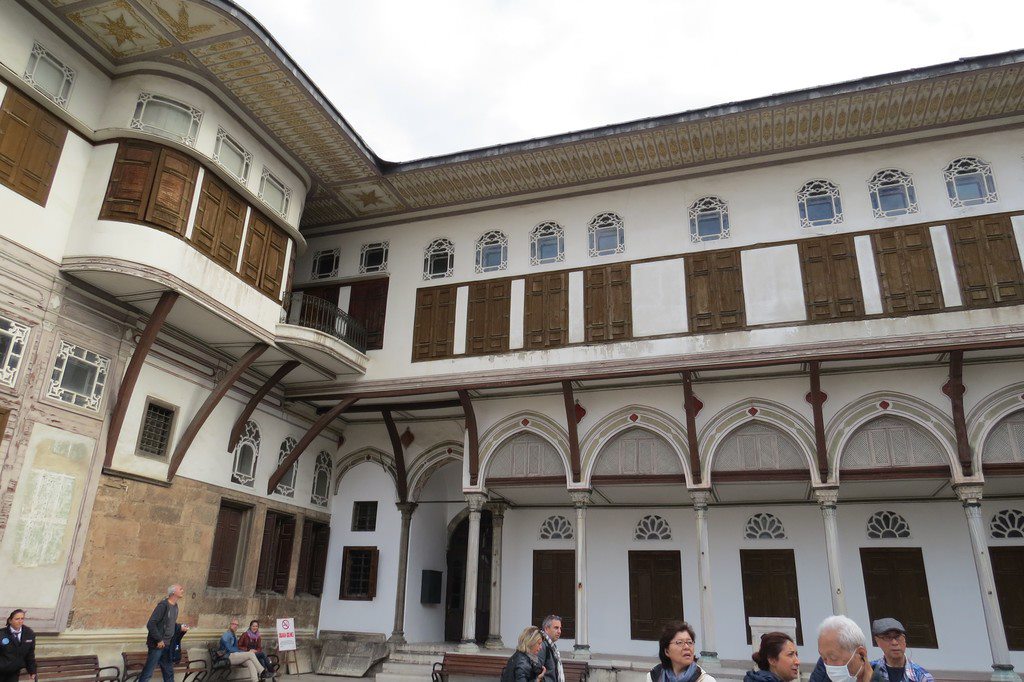 It is located before the section that is between Official wife of Sultan Flat (Sultan Sarayı) of Goldenway that was built during Fatih era (1451-1481) and I. Selim Tower. This section is the closest part of harem to Selamlık, or Private Room in other words, and fourth section that was also called as Imperial Sofa where some pavilions were located, and is directly linked to them.

The difference of Mabeyn Stone Courtyard from other courtyards is that the front is open. Various buildings surrounds it. There is a courtyard, called as Gin’s Consultation Place (Cinlerin Meşveret Yeri), in the direction of Mother Of Sultan Stone courtyard. The highest floor of this courtyard is Prince Flat. In the same direction, there is Double Kasırlar on Stone Courtyard. The courtyard expanded as a high garden.

The sides of this Stone Courtyard had not been filled too much, but were allocated to the controlled lives of princes. This place had also been opened to women after Sultan Abdülhamid I (1774-1789) built Favorites’ Flat (Gözdeler Dairesi) over Goldenway and Sultan Selim I Tower. Sultans had their private apartments built around hamam and Haliç side of Mother Of Sultan Stone courtyard. The connection of this place to Mabeyn Stone courtyard, where they maintained sometimes a public or private life, was provided by a courtyard called as Gin’s Consultation Place. In addition, there used to be places there which were allocated to princes.

The buildings that were made starting from Sultan Mahmut I era (1730-1754) display an integrity in terms of style. They were built in front of Sultan’s Sofa and hamam corridor to enable the use of hamam. The whole pavilion and all rooms were designed as it would not permit women to enter, when Mother Of Sultan’s Flat’s door facing hamam corridor and the door of Sofa with Fireplace are closed.

This domed space in the Harem, where ceremonies and receptions were held, is believed to have been constructed toward the end of the 16th century. Entertainment, weddings and exchange of Bayram felicitations took place in this Hall. The faience inscription on the wall dates from the 18th century revetted with blue and white Delft tiles decorated in the rococo style after the 1665 Harem fire.

The dome, the arches and the pendentives are ornamented with classical patterns traced by brush dating from the beginning of the construction. The Sultan’s Throne and the gallery of the Valide Sultan and Kadinefendis have an imposing aspect. A cellar and the doors of other apartments open on to the Throne Room which is the entrance of the Sultan’s apartments in the Harem.

This Hall which is the largest domed space of the Palace is the most important part of the apartments reserved for the residence of the Sultan, his mother and wives, who had moved into here in the 1580s. This hall, built a few years after the Privy Room of Sultan Murad III in 1579, and whose original character based on the pillared and arched infrastructure, was designed as an open domed hall surmounted by a big dome seated on four suspension arches with a monumental projection at the entrance and façade whose abutment being without windows.

COURTYARD OF THE FAVOURITES

The Courtyard of the Favourites (Gözdeler / Mabeyn Taşlığı ve Dairesi) forms the last section of the Harem and overlooks a large pool and the Boxwood Garden (Şimşirlik Bahçesi). The courtyard was expanded in the 18th century by the addition of the Interval (Mabeyn) and Favourites (İkballer) apartments. The apartment of the Sultan's Favourite Consort along with the Golden Road (Altın Yol) and the Mabeyn section at the ground floor also included the Hall with the Mirrors. The wooden apartment is decorated in the rococo style.

The Interval (Mabeyn) unit was built for the Sultans during the reign of Sultan Osman III (1754-1757). The Mabeyn Courtyard was eventually opened to women with the construction of the Apartments of the Favourites (Gözdeler Dairesi) in mid-18th century. Rooms on the upper floor destined to the use of Chief / Official Consorts (Kadınefendiler) have been built under Sultan Abdülhamit I (1774-1789).

APARTMENT OF THE FAVOURITES

The favourites of the sultan (Gözdeler / İkballer) were conceived as the instruments of the perpetuation of the dynasty in the harem organisation. When the favourites became pregnant they assumed the title and powers of the official consort (Kadınefendi) of the sultan.

The three independent tiled units, equipped with fireplaces, located on the courtyard section facing the Golden Horn were the living spaces of the Sultan’s Chief Consorts. These quarters were erected at the end of the 16th century contemporaneously with the transfer of the whole Harem population into the Topkapı Palace. The porticoes of the three units were merged together in the 17th century so as to form an entrance section.

The apartments are two-storey structures featuring main halls with a double-level height facing the scenery on the one side and the staircase on the opposite side. The upper floors consist of stairheads overlooking the courtyard and mezzanines opening onto the main halls. The main halls equipped with fireplaces are covered with 17th century Ottoman tiles and ornamented with hand-drawn patterns. The apartments are seated on pillared basements, which constitute the multi-storey wards allocated to the concubines providing exclusive service to the members of the dynasty.

The Apartments of the Favourites are to be characterized as an 18th century neo-classical wooden mansion with cloisters, elevated on a platform and featuring lathwork-built halls. The ranges of protruded rooms overlooking the terrace are buttressed through curved supports. The mezzanines with grid windows vis-à-vis the cloister arches are the wards of the concubines.

The Apartments of the Favourites are to be characterized as an 18th century neo-classical wooden mansion with cloisters, elevated on a platform and featuring lathwork-built halls. The ranges of protruded rooms overlooking the terrace are buttressed through curved supports.  The mezzanines with grid windows vis-à-vis the cloister arches are the wards of the concubines.

The Sultan Abdülhamit I apartment situated at the lower level was built onto the partially destroyed Selim I Tower. The tower with its bath and its protective structure which had been historically used by the princes of the dynasty, eventually turned, following the construction of the Apartments of the Favourites,  into a space where Sultan Abdülhamit I lived together with his family.

These scripts and photographs are registered under © Copyright 2018, respected writers and photographers from the internet. All Rights Reserved.
Posted by ISTANBUL, Extended On Two Continents at 6:03 AM