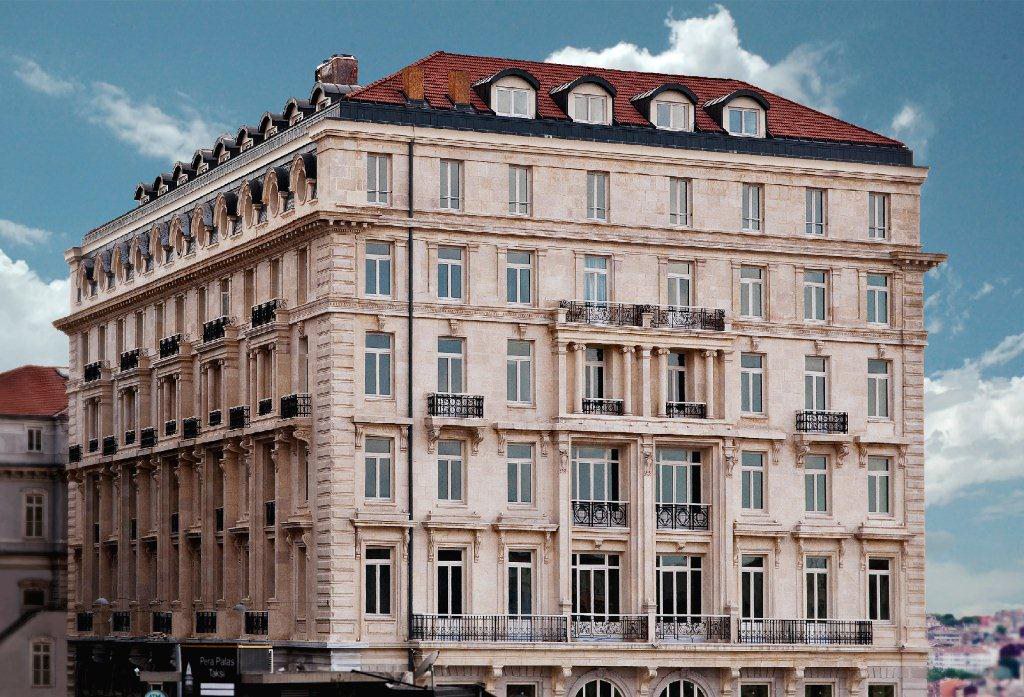 The Pera Palace Hotel Jumeirah (Turkish: Pera Palas Oteli) is a historic special category hotel and museum hotel located in the Beyoğlu (Pera) district in Istanbul, Turkey. It was built in 1892 for the purpose of hosting the passengers of the Orient Express and was named after the place where it is located. It holds the title of "the oldest European hotel of Turkey".

The Pera Palace Hotel, offering magnificent views of the Golden Horn and the skyline of the historic peninsula, is located in the Tepebaşı neighbourhood of Pera, once known as "Little Europe". Today, Pera is the cultural and social centre of Istanbul with its vivid night life and sophisticated museums. In addition to its historic grandeur, Pera Palace Hotel is also attractive due to its central location. It is about 20 km from Atatürk International Airport.

The hotel is in walking distance of Istiklal Avenue, Taksim Square and the British, Swedish, Russian, Dutch, Italian, French and German consulates. The hotel was closed from 2006, undergoing a major renovation and restoration project and reopened on September 1, 2010.

In the late 1800s, a gap in the market for luxury hotels in Istanbul was recognised. Passengers aboard the Orient Express, the preserve of the elite, desired somewhere of equal elegance at which to rest their heads upon reaching the last stop in the East from Paris. With this in mind, the Pera Palace Hotel was born. Establishment work began in 1892 and the grand opening ball was held in 1895.

Alexander Vallaury, a French-Turkish architect living in the city designed the hotel in a blend of neo-classical, art nouveau and oriental styles. Vallaury undertook a number of other projects in Istanbul, including The Ottoman Bank Headquarters and The Istanbul Archaeology Museum.

Pera Palace, the longest established European hotel in Turkey, was the first and only building to be powered by electricity, other than the Ottoman Palaces. It was also the only address in the city to provide hot running water for its guests and was home to the first electric elevator in Istanbul.

Pera Palace Hotel opened as the first luxury hotel in the Ottoman Empire providing the last destination stop in the East for passengers on board The Orient Express. Pera Palace Hotel is today regarded as an important historical building and is listed under the general protection of Turkish Law (No. 2863 of 1983, amended with Law No. 5226 of 2004) concerning cultural heritage in Turkey.

All the interior systems of Pera Palace Hotel are built around a 46 x 28 meter rectangular base, giving an open space in the middle of the building. This space with exceptionally high ceilings is named the Kubbeli Saloon and due to its central location, acts as the heart of the building. A roof which previously enclosed the six domes on top of the Kubbeli Salon has been opened up. The domes have been cleaned and the roof has been converted into glass to let in more sunshine.

The exterior façade, as well as the layout of the property, follows a neo-classical approach. The interiors of the building feature a more oriental style, mostly concentrated in the ballroom interior. In keeping with this eclectic vision, art nouveau lines feature in and around the elevator and in the coffee house section.
Although a prominent symbol of Istanbul’s cityscape, the Pera Palace property was in need of an extensive renovation. Consequently in April 2008, the owner launched a 23 million Euro renovation and restoration project. The entire renovation project is completed on September 1, 2010.

The key objectives of the restoration and renovation project were to ensure that the original architectural and design features of the property were preserved in accordance with Turkish Law, seeking to protect the cultural heritage of the country. Equally important was to enhance the infrastructure and technology of the Pera Palace Hotel, to ensure that it delivered on an experience synonymous with the standards of a five star luxury hotel.

The lobby area has been meticulously restored and retains the original art nouveau, neo-classical and oriental design influences. The first electric elevator in Istanbul remains intact, save for technical enhancements to keep it in working order. The communal areas on entrance floor level including The Orient Bar, The French Patisserie, Patisserie de Pera, the Tea Lounge Kubbeli Saloon, as well as the meeting rooms have all been restored whilst retaining the original architectural space and design detail.

A key attraction, the Atatürk Room 101 remains as a ‘Museum Room’, with many personal items and reading material of the great leader Mustafa Kemal Atatürk exhibited to the public.

In terms of renovation, the priority was to provide the highest level of comfort in the 115 guest bedrooms including upgrading interior fittings and installating new telecommunication systems. The Murano chandeliers to illuminate the bedrooms and heated Italian Carrara marble within the bathrooms. The names of the hotel suites pay homage to celebrated figures of history who stayed at Pera Palace and these key figures, who include Pierre Loti, Ernest Hemingway, King Edward VIII and the Emperor Franz Joseph are referenced through objet d’arts, archive photography, subtle colour schemes and soft furnishings.

Also new to the property is the opening of the new 380 sqm Pera SPA with indoor pool with jet stream, a traditional Hammam, steam bath, jacuzzi, sauna and three treatment rooms. A gym / fitness centre is also be available.

In 1918, Bodossakis Athanassiades, a Greek entrepreneur of Niğde, moved to Constantinople and settled at Pera Palace Hotel. It was during that time that Bodossakis found out that Compagnie Internationale de Wagon Lits, owner of Pera Palace Hotel, wanted to sell it. Fascinated by the allure of the prestigious Hotel and responding to the trend of the time by which Greeks were buying prime real estate in Constantinople, he immediately offered to buy it. He swiftly arranged a meeting with Baron Jean Batiste de Bourge, who was authorized to sell it. It took one and only meeting for Bodossakis to conclude the deal.

The contract was signed on December 21, of 1918 in Paris for the sum of 5.250.000 French francs. Shortly after, he spent 1.500.000 French Francs for the renovation of Pera Palace thus making it one of the most luxurious hotels in Europe and the centre of all social events in Constantinople. In 1922, following the Asia Minor defeat of the Greek army, Bodossakis settled in Athens. One year later, in 1923, the new Turkish State took control of Pera Palace.

After 1923, Misbah Muhayyeş, who gave much to Mustafa Kemal Atatürk during the Syrian campaign, received a letter of gratitude from Atatürk, who, upon Muhayyeş’s wish, honored him with Turkish citizenship and also handed over the management of the hotel. Muhayyeş' will determined that the income of the enterprise be divided between humanitarian foundations.

In 1963, trustees left the management entirely to these organizations after forming the Istanbul Hotel Management, Tourism and Trading Company. Towards the end of 1977, a businessman from Gaziantep, Hasan Süzer, bought 60% of the hotel's shares and became the top executive. Shortly thereafter he purchased the remaining shares.

The destiny of this weary building changed with the lease of its on-ground utilization rights to Beşiktaş Shipping Group in 2006 and a project of restoration, rehabilitation and renovation started immediately. This project consists of a detailed structural documentation and aims at returning Pera Palace Hotel to its magnificent times without damaging its historical foundations and integrity.

Jumeirah Hotels assumed management of the hotel on May 1, 2012 and the hotel has since been known as the Pera Palace Hotel Jumeirah.

Along with politicians, artists and writers, kings, queens and heads of state have also strolled along the halls of Pera Palace Hotel. King Edward VIII, Queen Elizabeth II, Emperor Franz Joseph, as well as Sarah Bernhardt, Alfred Hitchcock, Pierre Loti and Jacqueline Kennedy Onassis have all stayed, to name a few. As testimony to the hotel’s en vogue reputation, the first fashion show in Istanbul was held at the hotel in 1926.

In 1917, Mustafa Kemal Atatürk, the founder of modern-day Turkey, stayed at Pera Palace for the first time. The great leader always chose to stay in Room 101 and on his 100th birthday in 1981 his room was turned into a museum as a tribute to his life. The Atatürk museum room exhibits a spectacular collection of rare Turkish and foreign Atatürk books, magazines, post cards, medals all gathered from auctions by the Pera Palace team.

Ernest Hemingway was also often found whisky in hand, lost in the depth of his thoughts at the Orient Bar of the hotel. Greta Garbo too was a regular – she always cherished the days she spent in Istanbul, daydreaming while watching Istanbul city life from her window.

The world famous thriller writer Agatha Christie allegedly wrote Murder on the Orient Express whilst staying at the hotel. A small key, possibly to her diary, was found in her favourite room, 411.

Pera Palace Hotel Jumeirah overlooks the magnificent view of the Golden Horn and is located in Tepebaşı district of Pera once known as the “Little Europe”. Historically named Pera, today’s dynamic lively Beyoğlu is the historical, cultural and social city centre of Istanbul. In addition to its historic grandeur, Pera Palace Hotel, Jumeirah is also preferred due its central location.The hotel comprises:

With its 115 rooms, including 16 suites, retaining the characteristics of the 19th century elegance through historical furniture, the hotel combines refined elegance with state-of the-art technology to fulfill the needs of 21st century travellers.

Pera Palace Hotel Jumeirah is a “Museum-Hotel” due to its room 101; Atatürk Museum Room that is registered to the Ministry of Culture and Tourism. It is one of the rare examples in the world to have such a special character.

These scripts and photographs are registered under © Copyright 2018, respected writers and photographers from the internet. All Rights Reserved.
Posted by ISTANBUL, Extended On Two Continents at 2:52 PM