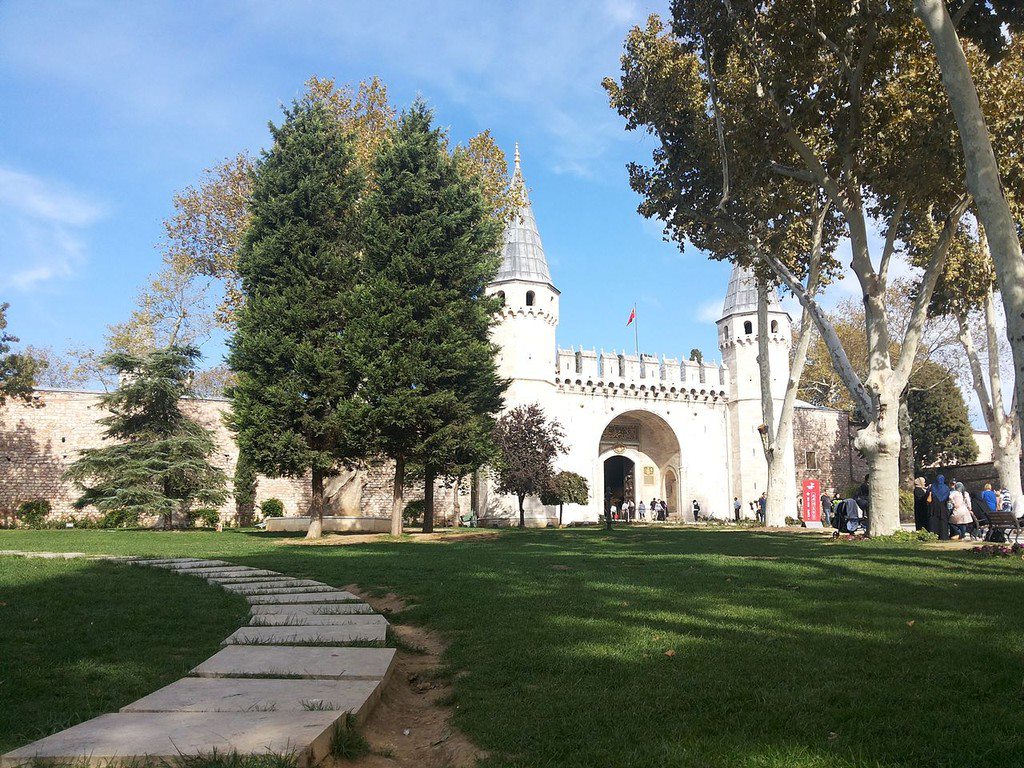 Sultan Mehmed the Conqueror had the middle gate built in 1468. After repairs completed during the Sultan Süleyman the Magnificent reign, the gate’s cut stone portal arch with wide borders and side niches reflect classic Ottoman architectural styles, and its two towers resemble European castle entrances. The iron door was the work of İsa bin Mehmed in 1524.

On the side facing the first courtyard, are seen Kelime-i Tevhid (statement of Islamic faith), Sultan Mahmud II signature, marble plaques with inscriptions regarding reparations dated 1758, and the signature of Sultan Mustafa III. On the side facing the second courtyard, the rococo style arches are dated to the 18th Century, and the landscapes dated to the 19th Century. The wards that were used by the guards on either side of the gate are no longer extant.

No one apart for official purpose and foreign dignitaries were allowed passage through the gate. All visitors had to dismount by the Middle Gate, since only the sultan was allowed to enter the gate on horseback. Today it serves as the visitor entrance to the Museum.

The Gate of Salutation (Bâb-üs Selâm), entrance to the Second courtyard of Topkapı Palace. The large Gate of Salutation, also known as the Middle Gate (Orta Kapı), leads into the palace and the Second Courtyard. This crenelated gate has two large octagonal pointed towers. The date of construction of this gate is not clear, since the architecture of the towers is of Byzantine influence rather than Ottoman. It is speculated that the gate emulates the Cannon Gate, which used to be the royal seaside entrance to the palace gardens from the shore of the Bosphorus.

An inscription at the door dates this gate to at least 1542. In a miniature painting from the Hünername from 1584, a low-roofed structure with three windows above the arch between the towers is clearly visible, probably a guards' hall that has since disappeared. The gate is richly decorated on both sides and in the upper part with religious inscriptions and monograms of sultans.

No one apart for official purpose and foreign dignitaries were allowed passage through the gate. All visitors had to dismount by the Middle Gate, since only the sultan was allowed to enter the gate on horseback.

Directly behind the Gate of Salutation, on the northeast side, the imperial carriages are temporarily exhibited in the former outer stables and harness rooms. This is a relatively low building, altered in 1735 when a new ceiling was installed. Its roof is one of the few undomed roofs to retain its 15th-century shape. Many carriages were destroyed in a fire in the previous stables in the late 19th century.

The carriages on display are some of the sultan's carriages, including the state carriage, the carriage of the Valide Sultan (Queen Mother), and minor court carriages. Some of the carriages were foreign-made vehicles that were imported for the court. Located next to the carriages to the north are the extensive palace kitchens.

The entrance gate from the Second Courtyard is the Gate of Carts (Arabalar Kapısı), which leads into the Domed Cupboard Room (Dolaplı Kubbe). This place was built as a vestibule to the harem in 1587 by Sultan Murad III. The harem treasury worked here. In its cupboards, records of deeds of trust were kept, administered by the Chief Harem Eunuch. This treasury stored money from the pious foundations of the harem and other foundations, and financial records of the sultans and the imperial family.

These scripts and photographs are registered under © Copyright 2017, respected writers and photographers from the internet. All Rights Reserved.
Posted by ISTANBUL, Extended On Two Continents at 7:28 PM