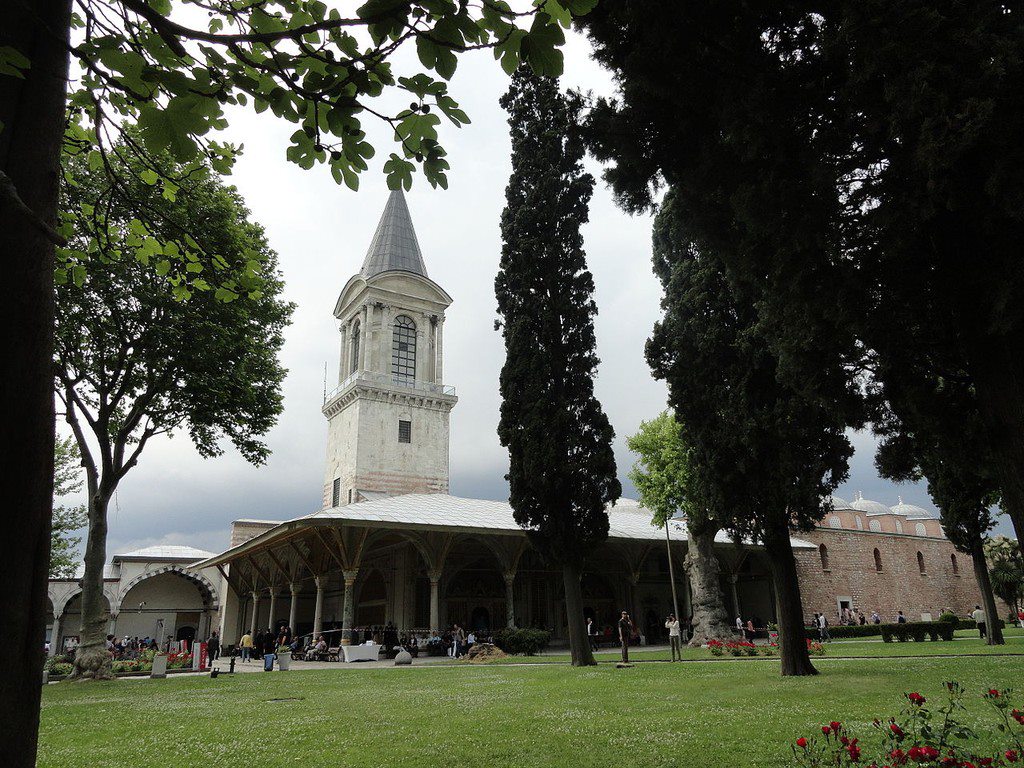 Second Courtyard, with the kitchens to the right. Sultan Selim III holding an audience in front of the Gate of Felicity in the Second Courtyard. Courtiers are assembled in a strict protocol upon passing the Middle Gate, the visitor enters the Second Courtyard (II. Avlu), or Divan Square (Divan Meydanı), which was a park full of peacocks and gazelles, used as a gathering place for courtiers. This courtyard is considered the outer one (Birûn). Only the Sultan was allowed to ride on the black pebbled walks that lead to the Third Courtyard.

The courtyard was completed probably around 1465 during the reign of Sultan Mehmed II, but received its final appearance around 1525-1529 during the reign of Sultan Süleyman I. This courtyard is surrounded by the former palace hospital, bakery, Janissary quarters, stables, the imperial harem and Divan to the north and the kitchens to the south. At the end of the courtyard, the Gate of Felicity marks the entrance to the Third Courtyard. The whole area is unified by a continuous marble colonnade, creating an ensemble.

Numerous artifacts from the Roman and Byzantine periods have been found on the palace site during recent excavations. These include sarcophagi, baptismal fonts, parapet slabs and pillars and capitals. They are on display in the Second Courtyard in front of the imperial kitchens. Located underneath the Second Courtyard is a cistern that dates to Byzantine times. It is normally closed to the public.

Upon passing the Middle Gate, the visitor enters the Second Courtyard (II. Avlu), or Divan Square (Divan Meydanı), which was a park full of peacocks and gazelles, used as a gathering place for courtiers. This courtyard is considered the outer one (Birûn). Only the Sultan was allowed to ride on the black pebbled walks that lead to the Third Courtyard. A strict protocol that governed the functioning and workings of the Second Courtyard was to ensure discipline and respect, as well as lend an air of majesty to the court.

The Second Courtyard was primarily used by the sultan to dispense justice and hold audiences. This was done here also to impress visitors. Various Austrian, Venetian and French ambassadors have left accounts of what such an audience looked like. The French ambassador Philippe du Fresne-Canaye led an embassy in 1573 to the sultan:

At the right hand was seated the Agha of Janissaries, very near the gate, and next to him some of the highest grandees of the court. The Ambassador saluted them with his head and they got up from their seats and bowed to him. And at a given moment all the Janissaries and other soldiers who had been standing upright and without weapons along the wall of that court did the same, in such a way that seeing so many turbans incline together was like observing a fast field of ripe corn moving gently.

We looked with great pleasure and even greater admiration at this frightful number of Janissaries and other soldiers standing all along the walls of this court, with hands joined in front in the manner of monks, in such silence that it seemed we were not looking at men but statues. And they remained immobile in that way more than seven hours, without talking or moving. Certainly it is most impossible to comprehend this discipline and this obedience when one has not seen it.

Imperial Stables are located on the Golden Horn Side of the second yard, between Imperial Treasury and Imperial Council Hall. Imperial Stables of the Topkapi Palace housed the horses that only Sultan and high ranked people of Enderun rode. A vast collection of harnesses is kept in the Imperial Stables.

The structure used for the horses of the Sultan and of the Enderûn aghas (ağalar) is dated to the first period of the palace. The stable sheltering a certain number of selected horses belonging to the Sultan was under the responsibility of the stableman (imrahor).

The space covered with a single dome and the connecting rooms located at the north end of the rectangular-shaped structure served as storage hall for the valuable harnesses and saddles of the Sultan, the “Imperial Harness Treasury” (Raht-ı Hümâyûn Hazinesi). The ornamented ceiling of the domed space was transposed here from the Köçeoğlu Mansion during the 1940 refurbishing. This section housed as well the apartments of the Stables’ Custodian (Ahır Emini), also called the Chief Stableman (Baş imrahor) and other attendants.

From the inscription on its gate, we understand that the building was completely restored in 1736 and the old mosque and baths in the courtyard were re-constructed by Chief Eunuch Beshir Agha (Dârü’s-saâde Ağası Beşir Ağa). The basins in the courtyard date from the periods of Fatih Sultan Mehmet (1451-81) and Sultan Murat III (1574-95). The Imperial Stables connect with the First Courtyard / Ceremony Square through the passage way called the Stable Gate or Gate of Meyyit  (Funeral Gate).

Located on the other side of the courtyard, around five to six meters below ground level, are the imperial stables (Istabl-ı Âmire). The stables include the privy stables (Has Ahır) and were constructed during the reign of Sultan Mehmed II and renovated during the reign of Sultan Süleyman I. A vast collection of harness treasures (Raht Hazinesi) is kept in the privy stables. Also located there is the small 18th-century mosque and bath of Beşir Ağa (Beşir Ağa Camii ve Hamamı), the chief black eunuch of Sultan Mahmud I.

The Ward of the Zülüflu Guards was formed in the 15th Century for the purpose of introduction into military service.  The corps conducted such duties as cleaning the palace Harem and Selamlık, conducting rapid and confidential communications of the sultan, carrying and re-assembling the throne for the accession and religious holiday ceremonies, moving heavy objects and carrying the funeral bier of the sultan and his family members.

The word “zülüflü” (“braided”) stems from the braids hanging down on either side of their conical headgear. Their turned up collars and braids hindered them from observing the surroundings in the Harem while conducting their duties such as carrying in firewood. The Zülüflu Guards Chamberlain was their commander. According to the duties assigned they bore such titles as Chief of the Guard, Keeper of the Council Chamber, Supplier of the Pantry, Captain of the Guards, Officer of Chambers, Producer of Dried Fruits and Nuts, Water Pipeline Builder, and Runner.

The dormitories are constructed around a main courtyard in the traditional layout of an Ottoman house, with baths and a mosque, as well as recreational rooms such as a pipe-room. On the outside and inside of the complex, many pious foundation inscriptions about the various duties and upkeep of the quarters can be found. In contrast to the rest of the palace, the quarters are constructed by wood, which is painted in red and green.

At the end of the imperial stables are the Dormitories of the Halberdiers with Tresses (Zülüflü Baltacılar Koğuşu). These quarters were used by a corps that was responsible for carrying wood to the palace rooms, cleaning and serving service for the harem and the quarters of the male pages, moving furniture and acting as masters of ceremonies.

The halberdiers wore long tresses to signify their higher position. The first mention of this corps is around 1527, when they were established to clear the roads ahead of the army during a campaign. The dormitory was founded in the 15th century. It was enlarged by the chief architect Davud Ağa in 1587, during the reign of Sultan Murad III.

The baltacı or baltadji corps was a class of palace guards in the Ottoman Empire from the 15th to the early 19th centuries. Since the Topkapı Palace was the principal imperial residence, the men of its baltadji company held special status: while the men of the other companies were enrolled, after a period of service, in the Janissary infantry regiments, the men of the Topkapı Palace had the privilege of being enrolled in the sipahi and silahdar cavalry regiments.

The Topkapı baltadjis were commanded by a kahya or kethüda, who was under the authority of the Sultan's principal page, the Silahdar Agha. The company was also responsible for supplying firewood to the Imperial Harem. In order to avoid inadvertently seeing the harem's ladies, the baltacıs were outfitted with special blinkers of cloth or lace and jackets with very high collars, whence they were commonly known as the "blinkered axemen" (zülüflü baltacılar).

In addition, twelve subalterns (kalfas) of the Topkapı Palace company, chosen for their literacy, fulfilled ceremonial duties: they brought the Sultan's throne during his enthronement ceremony and on other festivals, they guarded the sacred standard of the Prophet on campaign while reciting verses from the Quran, guarding the belongings of the harem ladies when the court moved out of the Topkapı during the summer, and, after the 17th century, with presenting the preachers at the Sultan Ahmed Mosque with sharbat, rosewater and incense on the Prophet's Birthday.

Further baltadjis of the Topkapı company were also attached to the chief palace officers, while two kalfas of the company served as the head cook and deputy head cook of the imperial kitchen.

The Tower of Justice (Adalet Kulesi) is located between the Imperial Council and the Harem. The tower is several stories high and the tallest structure in the palace, making it clearly visible from the Bosphorus as a landmark. The tower symbolizes the eternal vigilance of the sultan against injustice. Everyone from afar was supposed to be able to see the tower to feel assured about the sultan's presence.

The tower was originally constructed under Sultan Mehmet II (the Conqueror) (1444-46/1451-81) as a tower kiosk and then renovated and enlarged by Sultan Süleyman the Magnificent between 1527 and 1529. The tower had on its top a wooden pinnacle covered with a conical roof. Sultan Mahmut II elevated the tower further by reconstructing its lantern in 1825 (1820).

Eventually, a belvedere in Empire style was added onto the tower during the reign of Sultan Abdülaziz (1861-76). The stairs of the five-storey tower date from the 19th century. The tower was built as an example of traditional palace towers enabling the sovereign to view the city and the palace, and in particular, to follow the Council meetings from his grilled window. The golden window in the Imperial Council is accessible through the Tower of Justice, thus adding to the importance of the symbolism of justice.

The tower was also used by the sultan for viewing pleasures. The old tower used to have grilled windows, enabling him to see without being seen, adding to the aura of seclusion. The tall windows with engaged columns and the Renaissance pediments evoke the Palladian style.

The mosque and baths were built in 1736 by Hadji Beshir Agha (Hacı Beşir Ağa), the Chief Eunuch of the Palace (Dârü’s-saâde Ağası) during the time Sultan Mahmut I, for the use of the Imperial Stables officials. The structure is elevated off the ground (fevkani) and constructed in neo- classical style.

The walls of the mosque are covered with stone-brick masonry imitation plasters in accordance with the fashion of the 18th century.  It has a single minaret. All wooden parts and the loge were renovated whereas the early baroque style stained glass windows and the marble altar are original. The baths (hamam) which connect to the southern wing of the mosque are double-domed.

These scripts and photographs are registered under © Copyright 2017, respected writers and photographers from the internet. All Rights Reserved.
Posted by ISTANBUL, Extended On Two Continents at 7:41 PM