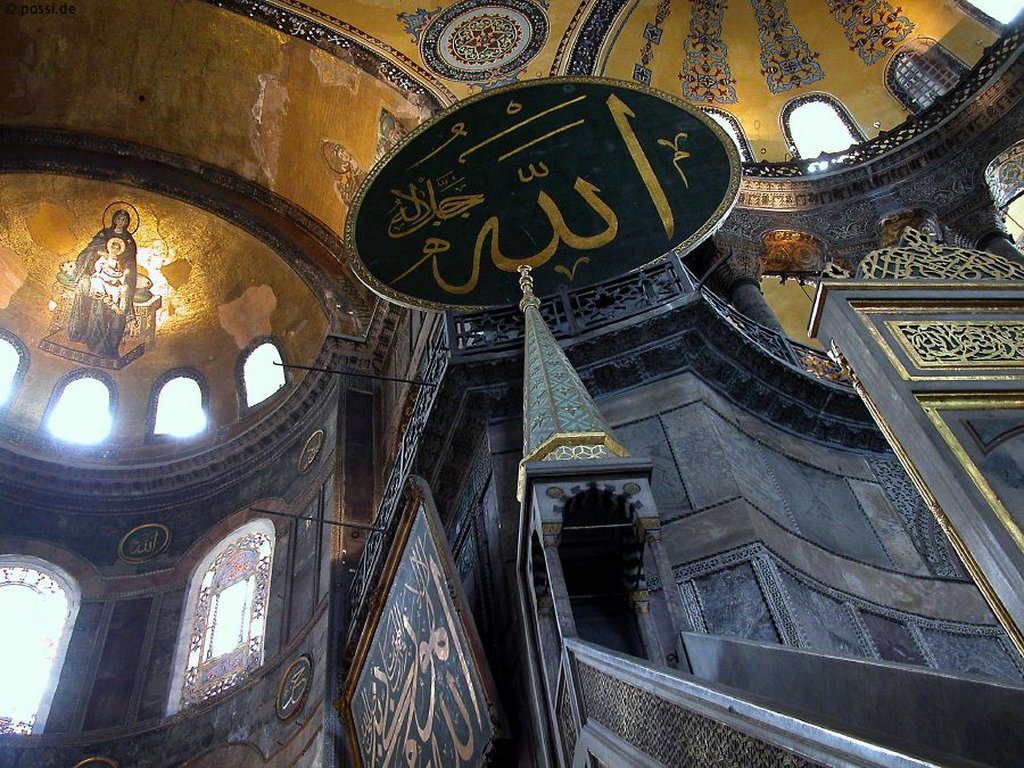 Immediately after the Turks conquered Constantinople (Istanbul) in 1453, the Hagia Sophia was converted to a mosque. At that time, the church was very dilapidated. Several of its doors had fallen off. This condition was described by several Western visitors, such as the Cordoban nobleman Pero Tafur and the Florentine Cristoforo Buondelmonti. The Sultan Mehmed the Conqueror ordered the immediate cleanup of the church and its conversion to a mosque. The next Sultan Beyazid II built a new minaret, replacing the one built by his father.

In the 16th century the Sultan Süleyman the Magnificent (1520-1566) brought back two colossal candles from his conquest of Hungary. They were placed on both sides of the mihrab. During the reign of Sultan Selim II (1566-1577), the building started showing signs of fatigue and was extensively strengthened with the addition of structural supports to its exterior by the great Ottoman architect Sinan, who is also considered one of the world's first earthquake engineers.

In addition to strengthening the historic Byzantine structure, Sinan built the two additional large minarets at the western end of the building, the original sultan's loge, and the mausoleum of Sultan Selim II to the southeast of the building (then a mosque) in 1577. The mausoleums of Sultan Murad III and Sultan Mehmed III were built next to it in the 1600s. Later additions were the sultan's gallery, a minbar decorated with marble, a dais for a sermon and a loggia for a muezzin.

The Sultan Murad III (1574-1595) had two large alabaster Hellenistic urns transported from Pergamon and placed on two sides of the nave. Sultan Mahmud I ordered the restoration of the building in 1739 and added a medrese (a Koranic school, now the library of the museum), a soup kitchen (for distribution to the poor) and a library, and in 1740 a fountain for ritual ablutions (Şadirvan), thus transforming it into a külliye, i.e. a social complex. At the same time a new sultan's gallery and a new mihrab were built inside.

There are many Ottoman additions visible in the nave, many of which were transformed during the Fossati restoration. Among earlier Ottoman work are two 16th century tile panels to the right of the mihrab, which depict the Holy Ka'aba and the other, shows the tomb of the Prophet. A band of blue tiles with Koranic inscriptions, signed 1607, wrap the sanctuary apsis below the window level. The marble minbar also believed to be of this period.

There are four marble platforms abutting the piers; these and the muezzin's platform (müezzin mahfili) were built by Murad III in late 16th century. Sultan Murad IV (1612-1640) added the marble preacher's pulpit (kürsü), located next to the eastern niche.

The most famous restoration of the Hagia Sophia was ordered by Sultan Abdülmecid and completed by eight hundred workers between 1847 and 1849, under the supervision of the Swiss-Italian architect brothers Gaspare and Giuseppe Fossati. The brothers consolidated the dome and vaults, straightened the columns, and revised the decoration of the exterior and the interior of the building. The mosaics in the upper gallery were cleaned. The old chandeliers were replaced by new pendant ones.

Working between 1847-49 under Sultan Abdülmecid II, The Fossati brothers rebuilt the mihrab and the sultan's lodge in the contemporary style and renovated the sultan's kiosk (hünkar köşkü) to the north of the church, which provides access into the lodge from the exterior. Eight colossal disks, bearing the names of God, the Prophet, the four Caliphs and the two sons of Ali, were commissioned to calligrapher Kazasker Izzet Efendi and replaced older panels hanging on the piers.

These works have been kept in place after secularization, while other calligraphic panels were taken to the Sultanahmet Mosque and the Museum of Turkish and Islamic Art. The wrought iron chandeliers and the stained glass windows in the sanctuary are also from the Fossati redecoration.

The Hagia Sophia has four minarets at its corners that were added at different times. The brick minaret at the southern corner is attributed to Mehmed II, and a second stone minaret was added to the north by Mimar Sinan during his restoration. The remaining two minarets are identical and date from the Sultan Murad III period.

One of the minarets (at southwest) was built from red brick while the other three were built from white marble; of which the slender one at northeast was erected by Sultan Bayezid II while the two larger minarets at west were erected by Sultan Selim II and designed by the famous Ottoman architect Sinan. The reason for the varying dimensions and mass of the minarets was to counterweight the main structure's mass and distribute the weight uniformly.

This application by Mimar Sinan was one of the earliest seismic and geotechnical engineering efforts in the world. Latest research shows that without the counterweight of the minarets, the main structure would tend to collapse.

New gigantic circular-framed disks were hung on columns. They were inscribed with the names of Allah, the prophet Mohammed, the first four caliphs Abu Bakr, Omar, Osman and Ali and the two grandchildren of Mohammed : Hassan and Hussain, by the calligrapher Kazasker İzzed Effendi (1801-1877). In 1850 the architect Fossati built a new sultan's gallery in a Neo-Byzantine style connected to the royal pavilion behind the mosque.

Outside the Hagia Sophia, a timekeeper's building and a new medrese were built. The minarets were altered so that they were of equal height. When the restoration was finished, the mosque was re-opened with ceremonial pomp on 13 July 1849.

These scripts and photographs are registered under © Copyright 2017, respected writers and photographers from the internet. All Rights Reserved.
Posted by ISTANBUL, Extended On Two Continents at 1:09 PM