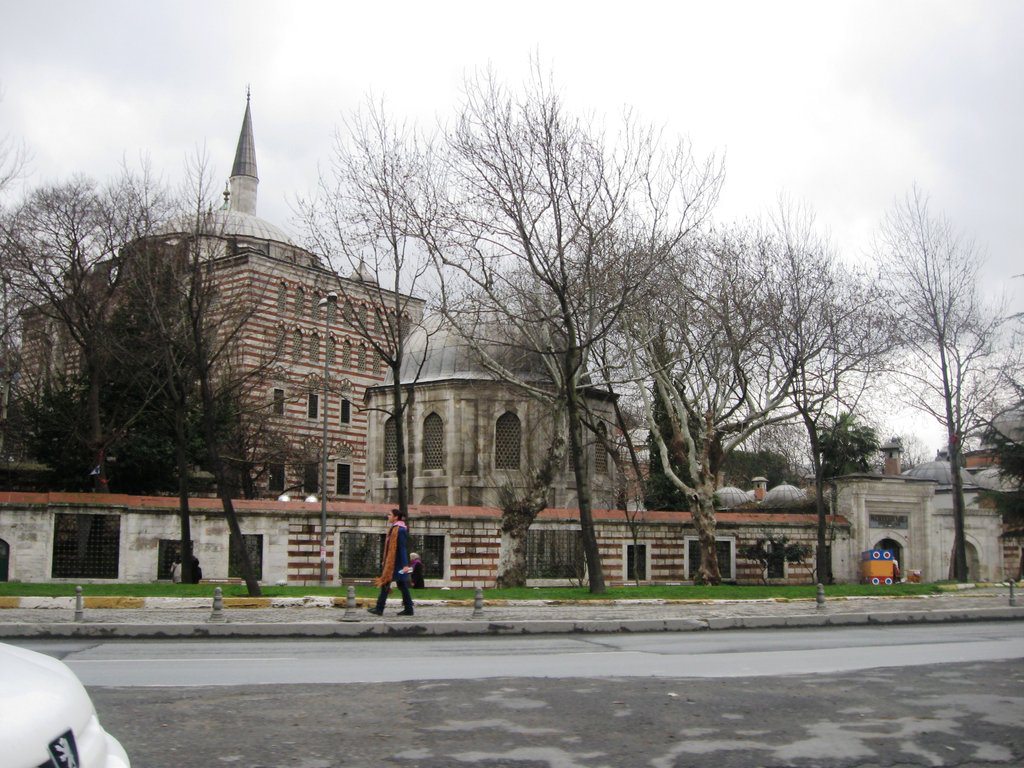 The Zal Mahmud Paşa Complex was built between Zal Paşa Street and Defterdar Street in the Eyüp district. Zal Mahmud, the Vizier of Suleiman the Magnificient and his wife Şah Sultan, a daughter of Sultan Selim II, had it built by Sinan the Architecture (the grand master of Ottoman architecture). The complex is composed of a madrasa, a fountain, and the tombs of  the builders of the complex. Although the construction date is unknown, the complex is estimated to have been built in 1577.

The Zal Mahmud complex was built by the architect Sinan and commissioned by Shah Sultan, daughter of Sultan Selim II (1566-1574), and her husband, the Ottoman vizier Zal Mahmud Pasha (both d. 1580). Due to deteriorated inscriptions and inconsistent documentation, which provide dates ranging from 1551 and 1579, the exact construction date cannot be pinpointed.

Standing on an inclined site in Eyüp between two avenues that run along its east and west sides, the complex can be entered via portals on either side. It consists of the mosque and the tomb on the south side, and the upper and lower madrasas on the north side of the site. The Complex includes a mosque, a tomb, and two madrasas built at two different levels. The mosque and a room of the madrasa, which was later converted into a masjid, are open to the public.

The central area of the mosque, with a dome of 12.40 m, is flanked by side galleries. The porch, with its flat ceiling enclosing the middle of the mosque, is supported by four columns. The decorative niche conforms with the classical Ottoman architectural tradition. The inner decoration of the mosque, which underwent renovation between 1955 and 1963, was renewed in the classical style.

On the side walls are an arrangement of two distichous window rows at close intervals, which is an unseen style in the other works of Sinan the architecture. The walls of the mosque composed of stone and brick. Additionally, the fountain of the complex is made of cut stones set in a rectangular frame.

The design scheme of the complex is unique and unlike any others designed by Sinan. The tall bearing walls, with numerous window openings, evoke a feeling of magnificence even from Sütlüce, across the Golden Horn.

Beneath the mosque on the lower side is a basement floor that supports the mosque with two elephant pillars and rows of smaller pillars. This area opens onto a courtyard ringed by one of the medreses, referred to as the lower medrese. The upper medrese, which is on the same level as the mosque portico, forms a delightful courtyard with a fountain. The medrese itself has 13 cells of varying sizes and shapes, a classroom and a fountain. The lower medrese is L-shaped with 11 cells and a classroom. Both medreses have porticos running in front of them.

In the Zal Mahmut Pasa complex, Sinan shifted from the graded pyramidal structures of his earlier mosques, building a large, pierced rectangular box with a single dome that is twelve and a half meters in diameter. On the exterior, the effect of the dome diminishes next to the height and monolithic character of the exterior walls. The five-bay portico attached to the north of the prayer hall attempts to balance the massing.

The center bay of the portico, distinguished from the other (domed) four by its mirror vault, highlights the portal of the mosque. The portal features a wooden door topped with muqarnas carvings. Entering through the portal to the north of the prayer hall, one sees four small columns carrying the upper gallery, which block the view of the dome.

The unexpected experience of limited vision continues, as the central space is dimly lit in comparison to the side galleries. Further into the prayer hall, the dome above the central space rests on large pendentives over four colossal piers, or "elephant feet". The arches are plainly visible, a departure from Sinan's pyramidal mosques, where the arches are embedded in the supporting semi-domes.

Overall, the mosque is a relatively simple composite structure of brick and stone. As it represents a departure from Sinan's other mosques and his developmental trajectory, it may have been one of his experimental works. Alternatively, it could have been designed by another architect. With the revelation of the arches, the side galleries become independent structures. They hold many windows, some reaching up to the level of their flat roofs, and are better-lit than the central space.

On the qibla wall, the pentagonal mihrab niche features two small columns on its sides and a pencil-work frame. On the exterior, the single-balcony minaret stands at the northwestern corner of the mosque and is entered from the western bay of the portico. On its east elevation, the mosque has a vaulted basement floor that opens to the lower courtyard with rows of arched columns. Two massive piers, exposed on the south elevation, soften its flatness.

The irregularities in the plan continue in the tectonics of the complex; one finds unequal arch lengths, columns that do not match, and unrelated masonry patterns. These mixtures provide no clear statements concerning the architect's intentions or the possible stages of construction and renovation.

The mosque is large but not gigantic. Its dome is a mere 12.5 meters (slightly over 41 feet) in diameter. Unlike earlier, Sinan-designed mosques, it is set on a rectangular box rather than on half domes, and the box which rests on huge “elephant” piers has openings to provide light to the interior.

The exterior portico has five bays with the central one containing the opening to the interior of the mosque. The mosque is entered through a wooden door. The galleries within the mosque also contain windows so the overall effect is one of light and spaciousness. It has only one minaret, made entirely of one piece of stone, with a single balcony for the muezzin.

The complex suffered damage several times, beginning in the seventeenth century. Deserted in 1808, it was restored in 1825 and was preserved until the 1894 earthquake, during which its minaret, along with other parts of the complex, was demolished. Following the replacement of the minaret, the mosque was again abandoned in 1930. The interior ornament was restored during the 1955-1963 renovations. 1964 is the last documented date of a restoration at the complex.

The madrasa, which also departs from a conventional, symmetrical typology in favor of an organic plan development, is located on the north end of the site, forming two adjacent clusters on two levels. Connected to the northeast corner of the mosque by a staircase, the two clusters were developed independently. Therefore, they are usually referred as two separate madrasas, the "upper" and the "lower."

The U-shaped plan of the upper madrasa creates a fountain courtyard within the portico of the mosque. It consists of thirteen cells of different types and sizes, and a larger classroom. The cells on the western wing follow a rectilinear typology along the courtyard side. On the other side, their shape becomes trapezoidal, conforming to the shifting boundary of the site. These cells have mirror vaults; the eastern wing's five sequential cells are all topped with domes.

The classroom is located north of the upper madrasa, and is shifted from the central axis. On its east is a mirror-vaulted rectangular room; three domed cells and a trapezoidal cell are found on its west. A portico runs along the northern and eastern edges; the western wing is left blank, drawing focus to the fountain in the courtyard.

The lower madrasa is L-shaped in plan, with seven identical domed cells on its north, and four typologically different cells and a classroom on its east. All are fronted with a portico. The first of the seven cells attached to the upper madrasa shift to the north, doubling the depth of the portico bay, which results in an elongated mirror vault. The other six bays of the portico have identical domes, whereas the domes on the east vary in size. A fountain is located at the southeastern corner of the madrasa, next to the eastern portal of the complex.

Tomb
The Tomb is at the lower level of the Complex which was designed in two levels on a sloping site. The interior decorations of the Tomb were repaired during the 1960 restoration. It is closed to visitors, but it is possible to view the Tomb through the window openings.

Zal Mahmut and his wife Shah Sultan are buried in the complex’s tomb which is covered by an octagonal dome ceiling with a diameter of 5.10 m.  Devoted to one another with great love, the couple fell ill simultaneously and died within a short interval of time in 1577. Shah Sultan, the daughter of Sultan Selim II, chose to be buried with her husband in this tomb that they had built together instead of the royal Selim II Tomb at Hagia Sophia with her sisters.

Zal Mahmut Paşa Tomb is a fragment of an important Ottoman complex, built by Architect Sinan during the period of Sultan Süleyman the Magnificant. It takes place on the eastern side of the complex. This structure is on the courtyard of the lower madrasa and consists of Zal Mahmut's (vizier during Sultan Süleyman the Magnificant and Sultan Selim II) and Shah Sultan's (daughter of Sultan Selim II) graves.

The tomb is remarkable with its plan which is octagonal on extrior and rectangular inside. Zal Mahmut Paşa Tomb, the interior may take the shape of four cross-shaped iwans, with the exterior not corresponding. The domed central space is flanked by four rectangular spaces surmounted by mirror vaults. There is also antoher grave within the structure, but the owner of the grave is unknown.

The Zal Mahmut Paşa Tomb is today a well preserve structure, taking place on the courtyard of the lower madrasa; however it is closed to visitors; inside is also visible from outside. Actually, the tomb was undergone some restoration progress during 1960's; especially adornments have been restored during this progress.

These scripts and photographs are registered under © Copyright 2018, respected writers and photographers from the internet. All Rights Reserved.
Posted by ISTANBUL, Extended On Two Continents at 12:36 PM