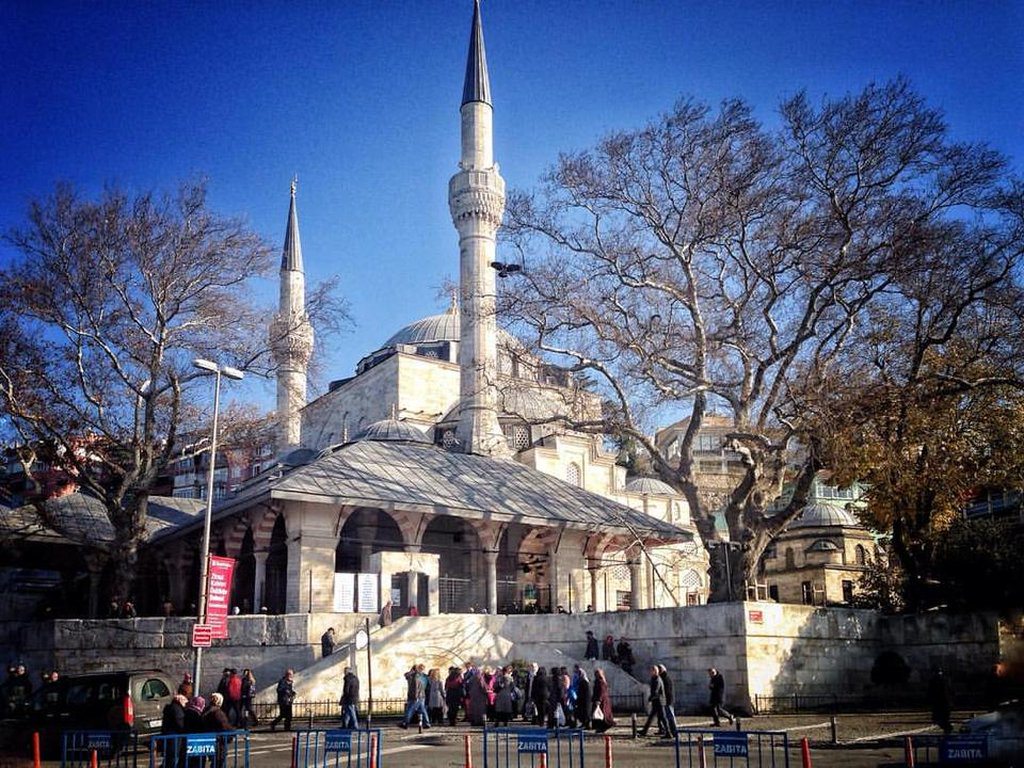 Located in Üsküdar Square across from the quay, the complex was built by Sultan Süleyman, the Magnificient daughter, Mihrimah Sultan, in 1548. The architect was Mimar Sinan. The complex contains a mosque, medresse, tomb, primary school, caravanserai, soup kitchen, hospice and hospital. Only a part of the complex has survived.

It is one of the two complexes in Istanbul which were built on the instructions of Süleyman the Magnificient in 1548 in memory of his daughter Mihrimah Sultan, and has an attribute of carrying the same name in Edirnekapi District. The historical complex was located over against the port side of Uskudar in 1548. In addition, it was built by Sinan the Architect  in the same period with the Şehzade Mosque (Prince Mosque).

It contained a mosque, a school for children, a fountain, a medresse consisting of sixteen rooms, a guesthouse of eight rooms, a stable, a larder, a store house and a caravanserai. It now consists of five sections: mosque, madrasah (theological school attached to a mosque), the tomb of Sinaneddin Yusuf Paşa and the tomb of İbrahim Ethem Paşa.

Originally built by the seaside, the complex includes mosque, madrasa, boys’ school buildings, and the tomb of the Grand Admiral Sinan Pasha. The plan of the mosque is unique to the architecture of Sinan and the design scheme has never been repeated again. Its courtyard is elevated, overlooking the hustle and bustle of Üsküdar Square. One of the main and unique design features here is the way one enters the interior space, underneath the main dome as in the Edirnekapı Mihrimah Sultan Mosque. Since the mosque is at a busy central point in the city, it is open until late every day.

Sinan never designed a second mosque with three domes, leaving the Mihrimah Sultan as the only example of its type. However, this exploration of structural configurations came to influence his later work.

The Mihrimah Sultan Mosque is one of Üsküdar's best-known landmarks and takes its nicknames from the ferry landing near which it stands. It is the first of two mosques built by Mihrimah Sultana, daughter of Sultan Suleiman the Magnificent and wife of Grand Vizier Rüstem Pasha. It was designed by Mimar Sinan and built between 1546 and 1548. It is a massive structure on a raised platform and already shows several hallmarks of Sinan's mature style; a spacious, high-vaulted basement, slender minarets, a single-domed baldacchino flanked by three semi-domes ending in three exedrae and a broad double portico. Mihr-î-Mah means Sun and Moon.

One of the early works of Mimar Sinan, this complex was built on the instructions of Süleyman the Magnificient in 1548 in memory of his daughter Mihrimah Sultan, whose mother was the famous Roxlene. It contained a mosque, a school for children, a fountain, a medresse consisting of sixteen rooms, a guesthouse of eight rooms, a stable, a larder, a store house and a caravanserai.

On a sloping site along Iskele Square in Üskudar, the mosque has a rectangular plan aligned on the northeast-southwest axis. The diameter of the dome of the mosque is 10 m. There are two huge minarets having one balcony (sherefe) each. The decorative niche (mihrab) and the marble pulpit (mimber) reflect the formats of the Classical Ottoman Architecture. It is one of the few premier structures preserving the traces of the past on the Anatolian side of Istanbul. While the structure offers a distinct aesthetic view with a porch that covers the last prayer section, there is a twenty-cornered fountain located on the seaward side of the mosque.

It is entered from a portal on the northwest, the central bay of a five-bay portico. Surmounted by five domes, the open portico is carried by six columns along its northwest side. Running along the northwest side of the mosque is a secondary arcade, which is as deep as the portico and is carried over pointed arches resting on relatively slim columns. This arcade extends northwest to cover the circular fountain, which is on axis with the portal of the mosque. Made of marble, the portal carries an inscription with the construction date of 1547 that names Mihrimah Sultan and Süleyman the Magnificent as its patrons.

Architect Sinan opted for a design of the mosque more modern than that of Ayasofya Mosque. The half dome which is usually present above the entryway is absent; immediately upon entering the mosque one is under the main dome. The "Şadırvan", or ablution fountain, is one of the finest of all the mosques in İstanbul . The repousse ornamentation found on the window shutters, pulpits, and the marble mosque niche (mihrap) are products of expert workmanship.

The Mihrimah Sultan is one of Sinan's early mosques, where he made a structural experiment, choosing to flank the main dome on three sides with three half-domes. This was the first time Sinan used half-domes, with the end result that the spatial organization and the structural system of the mosque are not perfectly resolved. The asymmetry in the structure entailed both a heavy structure and an unusual configuration on the southeast elevation, which ended abruptly.

The portico was not adequate to overcome the effect of the southeast elevation, so another large arcade was added, which extended to cover the fountain. Another side effect of the asymmetrical design was the immediate entry into the prayer hall, which impaired the sense of spatial depth. However, this quick entry also created the opportunity for the visitor to experience all of the interior space simultaneously.

Above the prayer hall, the main dome has sixteen windows; the main dome and the three half-domes are supported with twin buttresses that appear on four sides of the exterior. The south and east corner bays of the prayer hall are surmounted with two smaller domes. The muezzin's platform (muezzin mahfili), which is carried over five piers, is articulated as a small square projection southwest of the entrance. The minbar is placed just across the muezzin's platform on the qibla wall, southwest of the mihrab. The mihrab itself is a marble niche with muqarnas carvings above.

The interior space is adorned with painted ornamentation, and the upper windows, as well as the windows in the domes, are filled with stained glass. The mosque has two minarets on the north and west corners of the prayer hall, both with single balconies. They are entered from the first and fifth bays of the portico. Their balconies have balustrades with stonework carried over four rows of stalactite carvings.

On the righthand wall of the mosque, next to the entrance to the graveyard, there is a sun dial, built by the Dervish Gaybî Muhyiddin, the timekeeper of the Yeni Camii. This was built in 1769 and was called the "Basita". The clock is one of the best examples of sun dials in İstanbul.

One of the early works of Mimar Sinan, this complex was built on the instructions of Süleyman the Magnificient in 1548 in memory of his daughter Mihrimah Sultan, whose mother was the famous Roxlene. It contained a mosque, a school for children, a fountain, a medresse consisting of sixteen rooms, a guesthouse of eight rooms, a stable, a larder, a store house and a caravanserai.

The other sections of the mosque could not be reached until today. The Madrasah (religious school) is composed of 16 rooms that is being used as a health clinic today, the tomb of the two sons of Mihrimah Sultan, the tomb of the Osman Ağa, son of Rüstem Pasa-Grand (Grand Viziers of the Ottoman Empire), and the tomb of Sinan Paşa, Admirals of the Navy  (Kaptan-ı Derya) are the structures that have stood until today.

Unfortunately, the soup kitchen and the caravanserai of this complex have not survived. At the time of "Sürre Alayı", an event which was organized during Ottoman times to send candidates for the pilgrimage to Mekka and Medina every year, many of the candidates stayed in the Mihrimah Sultan caravanserai.

The other building in the complex is a Quranic primary school (Sıbyan Mektebi), which consisted of a domed porch and classroom. The tabhane (hostel) disappeared during the fire in 1772 and the inn and kitchen have also been completely cleared away.

Today, the medresse is used as a health center and the school for the children is now a childrens library. There is a fountain located next to the wall closest to the Bosphorus and another one under the school. The Square Baths (the Grand Baths) was removed at the end of the 80's. The building that has replaced it no longer resembles the original form, and is now used as a super market.

The medresse is found to the north of the mosque. The interior of the medresse no longer resembles its original form and is used as a health center today. The tombs of Mihrimah Sultan's two sons and Prime Minister İbrahim Ethem Paşa can be seen between the mosque and the medresse. The primary school is found on the kiblah (direction facing Mecca) side of the mosque. The hospice, soup kitchen and caravanserai have not survived.

On the righthand wall of the mosque, next to the entrance to the graveyard, there is a sun dial, built by the Dervish Gaybî Muhyiddin, the timekeeper of the Yeni Camii. This was built in 1769 and was called the "Basita". The clock is one of the best examples of sun dials in İstanbul.

These scripts and photographs are registered under © Copyright 2018, respected writers and photographers from the internet. All Rights Reserved.
Posted by ISTANBUL, Extended On Two Continents at 12:45 AM