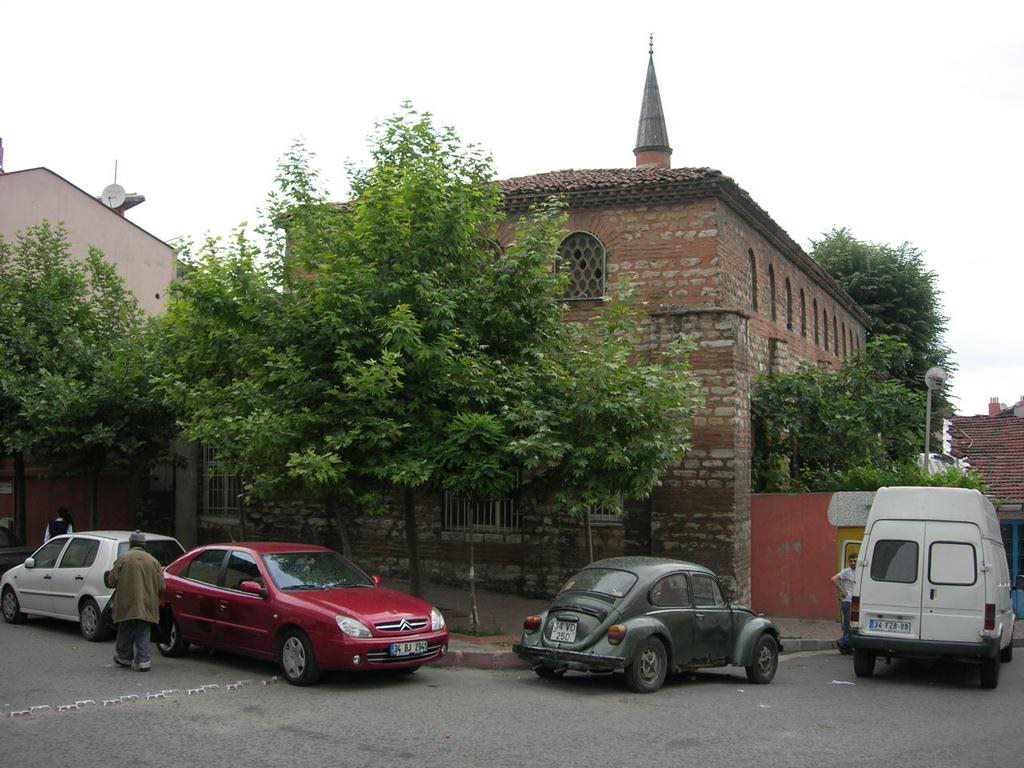 The building lies in Istanbul, in the district of Fatih, in the neighborhood of Salmatomruk, on Kasap Sokak. The Kefeli Mosque is a former Eastern Orthodox church, later jointly officiated by Roman Catholics and Armenians, and finally converted into a mosque by the Ottomans.

The origin of this building, which lies on the slope of the sixth hill of Constantinople, is not certain. The tradition says that in the ninth century Manuel, a general in the wars against the Saracens during the reign of Emperor Theophilos (r. 829-842), built a monastery converting his house, which lay near the cistern of Aspar. Manuel was the uncle of Empress Theodora, wife of Theophilos, and before retiring to his monastery he was one of the three counselors who assisted her in the regency for her infant son Michael III, following the death of her husband.

Greek and Jewish inhabitants who lived in Caffa ("Caffariotes" or, in Turkish, Kefeli) were then deported to Istanbul and relocated to this quarter. The Latins, mainly Genoese, were authorized to use this building as a church together with the Armenians. The church, dedicated to Saint Nicholas, was officiated by the Dominicans, and kept by four Catholic families. Armenians and Catholics had separated altars. This small church depended on the near Catholic Church of Saint Mary, which later became the Odalar Mosque.

The origin of this building, which lies on the slope of the sixth hill of Constantinople, is not certain. The tradition says that in the ninth century Manuel, Drungarius in the wars against the Saracens during the reign of Emperor Teophilos, built a monastery converting his house, which lied near the cistern of Aspar. He was the uncle of Empress Theodora, wife of the Theofilos, and before retiring in his monastery he was one of the three counselors which assisted the Empress after the death of her husband and the minority of Michael III.

The monastery was rebuilt by Patriarch Photius, and was restored again by Usurper Romanos I Lekapenos. Emperor Michael VII retired here after his deposition. All these events shows the importance of this monastery in Constantinople. Anyway, the attribution of this building to the complex founded by Manuel is far from certain, and has been denied by the newest research.

The documented history of the edifice begins in 1475, shortly after the Fall of Constantinople, when the ottomans conquered the genoese colony of Caffa, in Crimea. All the Latin, Greek and Jewish inhabitants who lived in Caffa ("Caffariotes" or, in Turkish, kefeli) were then deported to Istanbul and relocated to this quarter. The Latins, mainly Genoese, were authorized to use this building as a church together with the Armenians. The church was dedicated to Saint Nicholas and officiated by the Dominicans.

In 1630, under the reign of Sultan Murad IV (1623-1640), the church was converted into a mescit (a small mosque) by Great Vizier Receb Pasha, but retained the denomination, being first known as Kefe Mahalle, then as Kefeli Mescidi. In exchange, the Armenians got a Greek church in Balat.

The building is a large hall, 22.6 meter long by 7.22 wide, and is oriented in North-South direction, which is quite uncommon among the Byzantine churches in Constantinople. Its masonry consists of alternate courses of bricks and stones. The original building had a triple-nave plan, but the only remains of the side aisles belong to the end wall of the western one. To the north side there is an arch and a semicircular apse made of bricks, which outside has a polygonal shape. The walls of the apse are indented by two niches.

The dating of the edifice is uncertain. The polygonal apse and the niches in the apse are typical of the churches of Palaiologan foundation. The building is architecturally interesting because it is an example of reproposition of the early Christian Basilica form during the later Byzantine period.

Kefeli Mosque is a large oblong hall, m. 22.6 long by m 7.22 wide, with walls constructed in alternate courses of four bricks and four stones, and covered with a lofty timber roof. It terminates to the north in an arch and a semicircular apse in brick. Two niches, with a window between them, indent the walls of the apse, and there is a niche in each pier of the arch. The building is entered by a door situated in the middle of the western wall.

Originally the eastern and western walls, which form the long sides of the building, were lighted by two ranges of round-headed windows, somewhat irregularly spaced. The upper range is situated a little below the ceiling, and forms a sort of clearstory of ten lights; the lower range has five windows, except in the western wall, where the place of  one window is occupied by the entrance.

The southern wall is also lighted by two ranges of windows, the lower windows being much larger than the higher. At some time buttresses were built against the eastern wall. Under the west side is a cistern, the roof of which rests on three columns. In view of all these features it is impossible to believe that the building was a church. Its orientation, the absence of lateral apses in a structure of such dimensions, the position of the entrance, are all incompatible with that character.

We have here, undoubtedly, the refectory and not the sanctuary of the monastic establishment. It resembles the refectory of the Laura on Mt. Athos, and that of Daphni near Athens. It recalls the 'long and lofty building,' adorned with pictures of saints, which formed the refectory of the Peribleptos at Psamathia. There is a tradition that the use of the building was granted at the conquest to the Armenian colony which was brought from Kaffa in 1475 to repeople the capital, Hence the Turkish name of the building.

These scripts and photographs are registered under © Copyright 2018, respected writers and photographers from the internet. All Rights Reserved.
Posted by ISTANBUL, Extended On Two Continents at 6:39 AM