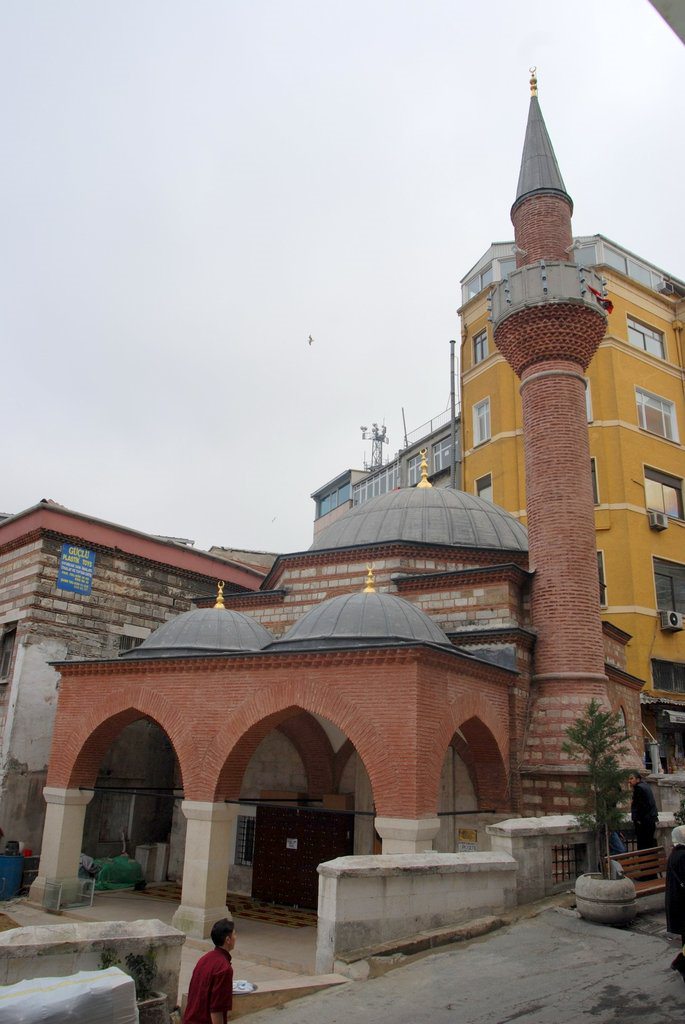 Yavaşça Şahin Mehmet Ali Paşa mosque is on the intersection of Fuat Paşa Avenue and Mercan Avenue, across the southeastern gate of the Central Building of Istanbul University. Yavaşça Şahin was a captain in the fleet of Sultan Mehmet II at the time of the Conquest.

The structure is also known as Aga Mosque and Yakup Aga Mosque. After burning down of the mosque  built in 1547 with the order of Palace Aga Yakup Aga before his death for the funeral prayers of the Palace residents, the Aga mosque was constructed in 1869 with the order of one of the most prominent viziers of Sultan Abdulaziz period, Ali Pasha (1915-1871).

The architect of the structure is Italian architect Boriori. On the epigraph in a oval madallion is placed the monogram of Sultan Abdülaziz. The structure had been heavily damaged at the Mercan Fire in 1912 and was left ruined for 37 years. The Mosque was restored to reflect the period of Ali Pasha by Foundations General Directorate betweeen 1949-1953 and opened to service.

This eclectic-styled building is quite  striking with the shops at tis bottom, the public fountain at its corner and  its octagonal mass. The scheme which is octagonal externally is  being rounded inside and covered with a dome.

It is one of a small group of early mosques that form a distinct type, in which the front porch has only two domes, and the entrance portal is consequently shifted off centre under the south dome. Within, a square chamber with a blind dome resting on an octagonal drum is supported by a series of triangles, making a 16-sided base.

The mosque is being illuminated with windows  overseeing the avenues. Three of these Windows that overlook the center are very high and decorated with round arches. On the arches at the stirrup points there are overhangs which maket hem look as horseshoes.  On top of these wisnows there are round top-windows  decorated with plaster stained glass from inside and the seal of Solomon from outside.

Despite the rather plain decoration inside, the mosque has a very vibrant outer look. The eaves of the mosque is has no classical proportions. On top of the eaves there are sliced arch-looking facades decorated with stylized plant motives inside and covering the structure as coronas. The both sides of the round Windows are being decorated with hexagonal stones and the spaces at the joint points of the hexagons are filled with red and green stones.

A belt of cantilevers is marking the space between the first floor where the mosque is and the ground flor where the public fountain and the shops are. There are round Windows on the ground floor whose original use is not discovered but is used for prayers today.

These scripts and photographs are registered under © Copyright 2018, respected writers and photographers from the internet. All Rights Reserved.
Posted by ISTANBUL, Extended On Two Continents at 9:14 AM