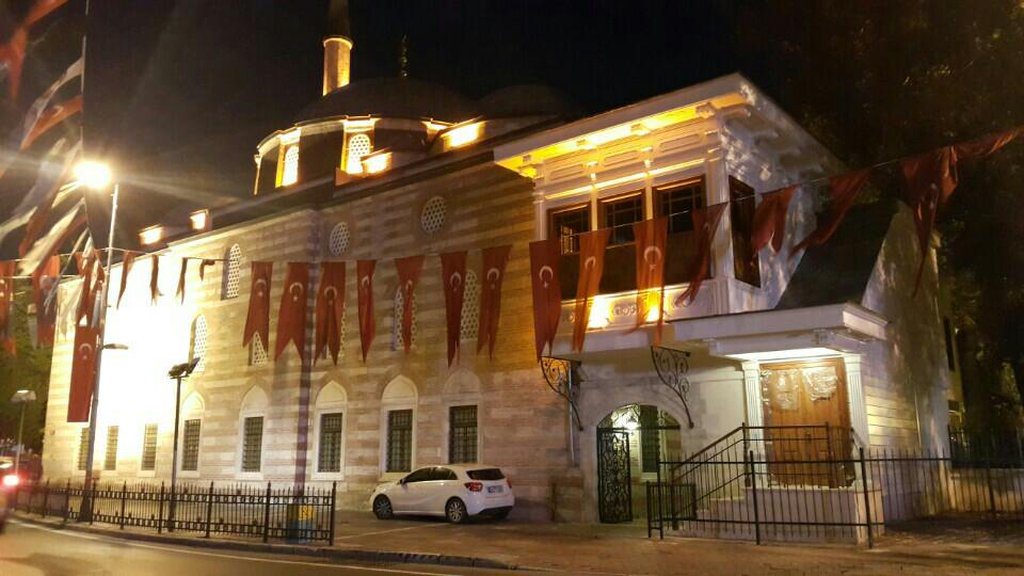 The Sinan Pasha Mosque is an Ottoman mosque located in a densely populated district of Beşiktaş, in Istanbul, Turkey. It was built by famous Ottoman architect Mimar Sinan from the order of the admiral Sinan Pasha. The türbe (tomb) of Barbaros Hayrettin Pasha is located just across the street. Mosques of Mimar Sinan has been "said to have changed the history of architecture."

Built by the Grand Admiral Sinan Pasha, this mosque has been quite influential in making this neighborhood significant for all mariners. In time, the tradition of visiting the Tomb of Barbaros Hayrettin Pasha before the Ottoman Armada sailed on naval expeditions came to include a Friday prayer at the Sinan Pasha Mosque as well.

The plan scheme of the Sinan Pasha Mosque, built by Sinan the Architect for the Admiral Sinan Pasha between 1555 and 1556. Detailed renovation works were done in the years 1936, 1937, 1972 and 1974. The calligraphy embellishment decorating the 12.6 m in diameter main dome and the interior space of the mosque, was renewed in the 19th century.

The courtyard is surrounded by madrasah rooms instead of porticos and this is a fine example of a more traditional style. The madrasah with twelve rooms still had students in 1912. The construction quality of the fountain and the mosque were related to the death of Sinan Pasha during the construction. The double 600 m2 bath of the mosque was removed during the city planning works in 1957.

Marble fountain in the courtyard is original. There is small courtyard behind the madrasah rooms where the toilets are located. Death of Sinan Pasha before finishing the construction of Sinan Pasha has caused the construction to be much simpler when compared with other buildings of the age. Its restoration has been executed between the years 1999-2004 by General Directorate of Foundations, Istanbul Area Management of Foundations.

From sources it is understood that madrasa was opened to education in 1557, had 31 students in 1869 and was shelved in 1914. Madrasa alcoves in the courtyard of Sinan Pasha Mosque were not able to keep its originality up. Twelve madrasa alcoves which are supposed that it is square planned, consists of domed rooms and which comes into existence with pavement of brick in alternative system are roofed today. It is not known when this roof was sited there and it is supposed that it was constructed by General Directorate of Foundations in 1930s. Only marble water-tank in its courtyard was able to reach today with its original form. There is a small courtyard including toilets behind madrasa rooms.

As with the structures he designed for other Grand Admirals, Sinan used a traditional plan type here. In a way, as can be observed by those who have seen that building. Upon the death of Sinan Pasha, his brother, the Grand Vizier Rüstem Pasha, completed the mosque. The original complex included a madrasa and double baths, in addition to the mosque.

The window arrangement lighting the Mosque is also same as that of the mosque, Üç Şerefeli Cami (the mosque with minaret having three balconies). Part of the minaret above the prayer balcony was ruined during the 1999 Marmara earthquake and rebuilt afterwards. The madrasa surrounds the courtyard of the mosque. The repairwork during 1970-1972 has somewhat altered the original form of the building, with the wooden cover over the portico.

These scripts and photographs are registered under © Copyright 2018, respected writers and photographers from the internet. All Rights Reserved.
Posted by ISTANBUL, Extended On Two Continents at 4:18 AM