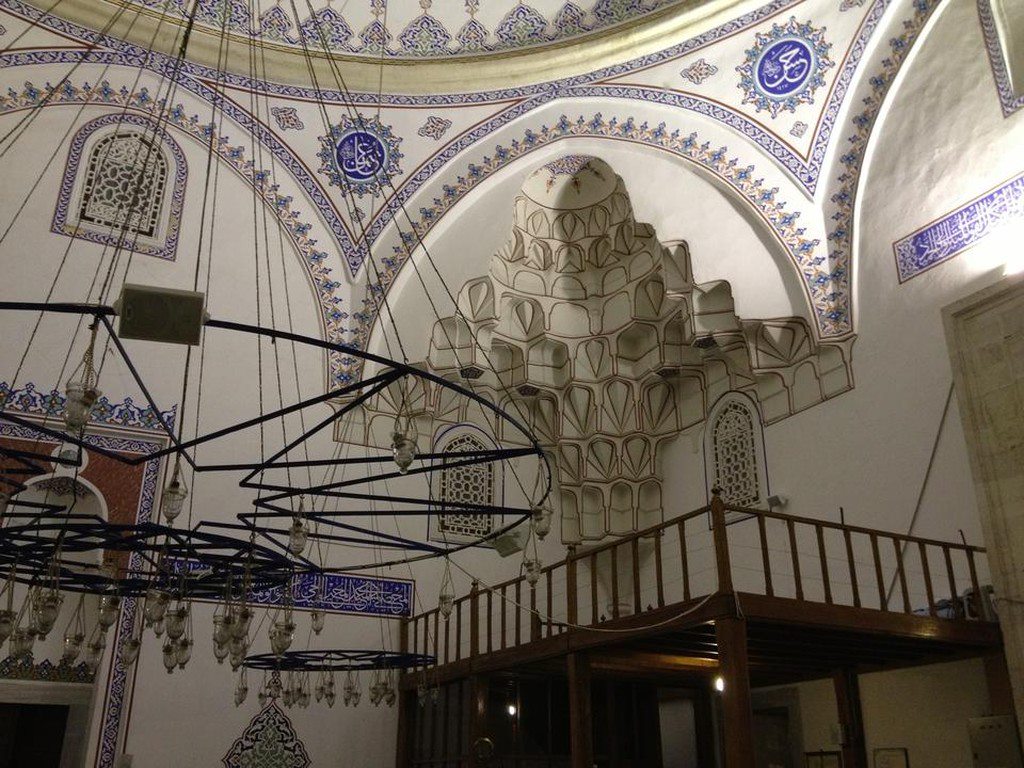 The complex was built by Dervis Davud Pasha (d. 1498) - who was the governor-general (beylerbeyi) of the Anatolian provinces under Sultan Mehmed II (1451-1481) and then the grand-vizier of Sultan Bayezid II (1481-1512), and finally he became a devotional hermit (dervis). Davud Pasha had a large endowment (waqf) including commercial properties in the Turkish cities of Istanbul, Edirne, Bursa, Yenişehir, and Beypazarı; Skopje, Bitola (Manastir) in Macedonia; Varna in Bulgaria; Aetos (Aydos) in Greece. These properties provided income for the management and maintenance of his complex in Istanbul among other public works.

Located in the residential quarter named after Davud Pasha, the complex consists of a mosque, madrasa (medrese) and soup kitchen (imaret). The mosque is composed of a five bay domed porch preceding a large prayer hall under a single dome, flanked by two convent rooms on either side. The mosque is oriented 38 degrees east of south. The main portal, marked by a rise of the portico cornice, is set into the portico façade and crowned by a semi umbrella vault. The foundation plaque above the entry is composed in Arabic and gives the completion date of 1485-86 (890 A.H.).

According to the inscription of Davut Pasha Mosque (situated a bit far from Haseki Mosque), was built by Grand Vizier Davut Pasha in 1485. It is an example of the transition to the single domed mosques of the Bursa type.The mosque was restored by the architects Abdullah and Ismail after the earthquake of 1766. The destruction caused by the fire was repaired in 1782. The restoration of the domes and some walls, which were ruined during the earthquake of 1894, were hardly completed in 1945.

The calligraph in the mosque is the creation of Calligrapher Sheikh Hamdullah. The central dome, with a diameter in 18 meters, seems the part of body of the mosque. Measuring 18.2 x 18.1 meters in to in, the mosque has two small rooms.

Entering the prayer hall, the space of the interior is dominated by the large dome and its colossal squinches, adorned with stalactites that cascade down the four corners of the main space. The qibla wall projects beyond the flanking spaces on the exterior and is further distinguished with a polygonal mihrab apse that is capped with a semi-dome below the cornice line. The four convent rooms, each covered with a dome, have doors into the prayer hall. The southern rooms, equipped with fireplaces and shelves, can also be entered via the semi-enclosed northern rooms, which open to the exterior with arched entryways.

The windowpanes and doors of the mosque are contemporary, while the minber is known to date from the rule of Mahmud II. Painted decoration of the period, consisting of arabesques, depictions of trees and Koranic inscriptions, were discovered on walls during the 1945-48 renovation, recorded and plastered over. The mosque has a single minaret with a rectangular base on the western corner; its shaft was rebuilt after the 1766 earthquake.

The Davud Pasha complex was damaged by earthquakes in 1648 and 1766 and burnt in the 1782, shortly after its restoration by royal architects. The portico collapsed in the 1894 earthquake. A major renovation by Ekrem Hakkı Ayverdi between 1945-48 restored the missing columns to the portico and rebuilt its domes and the mihrab apse.

The walls were also reinforced at this time, by refilling gaps in the wall structure that were caused by rotting, disintegrating wooden planks. A later renovation was performed by the General Directorate of Religious Endowments (Vakiflar Genel Müdürlügü) in the 1960s. Most recently, a new ablution fountain was built on the foundation of the original.

The Madrasa
The madrasa is located to the northeast, across the street from the mosque. It is composed of sixteen rooms and a domed arcade enclosing three sides of a square courtyard, and a wall with windows on the fourth, where the entrance is located. The foundation plaque above the entry is composed in Arabic and gives the date of completion, 1499-1500 (905 A.H.) .

There is a large domed classroom with mihrab located at the center of the northern wing, across the courtyard from the entrance. The individual rooms all have a fireplace and shelves. The arcade, which has partially collapsed due to earthquakes, has columns and capitals recycled from Byzantine monuments. The madrasa remains in dilapidated state, with homes and retail attached to its exterior walls.

The madrasah has 16 rooms and 1 classroom. The Byzantine columns and capitals of the porticos were reused here. People, who lost their houses during the fire of 1918, were located to the madrasah, which was restored after the earthquake of 1648. The dome of the madrasah fell down in 1931.

Fountain
The plain fountain, built after Davut Pasha died, with an inscription on it is the oldest Ottoman fountain. A fountain outside the precinct wall, dating back to 1485, is the oldest in the city with a foundation plaque.

The Mausoleum
Davut Pasha who died in 1498 is buried within the tomb behind the mosque, octagonally planned, measuring in to in, 7.36 meters in diameter. The name Dervish Mahmut is written on the tomb’s arch. The mausoleum, located to the left of the mosque, is composed of a single octagonal room with an entry porch to the northeast. The foundation plaque, framed by a Bursa arch above the entrance, gives the date of completion 1499-1500 (A.H. 905).

The door is of the period. Inside, the marble sarcophagus of Davud Paşa occupies the center, with his steward (kethüda) buried to his side. The interior is lit by two windows on each façade, the lower framed by a varied Bursa arch and the upper honeycomb carved windows.

Koranic School, Soup Kitchen
The Koranic School (mekteb) was taken down following damage in earthquakes. Its site behind the mosque is now occupied by a Middle School. The soup kitchen, similarly, is non-extant.

These scripts and photographs are registered under © Copyright 2018, respected writers and photographers from the internet. All Rights Reserved.
Posted by ISTANBUL, Extended On Two Continents at 4:11 AM