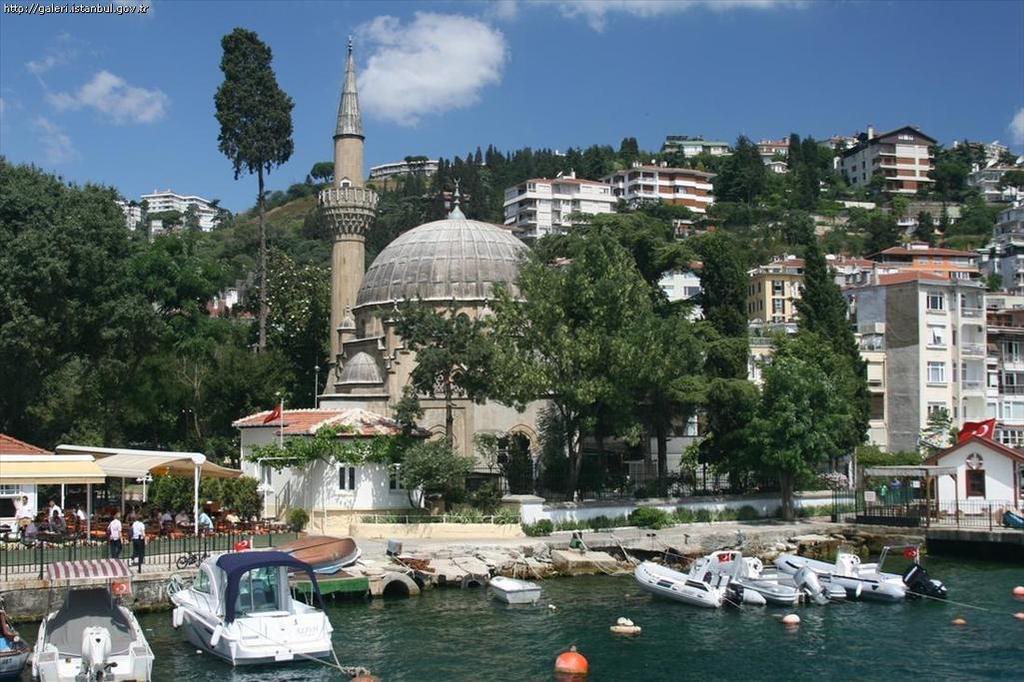 The Bebek Mosque was built in 1913 by the Ministry of Waqfs to replace an older mosque that was built by Nevşehirli Damat Ibrahim Paşa, the grandvizier of Sultan Ahmed III. Completed in 1725-26, the old mosque stood adjoining the coastal palace of Hümayunabad and had a royal lodge for the Sultan. The palace was torn down in 1846, and the current mosque stands next to a public park, and a small ferry station, that occupy the palatial site today.

Bebek Mosque, whose original name was Hümayun-u Abad. The mosque which was neglected following years was rebuilt using Hereke stone under the supervision of the Architect Kemaleddin Bey circa 1912. The calligraphy masters of the mosque were Ismail Hakkı Bey and Mecit Bey. Square planned, single-domed, the mosque was lighted by sixteen windows.

The Bebek Mosque is located on the banks of the Bosphorus in the historic Bebek quarter. Formerly a Byzantine village, the quarter gets its Turkish name from Bebek Çelebi, the head of the infantry regiment that was stationed there in the months leading up to the conquest of Constantinople in 1453. A preferred location for the construction of royal kiosks and gardens in the 16th century,

Bebek was filled with coastal palaces and summer mansions of the aristocracy in the 18th century. The institution of ferry service between the historic core and Bebek in mid 19th century transformed from a seasonal residence into a permanent community of well-to-do Istanbul residents.

Unlike the old mosque, which was built on the second floor of a primary school, the new mosque consists only of a prayer hall. Designed by Architect Kemalettin Bey, who was then the head architect at the Ministry, the mosque is an example of the First Nationalist Period in Turkish Architecture, spearheaded by Kemaleddin and Vedat (Tek) Beys.

The style, formulated by the First Turkish graduates of the School of Fine Arts in Istanbul in the early 20th century, draws upon the formal and decorative vocabulary of early Ottoman works in Bursa, which were analyzed in detail for the publication of a pioneering volume on Ottoman Architecture to be presented in the Vienna Exposition of 1873.

The mosque is built entirely of cut stone and consists of a domed prayer hall and a three-bay portico to the northwest. An inscriptive plaque in gold letters crowns the portico entrance. Upon entering, side bays of the portico have raised floors outlined with marble balustrades. A set of stairs on the left side lead up to a wooden balcony used only by women.

The portico was encased in 1991 to allow for use during winter. Inside, the prayer hall is square in plan and is covered with a single dome raised on a tall circular drum. The dome is carried on eight pointed arches that rest on eight octagonal piers embedded halfway into the walls. Joined together to form an octagonal belt, the arches allow the transition from the circular drum to the square base, and exedras roofed with semi-domes complete the four corners of the square.

The mihrab is set in a stalactite niche encased in a tall, carved frame, in axis with the entrance, and a wooden minbar stands to its right. Well-lit through windows at the ground, clerestory and dome level, the interior of the mosque is painted with traditional tile motifs in pale shades of red and blue. The simplicity of structure in this small, well-proportioned mosque is enhanced with subtle details on the exterior that animate its otherwise plain appearance.

The eight piers supporting the dome are extended on the exterior as mini turrets flanking the circular drum. Pilasters separating the windows on the drum reveal neo-classical influences. The cornice line is stepped at the base of each turret; the semi-domes of the exedras complete the roof composition at the four corners. A single minaret, with a tall square base and multi-faceted shaft, adjoins the western corner of the mosque.

The mosque is built of cut stone. It consists of a domed prayer hall and a three-bay portico to the northwest, the entrance of which has a plaque with gold letters inscribed on it. Side bays of the portico have raised floors that are outlined with marble balustrades. On the left side of the portico, there are stairs leading up to a wooden balcony which is used only by women. The prayer hall has a square plan that is roofed with a large single dome standing on a circular drum.

Eight arches, joined together to form an octagonal belt, carry the dome and are supported by eight octagonal piers. On the four corners of the square, there are exedras covered with semi-domes. The mihrab has a stalactite niche encased in a carved frame. The wooden structure (minbar) is on the right of the mihrab. The windows in the clerestory and dome allow adequate light to enter and light the interior of the mosque that is painted with traditional tile motifs in pale shades of red and blue .

On the exterior of the mosque, mini turrets appear around the circular drum, which are actually extensions of the interior eight piers supporting the dome . These mini turrets have a stepped cornice line at their base. The windows on the drum are separated by pilasters which have rather a neo-classical influence. There are semi-domes above the exedras on the four corners of the square roof  On the western corner of the mosque rises a single minaret standing on a tall square base and has a multi-faceted shaft .

The outside of the mosque is quite plain, ornamented only by small palmettes and rosettes. The inside of the dome over the central prayer area, the exedra and the window surrounds are ornamented with hand drawn rumi motifs. The mihrab takes the form of an outwardly projecting niche and is classical in shape on the interior. The wooden minber (pulpit) and dais are carved with openwork patterns.

These scripts and photographs are registered under © Copyright 2018, respected writers and photographers from the internet. All Rights Reserved.
Posted by ISTANBUL, Extended On Two Continents at 4:12 AM