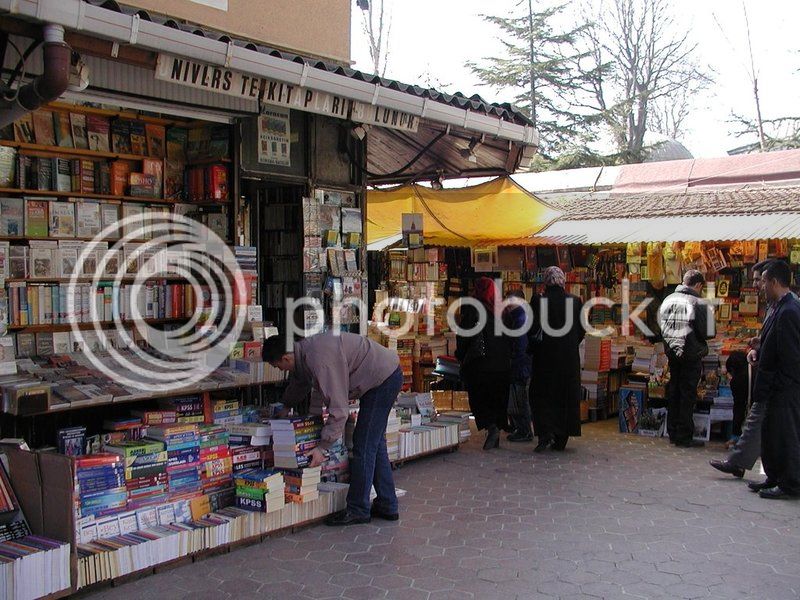 Sahaflar Çarşısı, the second hand book bazaar, is located between the Beyazıt Mosque and the Grand Bazaar, on the same site as the old Byzantine book and paper market and is the oldest book bazaar of Istanbul which stands today from Ottoman ear. Its history dates back to the 15th century. The Sahaflar Book Market has a long history dating back to the 15th century. It is located between a stony place on the left-hand side of the Beyazit Mosque and the Sedefçiler Gate of the Covered Bazaar.

During the early Ottoman period, printed books were seen as a corrupting European influence and were banned in Turkey. As a result the bazaar only sold manuscripts. Then İbrahim Müteferrika, the first Ottoman printer, produce the first printed book in Turkish language, an Arabic dictionary in 18th century. In the same century, the market remained the main point for book sale and distribution of Ottoman Empire and a meeting point for some intellectuals.

Sadly, the market lost its importance in the last half century due to rise of the modern bookstores and internet. Today, all sorts of books, from tourist guides to academic tomes can be found as well as some old books, new ones, and examples of Ottoman miniature pages. There is also a bust of İbrahim Müteferrika in the market.

In olden times, book stores used to supply the needs of madrasah students and were therefore located around the madrasahs. After the Covered Bazaar was built in 1460, these book stores were grouped together in a common area.  The stores that had operated in the Covered Bazaar until the earthquakes in 1460 and 1894 moved to their present locationg which was already known as Hakkaklar Çarşısı.

Tradesmen of the Sahaflar Book Market belonged to Antiquarian Book Stores Trade Guild. They could not open a store without obtaining degree and rank of mastership following a period of apprenticeship. They used to open and close their shops according to the times of prayer. The spiritual guide of the Bookseller Trade Guild was Basralı Abdullah Yetimi Efendi, who is also known as one of the first booksellers of the Sahaflar Book Market.

Evliya Çelebi, the famous Ottoman traveler of the 17th century, wrote in his book of travels “Seyahatname,” that there were 50 bookstores and 300 antiquarian booksellers serving scholars at the time.

The Sahaflar Book Market, including its thousands of calligraphy manuscripts, was completely destroyed in a fire during 1950. The Istanbul Metropolitan Municipality confiscated the unburned part of the Sahaflar Book Market and began restoration. The wooden shops have been made into reinforced concrete shops and it has been turned into the present Book Market. In addition, there is a fixed bust of İbrahim Müteferrika (1674-1745), the first Ottoman publisher and printer in the middle of the market.

The wooden shops have been made into reinforced concrete shops and it has been turned into the present Book Market. In addition, there is a fixed bust of İbrahim Müteferrika (1674-1745), the first Ottoman publisher and printer in the middle of the market. Today, there are 23 bookstores in the Market, 17 of which are two-story shops.

These scripts and photographs are registered under © Copyright 2016, respected writers and photographers from the internet. All Rights Reserved.
Posted by ISTANBUL, Extended On Two Continents at 1:28 PM