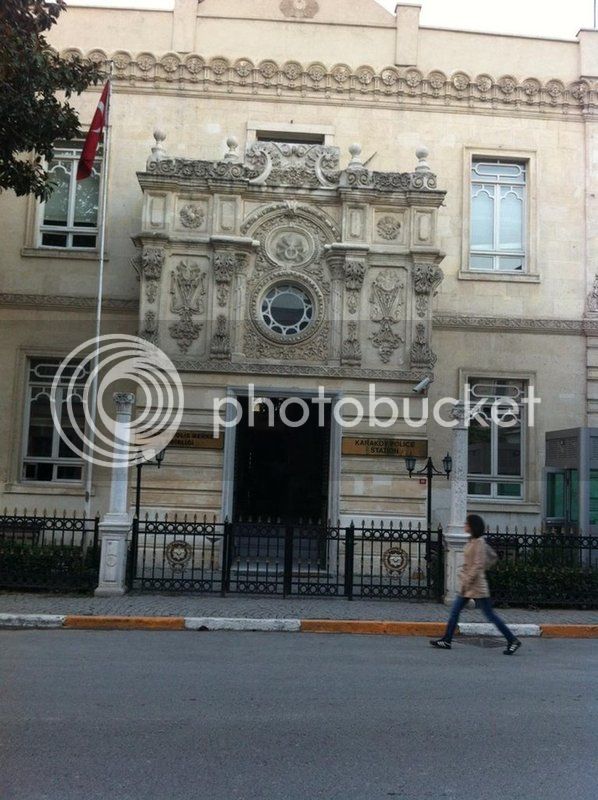 Karaköy Aziziye Karakolu (police station), by the Ottoman Palace architect Raimondo D’Aronco, originally from Italy, during the reign of Sultan Abdülhamid II. He was commissioned to build many civil and institutional buildings, all in the neo-classical style of the time.

Raimondo Tommaso D’Aronco (1857 - 1932) was an Italian architect renowned for his building designs in the style of Art Nouveau. He was the chief palace architect to the Ottoman Sultan Abdülhamid II in Istanbul, Turkey for 16 years.

This highly ornate police station had a lot of leaf motifs (thus commonly known as Süslü - decorated - Karakol) and its purpose was to monitor the significant human traffic across the Galata bridge. When in 1894 it suffered damage in an earthquake, it was repaired by the same architect. The building was later demolished and in its place in 1910 was erected the state maritime lines offices (Seyrüsefain İdaresi), which was in turn also later demolished.

These scripts and photographs are registered under © Copyright 2016, respected writers and photographers from the internet. All Rights Reserved.
Posted by ISTANBUL, Extended On Two Continents at 11:54 AM