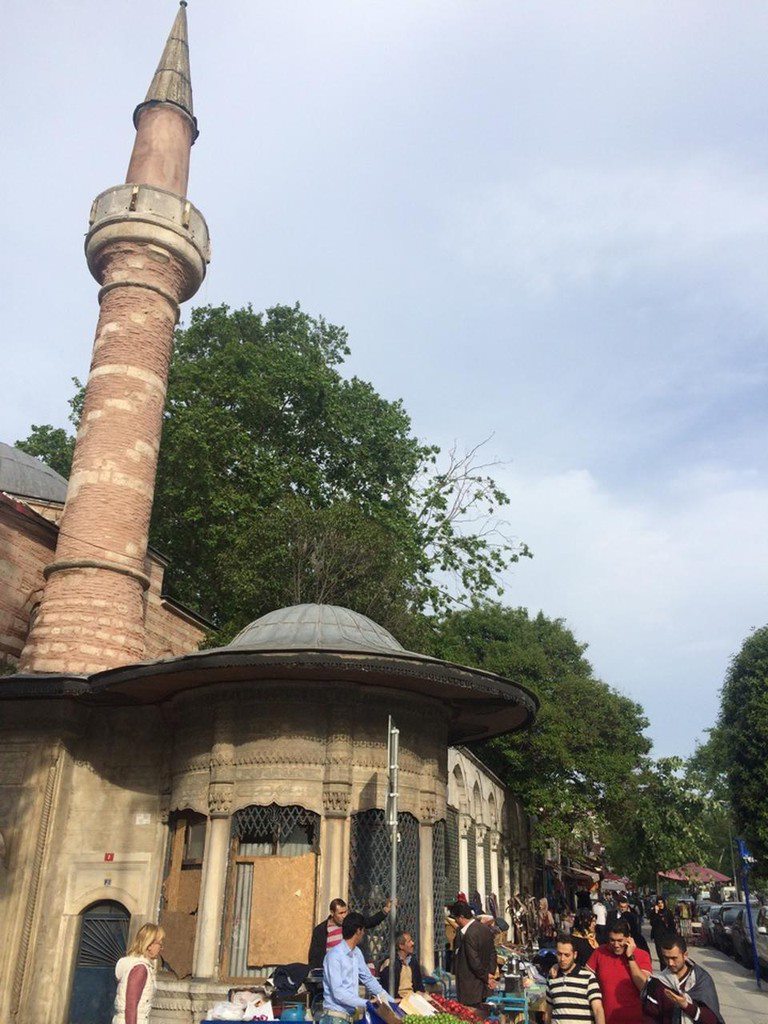 This complex was built in 1720 by the order of Damad Ibrahim Pasha (1718-1730) who held the office of Grand Vizier three times of Ottoman Empire. It is located at the corner of Dede Efendi Street and Şehzadepaşa Street. The complex was built by Chief Architect Kayserili Mehmet Ağa for Nevşehirli Damat Ibrahim Pasha in the 1720s.

It is one of the most important works of Damat Ibrahim Pasha Complex. If we consider water-tank with a fountain as the centre of Complex, Madrasa covers a half of the complex. All the other parts of complex are on the other side of water-tank. Damad Ibrahim Pasha Complex was built with the aim of being used as Darul Hadis Madrassa and library. Today madrasa is used as cultural centre by East Turkistan Foundation.

Kurşunlu Mosque is known as Damat İbrahim Pasha Mosque. However because its domes are made out of lead, locally it is called Kurşunlu Mosque (Leaded Mosque). It was built by head architect Mehmet Ağa and his foreman Serkis and located in a courtyard surrounded by high and thick walls. The courtyard has three entrances.

The exterior of the building has a simple architecture, however the interior has been adorned with stencilled motifs from the Lale Era. The minaret on the north side of the mosque is built in the baroque style and embellished with Acanthus leaves. In the years when the schoolroom of the complex was transformed into a mosque, the minaret with a sherefe (minaret balcony) was added to the present complex. This structure is the only remaining part of the complex that has survived until today.

The Ablutions Fountain stands in the middle of the courtyard, on top of 8 marble pillars and covered with lead. The body of the water tank has 12 corners. The taps are separated by small marble pillars. The gutter of the wooden interior domes is decorated with geometrical shapes and zigzags. The water-tank with a fountain of the mosque is located at the woodland in the complex.

Madrasah (School) built at the same time, it stands on the west side of the mosque. Cut stone was used in its construction. After being refurbished in 1961 it was reopened as a Public Library. The arched entry door of the madrasah contains an epigraph from Seyyid Vehbi. A square shaped courtyard holds domed madrasah rooms containing cupboards and stoves. There are also iwan rooms that were used by the students studying in the madrassa.

The rooms with eyvan, a vaulted room with one side open to a courtyard, located in the same direction of the graves, was built for madrasah (Qur'an School) students. In the period of its activity as a madrasah, it is known that the little complex had been decked out with a crowded permanent staff. Flowers motif used in the ornaments of the structure showed parallelism with the understanding of architecture during the “Tulip Era” (1718-1730) and increases its artistic value.

Library located to the north east of madrasah, it dates to 1727. The interior of this domed square structure is decorated with stencils. It is known that Damat İbrahim Pasha presented 187 volumes to the library. The structure with portico and dome, opposite the masjid on the right side of the crowned gate, is a library.

Imaret (Kitchen) built in 1726, it stands south of the madrasah. It consists of two rooms, a kitchen, toilets and a storage room carved in rock. It was used as a prison for some time and in 1949 transformed into a museum. Today it is used as a soup kitchen.

Sibyan Mektebi (Junior School) located to the south of the Imaret in the same courtyard, the first floor of this two-storey building was carved in rock. Today it is used as a storage depot. The second floor is made of cut stone and has three domed rooms each holding a window looking onto the courtyard.

Turkish Bath built in 1727 to the north of the mosque complex, it consists of separate buildings that are made out of cut stone. An octagonal saloon on the top floor holds changing rooms with wood cladding. There is an octagonal pool in the middle of the domed saloon.

Fountains are two fountains in the mosques complex; the first one is on the north wall of the mosque courtyard, and the other one, which holds an epigraph by Seyyid Vehbi (a poet), is on the supporting wall on the corner of Sibyan Mektebi. Both are adorned with various decorations. The public fountain of the complex, located on Şehzadepaşa Street, came to harm during road construction.

These scripts and photographs are registered under © Copyright 2018, respected writers and photographers from the internet. All Rights Reserved.
Posted by ISTANBUL, Extended On Two Continents at 5:07 AM