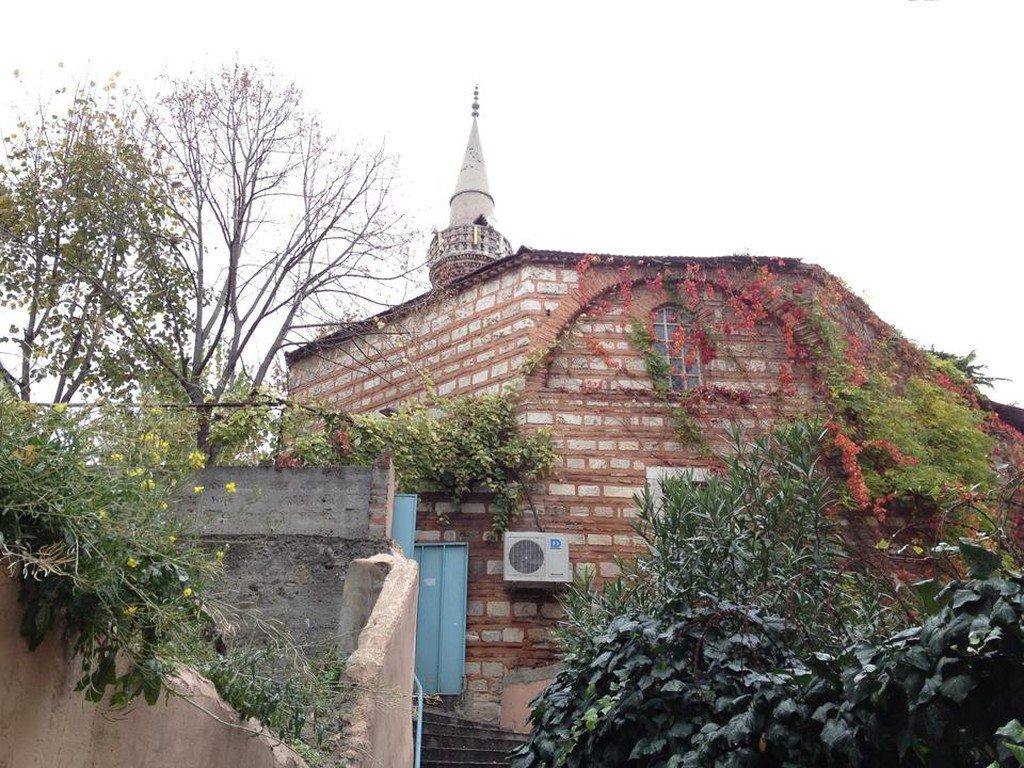 The medieval structure, choked by artisan shops, lies in Istanbul, in the district of Fatih, in the neighborhood of Kocamustafapaşa (historically Samatya), on Teberdar Sokak, about five hundred meters north east of the Kocamustafapaşa station of the suburban railway line between Sirkeci and Halkalı.

Sancaktar Hayrettin Mosque (Turkish: Sancaktar Hayrettin Câmîi; also Sancaktar Hayrettin Mescidi, where Mescit is the Turkish word for a small mosque, or Sancaktar Mescidi) is part of a former Eastern Orthodox monastery converted into a mosque by the Ottomans. It is generally believed that the small building belonged to the Byzantine Monastery of Gastria, meaning "Monastery of the Vases". The edifice is a minor example of Palaiologan architecture in Constantinople, and is important for historical reasons.

The origin of this building, which lies on the southern slope of the seventh hill of Constantinople and overlooks the Sea of Marmara, is not certain. The tradition says that in year 325 Helena, the mother of Constantine I, coming back from Jerusalem with the True Cross and entering the City through the Port tou Psomatheou, left in this place some vases (Gastria) containing aromatic herbs collected on Calvary. Then she founded there a nunnery. In reality, no monastery was established in Constantinople before the last quarter of the fourth century, so this has to be considered only a legend.

The nunnery of Gastria was first mentioned at the beginning of the ninth century. At that time Theoctista, mother of Empress Theodora (wife of Emperor Theophilos and restorer of the cult of the icons) bought in the quarter of Psamathia a house from the Patrician Nicetas (possibly Saint Nicetas the Patrician), and established there a nunnery. The title of Ktētorissa (foundress), together with the property of the buildings, was inherited by her daughter Theodora.

Together with her daughters Anna, Anastasia and Pulcheria, Theodora was removed to the monastery by her brother Bardas after her deposition. All of them were forced to accept the tonsure. Emperor Constantine VII Porphyrogenitus writes in his book De Ceremoniis that the church of the nunnery served also as a mausoleum for the members of Theodora's family. The Empress, her brother Petronas, her mother and her three daughters were all buried there.

The last mention of Gastria before 1453 comes from a Russian pilgrim, who visited the City during the second quarter of the fifteenth century. He remembers a nunnery placed near the Golden Gate, where the relics of Saint Euphemia and Saint Eudokia were venerated. This building could well be identified with Gastria.

This mosque is situated in the quarter of Samatya, at a short distance to the north of the Armenian church of S. George (Sulu Monastir), which stands on the site of the Byzantine church of S. Mary Peribleptos. Paspates, who first recognized the Byzantine character of the edifice, regards it as the chapel attached to the convent of the Gastria, i.e. in the district of the Flower-pots.

The building is situated in the district of Psamathia, where the convent of the Gastria stood; secondly, it is in the neighbourhood of the Studion, with which the convent of the Gastria was closely associated during the iconoclastic controversy; thirdly, the copious and perennial stream of water that flows through the grounds below the mosque would favour the existence of a flower-garden in this part of the city, and thus give occasion for the bestowal of the name Gastria upon the locality.

The argument is by no means conclusive. A more fanciful explanation of the name of the district is given by Byzantine etymologists after their wont. According to them the name was due to the circumstance that the Empress Helena, upon her return from Jerusalem with her great discovery of the Holy Cross, disembarked at Psamathia, and having founded a convent there, adorned its garden with the pots of fragrant shrubs which accompanied the sacred tree on the voyage from Palestine.

More sober historians ascribe the foundation of the convent to Euphrosyne, the step-mother of the Emperor Theophilus, 466 or to his mother-in-law Theoctista. 467 Both ladies, it is certain, were interested in the House, the former taking the veil there, 468 while the latter resided in the immediate neighbourhood. 469 Probably the convent was indebted to both those pious women for benefactions, and it was unquestionably in their day that the monastery acquired its greatest fame as the centre of female influence in support of the cause of eikons.

Theoctista was especially active in that cause, and through her connection with the court not only strengthened the opposition to the policy of her son-in-law, but also disturbed the domestic peace of the imperial family. Whenever the daughters of Theophilus visited her she took the opportunity to condemn their father's views, and would press her eikons on the girls' lips for adoration.

On the occasion of the breach between Theodora and her son Michael III., on account of the murder of her friend and counsellor Theoctistos at Michael's order, she and her four daughters, Thekla, Anastasia, Anna, and Pulcheria, were confined in the Gastria, and there, with the exception of Anna, they were eventually buried. At the Gastria were shown also the tombs of Theoctista, her son Petronas, Irene the daughter of Bardas, and a small chest containing the lower jaw of Bardas himself. It is this connection with the family of Theophilus, in life and in death, that lends chief interest to the Gastria.

Shortly after the Fall of Constantinople, Hayrettin Effendi, Sancaktar (standard-bearer) of Sultan Mehmed II, converted the building into a mescit (oratory) and was buried there. The charter for this religious foundation has not survived. The great earthquake of 1894, which had its epicentre under the Sea of Marmara, partially destroyed the mosque, which was restored only between 1973 and 1976.

Due to its small dimension, the building cannot be identified with the church of the nunnery, but rather with a martyrion (burial chapel) or a mausoleum, which can be dated to the Palaiologan period (14th century). The building had the shape of an irregular octagon with a cross-shaped interior and an apse oriented toward East. Light penetrates into the building through windows opened on alternate sides, which illuminate the arms of the cross-shaped interior.

Each window is inside a blind arch which spans the whole side. The masonry uses alternate courses of brick and ashlar, giving to the exterior the polychromy typical of the Palaiologan period. Remnants of walls still present in the northwest and south sides before the restoration showed that the building was not isolated, but connected with other edifices. A minaret has also been added to the restored building.

Although the building is now almost a complete ruin, it still preserves some architectural interest. On the exterior it is an octagonal structure, with a large arch on each side rising to the cornice, and thus presents a strong likeness to the Byzantine building known as Sheik Suleiman Mesjedi, near the Pantokrator. The northern, southern, and western arches are pierced by windows.

The entrance is in the western arch. The interior presents the form of an equal-armed cross, the arms being deep recesses covered with semicircular vaults. The dome over the central area has fallen in. The apse, semicircular within and showing five sides on the exterior, is attached to the eastern arm. Its three central sides are occupied by a triple-shafted window. Two shallow niches represent the usual apsidal chambers.

A similar niche is found also on both sides of the entrance and on the eastern side of the northern arm of the cross. In the wall to the west of the southern arch is a small chamber. The joint between the apse and the body of the building is straight, with no bond in the masonry; nor is the masonry of the two parts of the same character.

In the former it is in alternate courses of brick and stone, while in the latter we find many brick courses and only an occasional stone band. Evidently the apse is a later addition. In view of these facts, the probable conclusion is that the building was originally not a church but a library, and that it was transformed into a church at some subsequent period in its history to meet some special demand.

These scripts and photographs are registered under © Copyright 2017, respected writers and photographers from the internet. All Rights Reserved.
Posted by ISTANBUL, Extended On Two Continents at 8:48 AM