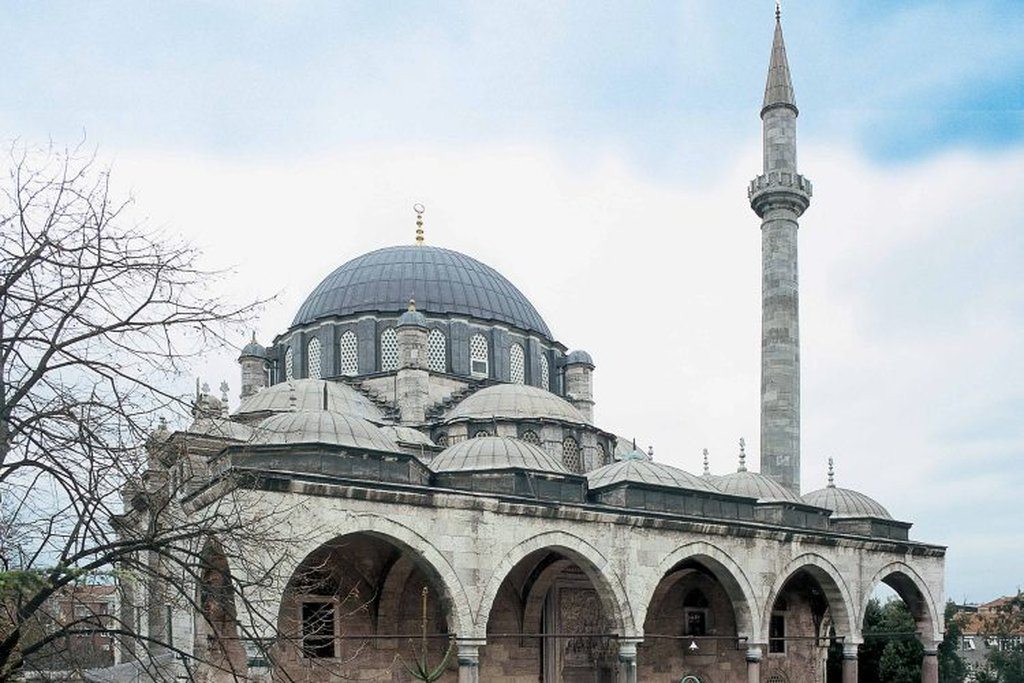 Hekimoğlu Ali Paşa was the son (oğlu) of a court physician (hekim) and himself was Grand Vezir for 15 years under Sultan Mahmut I. The mosque dates from 1734-35, the architect was Ömer Ağa. It has characteristics of the classical style and of the new baroque style.

This classically planned three gated mosque was consructed of kufeki stones and adorned with tiles from Tekfur Palace. Inside lighted by hundred windows, the main dome of the mosque is borne by six elephant feet. In the tile panel around the mihrab, Ayet-el Kursi (a verse) is written. The mosque was partly rebuilt, and the minaret completely in 1960.

Along with the mosque, a tomb, lodge, fountain, library, public fountain were built as a part of the social complex. Made from sandstone, the mosque has 3 three courtyard doors and 3 three main doors. The entrance door is stone-vaulted and there are stairs rising up to the main doors.The courtyard is covered with stones and there are pine and plane trees in the garden of the mosque.

The fountain has a wooden roof supported by six marble columns. Next to the fountain, there is a lodge where the tombs of Hekimoglu Ali Pasha and his family were situated. Moreover, the beautiful tiles which were used for interior decoration consists of a large part of the tiles used in the old Byzantine architecture, the Tekfur Palace. The other tiles were brought from Kutahya which is famous for its kiln products and well-known as a tile center of Turkey. The minbar in the narthex gained recognition as a unique piece of art.

At the corner of the precinct wall beside the north entrance is a very beautiful sebil of marble with five bronze grilles; above runs an elaborate frieze with a long inscription and fine carvings of vines, flowers and rosettes in the new rococo style that had recently been introduced from France. The façade of the türbe along the street is faced in marble, corbelled out towards the top and with a çeşme at the far end. It is a large rectangular building with two domes dividing it into two equal square areas.

Farther along the precinct wall stands the monumental gateway with a domed chamber above; this was the library of the foundation. Though the manuscripts have been transferred elsewhere, it still contains the painted wooden cages with grilles in which they were stored; an elegant floral frieze runs round the top of the walls and floral medallions adorn the dome.

From the columned porch at the top of the steps leading to the library, one commands a good view of the whole complex, with its singularly attractive garden full of tall cypresses and aged plane trees, and opposite the stately porch and very slender minaret of the mosque.

The mosque itself, raised on a substructure containing a cistern, is purely classical in form. Indeed its plan is almost an exact replica of that at Cerrah Paşa, which we saw earlier on this tour. In contrast to that, the present building is perhaps a little weak and effeminate; there is a certain blurring of forms and enervating of structural distinctions, an effect not mitigated by the pale colour of the tilerevetment.

The tiles are still Turkish, not manufactured at Iznik as formerly, but at the recently established kilns at Tekfur Saray. All the same, the general impression of the interior is charming if not exactly powerful. There is a further hint of the new baroque style in one of its less pleasing traits in some of the capitals of the columns both in the porch and beneath the sultan’s loge.

The traditional stalactite and lozenge capitals have been abandoned there in favour of a very weak and characterless form, such as an impost capital which seems quite out of scale and out of place. The whole complex within the precinct wall has been very completely and very well restored. Outside the precinct, across the street to the north-east, stands the tekke of the foundation, but little is left of it save a very ruinous zaviye, or rooms for the dervish ceremonies.

According to the Turkish inscription upon its gate, the madrasah was built by the Architect Ömer Ağa between in years 1734 and 1735. The books of the library, consructed on the top of main gate, were carried to the Süleymaniye Library.

Next to the fountain, there is a lodge where the tombs of Hekimoglu Ali Pasha and his family were situated. The Pasha, who became grand vizier thrice, was killed by being poisoned in Kütahya in 1758. The square planned tomb of Ali Pasha was built by Architect Mustafa Ağa and Simon Kalfa.

These scripts and photographs are registered under © Copyright 2018, respected writers and photographers from the internet. All Rights Reserved.
Posted by ISTANBUL, Extended On Two Continents at 6:32 AM