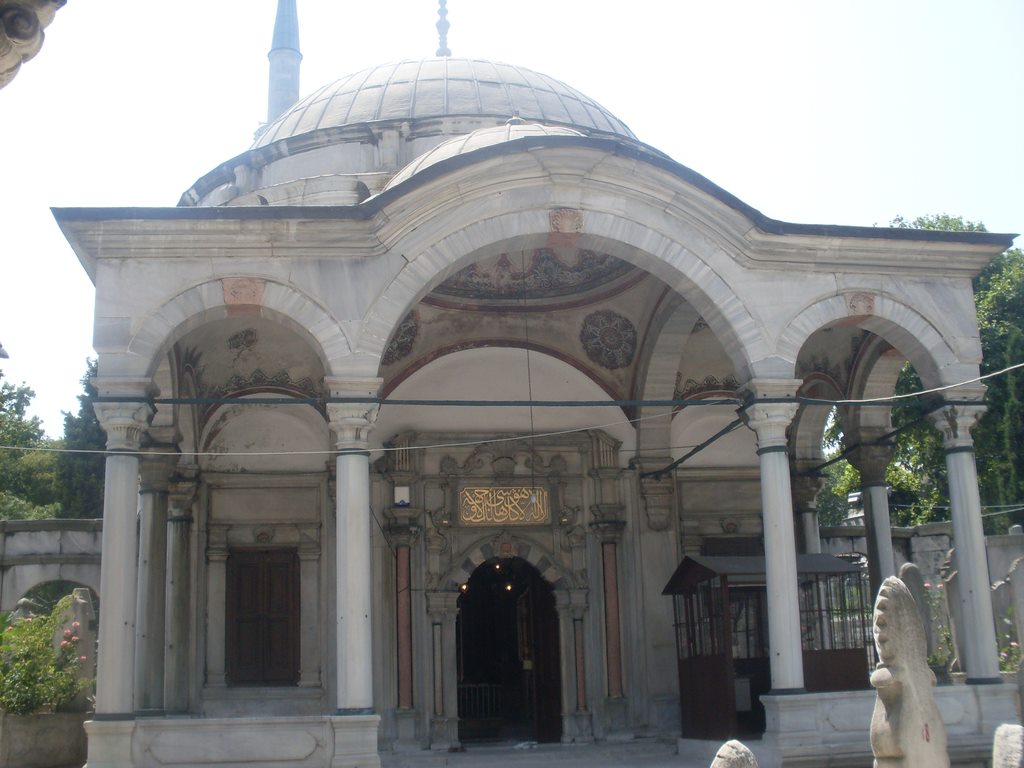 The inscription on the baroque - rococo style fountain, which dates to 1795 and is in the southeast direction of the complex, belongs to Galip who was the sheikh of the Galata Mevlevihane. The tomb, which was built in 1792 for Mihrişah Sultan who died in 1805, is a quite beautiful example of the Ottoman baroque style. The names of the Prophet Muhammad and four caliphs were inscribed on the roundels between the window arches.

Leaving Eyüp Mosque by the north gate, one finds oneself in a narrow street that leads down to the Golden Horn. Most of the left side of this street is occupied by the enormous külliye built in 1794 by Mihrişah Valide Sultan. This is one of the largest and most elaborate of all the baroque complexes and includes the türbe of the foundress together with a mektep, an imaret, and a splendid sebil and çeşmes.

The türbe is round, but the façade undulates turning it into a polygon, the various faces being separated by slender columns of red or dark grey marble; in general it recalls the türbe of Nakşidil at Fatih, though it is not quite so flamboyant.

The entrance is in a little courtyard filled with tombstones and trees, along one side of which runs the columned portico of the mektep or primary school.

Farther along the street another monumental gateway leads into the vast courtyard with more and tombstones and surrounded on three sides by the porticoes of the huge imaret or public kitchen. This is one of the very few imarets in Istanbul which still fulfil their function as food kitchens for the poor of the district; some 500 people are served daily at 11 o’clock with food to take away.

In leaving you should notice the magnificent sebil at the end of the garden wall on the street side. Continuing towards the water, one passes on the right the türbe and on the left the library of Hüsrev Paşa, dated 1839 and both in heavy Empire style; but the domes of the library reading-rooms contain a good example of that horrendous Italianate comic opera painted decoration of garlands, draperies and columns, which is so distressing when it occurs in classical buildings but is quite appropriate here.

These scripts and photographs are registered under © Copyright 2018, respected writers and photographers from the internet. All Rights Reserved.
Posted by ISTANBUL, Extended On Two Continents at 12:39 AM