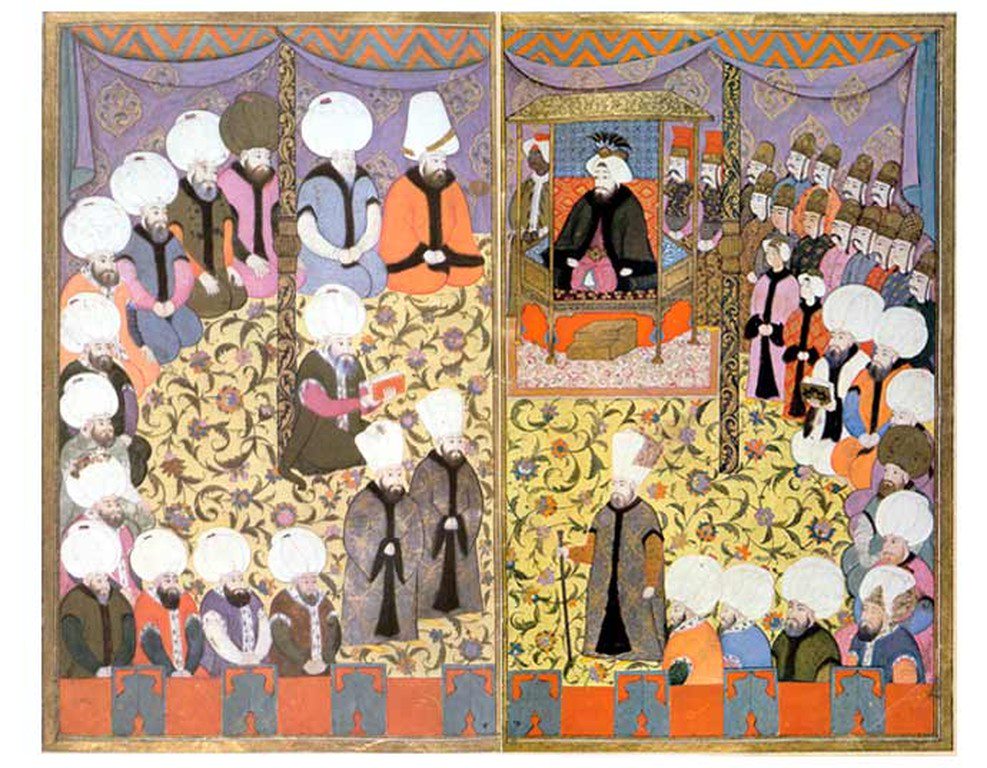 Adjacent to the north of the Imperial Treasury lie the pages dormitory, which have been turned into the Miniature and Portrait Gallery Museum. On the lower floor is a collection of important calligraphies and miniatures. In the displays one can see old and very precious Korans (12th-17th c.), hand-painted and hand-written in Kufic and also a bible from the 4th century, written in Arabic.

The following items represent museum's outstanding group of Islamic miniature paintings, found in illustrated copies of classic works and as surviving fragments pasted or bound into albums in the former royal libraries. The first examples of the Ottoman miniature paintings were produced under the patronage of Fatih Sultan Mehmet (Mehmet the Conqueror ) in mid 15th century. An important feature of the Ottoman miniatures is the realistic portrayal of actual events while adhering to the traditional rules of Islamic art.

Topkapı's priceless collection encompasses not only Ottoman works but also those of many different dynasties and regions within the Islamic world, including Baghdad and Mosul in Mesopotamia (13th century); Il-Khanid Tabriz and Muzaffarid Shiraz (14th century); and Akkoyunlu Shiraz and Tabriz, Timurid Herat, and Safavid Shiraz and Tabriz (15th century). Included are scientific works such as Dioscorides' Materia Medica; romances such as the fables of Khalila and Dimna; the Khamsa of Nizami, the Shahname of Firdawsi; and later Ottoman works such as the Süleymanname and the Selimname, in praise of the exploits of individual sultans.

Although the extent to which the early Islamic dynasties depend upon their pre-Islamic past was limited, this was much less true for the natural sciences like physics, mathematics, medicine, astronomy, botany, and chemistry. There are records of the Umayyad Caliphs' attempts to obtain scientific manuscripts of Byzantium, Iran or India.

Under the Abbasids in Baghdad, this movement gained strength (800's). Persian, Egyptian, North African, Spanish and Central Asian (Samanid library) manuscripts were the results of the learnings of the dispersed Abbasid Court. The following illustrations are mostly from these scientific books. There are also illustrations of Kalila wa Dimna and some Persian fables of the same era.

There are very few secular illustrated texts which survive from late Antiquity or Byzantium. The rise of illustrated secular works under Islam occur in the late 12th and 13th centuries. Kalila wa Dimna were the examples of these works that illustrate the appearance of an immensely rich merchant class in the Near East with means and pretensions to ape the rulers. Meanwhile, the Persian paintings were mostly about the pride of the kings and rulers. There were also religious Persian paintings which represent the Persian interpretations of Islam.

Between 1218 and 1220, the Mongols under Jenghis Khan swept into Western Asia. Though their invasion was neither as complete nor as immediate as is often believed, by the late 13th century Mongol states ruled all the way from Mesopotamia to China. In the field of painting the Mongol invasions had important consequences. In Mamluk Syria and Egypt, the Mesopotamian tradition of manuscript illustration was concentrated.

In Anatolia, Mongol over lordship after 1243 stifled architectural and artistic patronage. Most of the states in Anatolia and Central Asia were not fruitful in terms of manuscripts during that time, therefore it was Iran and Mesopotamia that major artistic developments occurred, on a scale which far surpassed anything of earlier centuries. The schools of Tabriz and Shiraz are presented in this page. Most of the depicted illustrations are from Shah-nama's (book of kings) of different rulers and important personalities including Zal, Simurgh, Iskandar, Isfandiyar, Munichir and Bahram Gur.

The Muzaffarid era which ruled and dominated the Shiraz art was brought to an end by Tamerlane (Timur). Timur had established himself at Samarkand in 1370 and for the next 35 years campaigned all over Asia, Iran, Mesopotamia, Syria, North India and Anatolia (after the Ottomans were defeated at the battle of Ankara in 1402). The effects of Timur (Timur was a Turk) were different than the Mongolian invasion effect in terms of art, economics and social systems. The paintings can be categorized as secular art. Paintings from Kalila wa Dimna and Khamsa are depicted in this page as well as some illustrations showing various entertainments.

The Chinese dynasties had a dominant effect on Mongol and East Turkestan painting. The effect was brought to Western Asia by Mongols and Persians. During the time of Timur, the relations between Turcomans and the Ming Court were concrete. Under Shah Rukh relations with China became more cordial, however the Ming returned to neo Confucian practice and the traditional tributary relations and the gift exchange with the hope of making a good Muslim out of Ming stopped.

In any case, the overland trade between China and Central Asia stayed steady. The effects of the Chinese and Central Asian artistic style became dominant in early 1400s. The miniatures depicted in this page are attributed to Mehmed Siyah Qalem and other Siyah Qalem school painters.

The Uzbek occupation of Herat in 1506-7 under Muhammad Shaybani inaugurated a period of instability in Khurasan. Herat did not, however, lose its pre-eminence in the arts of the book, but the principal Herati painters gradually dispersed towards Tashkent, Bukhara and Tabriz. Much Bukhara painting of the mid-sixteenth century is in the style of Bihzad school, albeit with simplification of architectural detail, a narrower range of brilliant colours and, ultimately, figure painting lacking in realism and vivacity.

The Safavids occupied Tabriz in 1501 and their leader Ismail had himself crowned Shah of Iran. Their art was inspired by nationalistic sentiments as well as Turcoman painters of the Akkoyunlu studio. The successor of Ismail, Shah Tahmasp worked on a great illuminated Khamsa of Nizami, written by calligrapher Shah Mahmud al-Naysaburi. The other fine manuscript, Shahname, had dispersed after it was presented to the Ottoman Sultan Selim II in 1567. The depicted illustrations are from Khamsa of Nizami.

After the defeat at the Battle of Ankara against Timur, the Ottomans began their expansion in Anatolia by annexation. When the Balkan expansion started, they had already established a strong state in Anatolia. By capturing Constantinople in 1453, Mehmed acquired the sobriquet of "the Conqueror". There followed the subjection of Genoese colonies on the Black Sea, and the capture of Tirebizond; the invasion of the Morea, northern Albania and Bosnia.

Central to Mehmed's view of the Ottoman state was the conviction that by the conquest of Constantinople the Ottomans had made themselves the heirs of Byzantium and of the Caesars. In this way, his attitude towards European art and literature was influenced. In this page, the portraits of Mehmed and pictures from early Ottoman translations of Persian fables are depicted.

The conquest of Yavuz Sultan Selim I had brought to the Ottomans the tradition of the Abbasid Caliphate, and their status had suddenly grown to that of a world power. Under Süleyman the Magnificent, the expansion was even faster and the Ottoman empire more or less became the world power. The long term age was a fruitful period in terms of arts.

Many artists from Central Asia, Balkans, North Africa and Mesopotamia were gathered in Istanbul, and so were their schools. Many paintings, scripts and topographical prints were produced at that time. The illustrations in this page are depicted from Süleymanname, Hünername, Sahansahname, Surname and other individual scripts of heroic deeds of Sultans.

The Ottoman studio not only dealt with the splendors of everyday life and glories of the blood and State, self-satisfiedly accepting their position as the pivot on which the destinies of Europe and Asia turned, but with Koran illuminations, prayer books, mystical works and poems, history, law, theology, education and mosques as well. The works of Nakkaş Osman and other Siyer-i Nebi illustrations are presented here.

The western artistic effects were influential on the Ottoman artistic style after the seventeenth century, until which the incessant wars and military campaigns together with the religious effects were the main elements of art. The change in taste or fashion was towards more intimate figure studies and scenes from daily life. Surname's of Sultan's show many scenes from festivities. There are other individual scientific and artistic paintings which reflect western styles of idea and art.

These scripts and photographs are registered under © Copyright 2018, respected writers and photographers from the internet. All Rights Reserved.
Posted by ISTANBUL, Extended On Two Continents at 3:20 AM