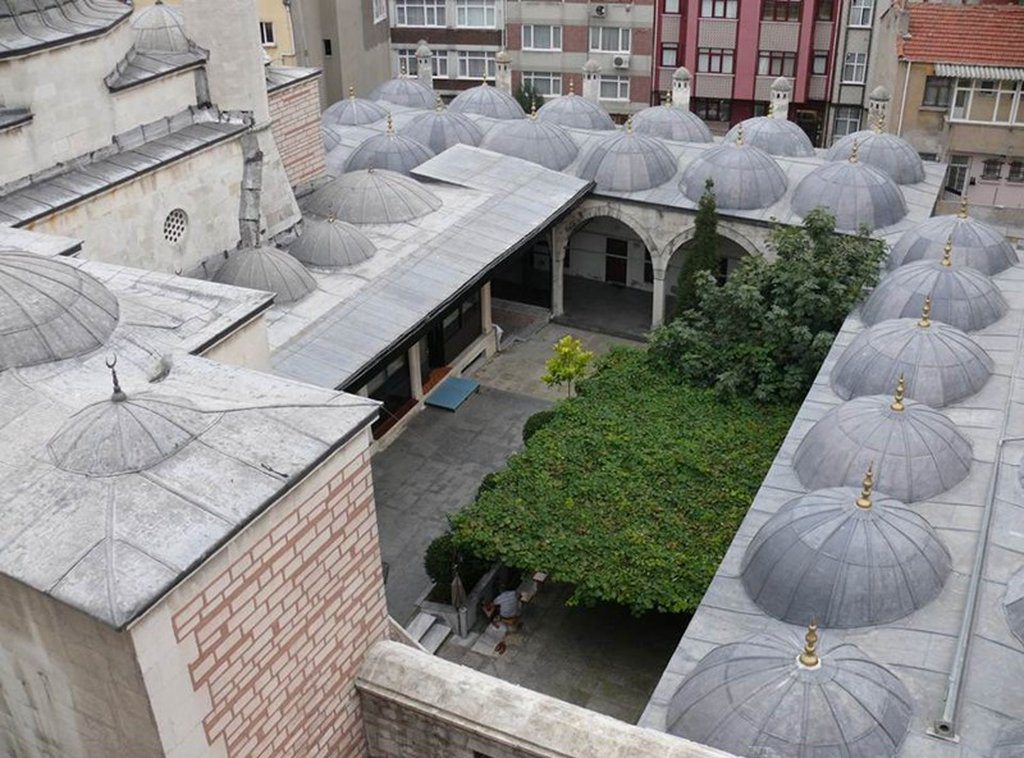 It is located between Fatih Avenue and Hafiz Pasha Street in Küçükkaraman in Fatih. It was constructed along with Madrasah, Daru’l Kurra and Public Fountain in 1595 upon the order of Hafiz Ahmet Pasha who was the Sadaret Governor and Grand Vizier of Sultan Murat IV.

Hafız Ahmed Pasha (1564 in Plovdiv, Bulgaria – 10 February 1632 in Istanbul), also known by epithet Müezzinzade ("muezzin's son"), was an Ottoman grand vizier. Born as son of a Pomak muezzin, he went to Istanbul at the age of 15 and was an employee in the sultan's palace for many years. From 1609 on, he became Governor of Damascus (Syria), Van (Turkey), Erzurum (Turkey), Baghdad (Iraq), and other Anatolian eyalets.

The kulliye consisting of the mosque, madrasah, Daru’l Kurra, public fountain and the fountain had been ruined during the 1918, Fatih fire and all the parts of it except 14 madrasahs, collapsed and some part of the walls could stand. The kulliye which was damaged heavily during the earthquake of 1648, fires of 1782 and 1918 was restord for many times.

There were baroque decorations on the balcony of the minaret and inside the dome of the mausoleum. In the kuliyat which stayed as ruined for a long time after the fire of 1918, the public fountain compietely burnt out, and the most parts of the mausoleum, mosque, darulkurra, and madrasah porticos burnt out.

The restoration of the kulliye was initiated by the chamber of foundations in 1976 and the madrasah was partly restored while the mosque was left unfinished. Beginning from 1990 with the support of Selam Foundation the mosque was restored with its minaret and opened to worshipping.

The mosque on the south of the kulliye has a transverse plan with a square place in the middle and sub-places smaller in size and having a square plam again on both sides. Marble covered mihrab niche which was restored is heptagon and its top was ended with muqarnas veil.

The minaret which has sixteen bodies over the original concrete square base was covered leaded cone. In the old pictures the elliptical transition of 18th century baroque style on the balcony and girlant decorations on the parapets are seen.

These scripts and photographs are registered under © Copyright 2018, respected writers and photographers from the internet. All Rights Reserved.
Posted by ISTANBUL, Extended On Two Continents at 10:52 PM