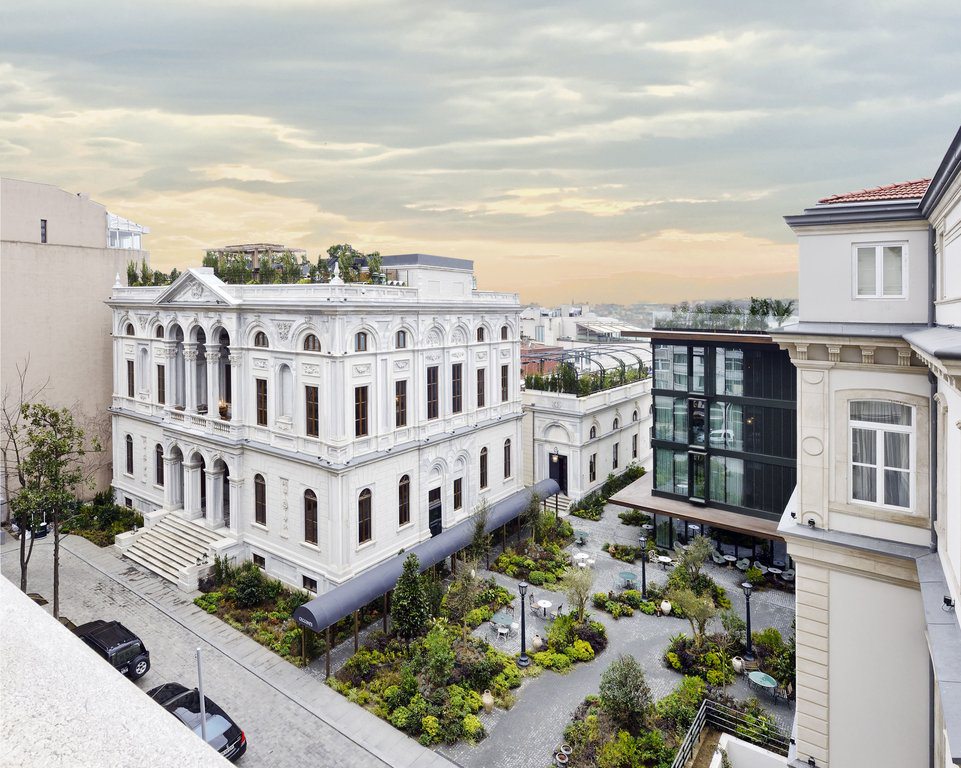 In the year 1830, a young Genoese shipowner named Ignazio Corpi established himself at Constantinople with his mother, sister and one or more brothers. Signor Corpi and his family prospered, becoming prominent in local charitable activities on behalf of indigent and elderly Latin Catholics. The Corpis were instrumental in building the local Italian hospital, which functions to this day. In 1873, Signor Corpi called the architect Giacomo Leoni from Italy, and charged him with building a palatial residence that would bear the Corpi family’s name.

Georgio Stampa, another architect, who worked on the British and Persian embassies and other important buildings in Constantinople at that time, apparently also took part in Palazzo Corpi’s construction. Most of the building materials were imported from Italy - doors and window frames of rosewood from Piemonte, and marble flooring and facings from Carrara. The ground-floor reception hall was remarkable for the beauty of frescoes representing mythological scenes, while frescoes over the grand stairway and Great Hall upstairs represented Bacchic and other classical subjects.

To the magnificent frescoes were added finely etched glasswork, inlaid parquet floors, elegant fireplaces and other exquisite artistic/architectural features too numerous to mention. All the frescoes were executed by Italian artists brought to Constantinople by the architect Leoni. Sadly, during a "renovation" in 1937, the walls and ceilings on the ground floor were plastered and/or painted over.

Left untouched on the ceiling of the upstairs Great Hall, but vulnerable to annual accumulations of Istanbul grime, were depictions of Diana, Neptune, eight Muses, various Graces, Bacchantes and other mythological figures. These decorations remained largely hidden until 1992, when a series of expert restorations undertaken by post management with the cooperation of Turkish artisans and the Department’s Office of Overseas Buildings Operations gradually returned them to their original splendor.

It is recorded that Palazzo Corpi’s construction, which spanned the entire decade of the 1870s. The building was barely finished when Ignazio Corpi died, and the Palazzo was inherited by his nephews, who rented it to the American government starting in 1882. The circumstances under which the U.S. government assumed outright possession of Palazzo Corpi in 1907 make a fascinating and dramatic story in its own right.

Palazzo Corpi is an Italianate villa constructed in the 1870s in the historic Beyoğlu district of what was then the capital of the Ottoman Empire. The U.S. government leased the villa as alegation facility and residence and then purchased it from the Corpi family in 1906 for use as the embassy and official residence of the U.S. ambassador. With the move of the embassy to the new capital city, Ankara, in 1937, the villa became the U.S. Consulate General until its relocation to a new facility in 2003.

As one of the first real estate purchases by the U.S. government to house a diplomatic mission, the building is unquestionably imbued with history. That is why in 2004 the U.S. Congress required the government to maintain ownership of the property even after relocation of the consulate general. The site symbolizes the U.S.-Turkey relationship, from the fall of the Ottoman Empire and founding of the new republic to Turkey’s accession to NATO.

The preservation of the palazzo presented planners from the State Department’s Office of Overseas Buildings Operations (OBO) with a challenge and an opportunity. Responding to the congressional mandate, OBO signed a 51-year lease with a development company in 2008 to restore and expand the complex as a luxury hotel. Once completed, the project will include more than 160,000 square feet of internal space and house a hotel with 84 rooms, conference facilities, a club bar and two restaurants.

In its work, the development company preserved historic details of the palazzo, which is protected under Turkish historic preservation laws. Experts worked for months to restore and renew such unique characteristics as the hand-painted scenes on its ceilings and walls, and its intricate plaster moldings and woodwork.

Two other historic structures on the site, the former chancery and annex, are also being repurposed. The annex was built as an apartment building during the same era and was later the home of the "Constantinople Club" until it was purchased by the U.S. in 1949 as consulate office space. It will now house the hotel’s suites and a café.

The developers worked closely with OBO’s Architectural Design branch and the Cultural Heritage Program and Consulate General Istanbul, coordination that has allowed the CG Istanbul management team and front office to follow the work closely.

The latest outpost of Soho House, in Palazzo Corpi, has history in spades. Built by a Genoese shipping magnate with a penchant for Carrara marble floors and Italian rosewood, the palazzo served as the US embassy until its all-too-ostentatious location forced its move to safer suburbs in 2003.

Open since spring 2015, the palazzo’s renovated refinement pans from original frescoes to 1,000-crystal chandeliers. Contemporary accoutrements include a private hammam and a rooftop splashpool (watch the Golden Horn sunset as you cool off). However, Soho House is far from cheap, but even the budget-conscious might wish to splash out for a night in a room with Ottoman-inspired art-deco furnishings.

ROOM
87 ROOMS
OF VARIOUS SIZES, INCLUDING 17 MEZZANINE ROOMS AND ONE APARTMENT

THE APARTMENT
A VAST MODERN SPACE FOR LONG AND SHORT TERM LETS
A vast 282 sqm modern space including a 129 sqm terrace available to hire for short- to long-term lets. Offering a super king-size bed, walk-in rainforest shower and bathtub, fully integrated kitchen and bar, dining table seating 10, living space, a large terrace with a Jacuzzi and a BBQ, the Apartment is the perfect base to lodge, live and entertain in Istanbul.

The Allis Istanbul
Housed in the Glass Building, the Allis Istanbul serves light breakfasts and lunches, mezzes in the evening and Afternoon Tea from 3-6 pm, as well as coffee, fresh juices and craft cocktails. The lunch and dinner menu changes daily. Open all day to the general public, this lounge and bar with outdoor seating and views of the Palazzo Corpi, is a relaxed and sociable place for meetings, a quick bite to eat or late-night cocktails.

Cecconi's Istanbul
In the courtyard of the 19th century Palazzo Corpi Building, Cecconi’s is a modern day classic Italian restaurant open for lunch and dinner, seven days a week. Brunch is served on Sunday. Tables are available indoors or outdoors, set among the garden’s olive trees.

The Cowshed Spa and hammam are where members and non-members can relax and unwind. Again, members enjoy a discount on all treatments here as well. Neville inside the spa offers ‘British grooming for gents’ from haircuts to beard shaping, and if that is not enough you can treat yourself to everything from pedicures and facials to massages and hammam packages, all performed applying Cowshed cosmetic products.

These scripts and photographs are registered under © Copyright 2018, respected writers and photographers from the internet. All Rights Reserved.
Posted by ISTANBUL, Extended On Two Continents at 5:03 AM