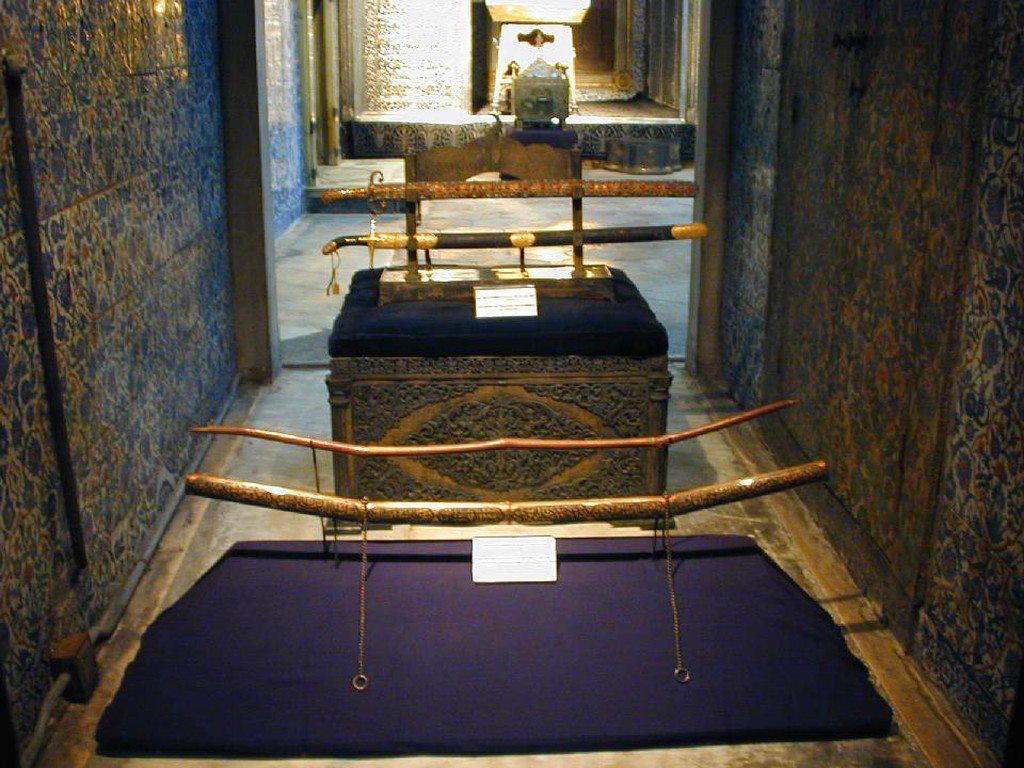 They are housed in the former private chambers of the sultan, called the Privy Chamber, which are located in the Third Courtyard of the palace. The Privy Chamber houses the Chamber of the Sacred Relics (Kutsal Emanetler Dairesi), which includes the Pavilion of the Holy Mantle. The chamber was constructed by architect Sinan under the reign of Sultan Murad III. It used to house offices of the Sultan. It houses the cloak of the prophet Muhammad, his sword, one tooth, a hair of his beard, his battle sabres, an autographed letter and other relics which are known as the Sacred Trusts.

Several other sacred objects are on display, such as the swords of the first four Caliphs, the staff of Moses, the turban of Joseph and a carpet of the daughter of Mohammed. Even the Sultan and his family were permitted entrance only once a year, on the 15th day of Ramadan, during the time when the palace was a residence. Now any visitor can see these items and many Muslims come on pilgrimage for this purpose.

The Arcade of the Chamber of the Holy Mantle was added in the reign of Sultan Murad III, but was altered when the Circumcision Room was added. This arcade may have been built on the site of the Temple of Poseidon, that was transformed before the 10th century into the Church of St. Menas. The Sacred Relics consist of Islamic religious pieces sent to the Ottoman Sultans at various times dating from the 16th century to the late 19th century.

With the conquest of the Arabic world under Yavuz Sultan Selim I (1517), the Caliphate passed from the vanquished Abbasids to the Ottoman sultans. The Prophet Muhammad’s mantle, which was kept by the last Abbasid Caliph Mutawakkil III, was given to Yavuz Sultan Selim I. The various relics of the prophet, his followers and other items purportedly associated with the prophet were brought to Topkapı Palace in Istanbul, where they remain up to this day.

The Şadırvanlı Sofa is the room where the keys to the Kaaba, the gutters of the Kaaba, the casing of the Black Stone (Hacerü’l-Esved), the Door of Repentance, and the swords of the prophet’s companions are on display.

Amongst the collection is the Mantle (or robe) of the Prophet Mohammed, two of the Prophet's swords, a seal and the Prophet's Holy Standard. There are also four pieces of stone and two of brick with the embedded footprint of the prophet and part of one of his teeth which was broken in the Battle of Uhud.

There are twenty swords preserved in the chambers of the sacred mantle, two of which are presumed to have belonged to the companions of the Prophet. Many o them were reworked in the Palace as c mark of respect for their original owners rendering them works of art, and include the swords of Cafer-i Tayyar. Halid bin Velid, Ammar bin Yasir, Ebu'l Hasene-the scribe of Muhammed, Davut, Ali, Osman, Omer and Ebubekir, which are displayed the chamber with a fountain together with one of the pouches made in. the Palace as a cover for the sacred swords.

During the Ottoman period, a number of early manuscripts, including 139 Korans, one of which was believed to have been in the hands of the Caliph Prophet Osman when he was martyred were kept in the sacred mantle chambers. Among the Korans once preserved here were those inscribed by important calligraphers, including Yakut, Ahmet Karahisari and Shah Mahmud Nişapuri, which are now kept together with the rest of the collection, in the museum library.

Another case in the Arzhan contains the golden cover that encased the stone of the Kaaba and two silver frame: also from Mecca. Thirty-two keys, two lock frames and three locks, one of which is in pieces, are also among the relics. The governor of the Hejaz sent the keys of the Kaaba to Istanbul after the Ottoman conquest of Egypt.

Subsequently, it became customary for keys and locks to be sent by the Ottomans to Mecca bearing the names and dates of each of the sultan and inscribed with quotations from the Koran and later returned. These were iron inlaid with gold and silver or of fin silver and bronze, and were made in the Palace at Istanbul for successive sultans. Among the finest in the collection are those of the Abbasid and Mameluke periods and others made for Ahmet II. Bayezid II. Suleyman I and Abdulaziz.

Here too, one may see the so-called Door of Repentance or Tövbe Kapısı, an iron inlaid door measuring 1.45 x 2.00 m, and golden and gilded silver rainwater spouts taken from the Ka'ba after restoration. The spouts bear the date 1612 and the name of Ahmet I, and measure 2.75 m in length, 25 cm in width and 31 cm in height.

In the same case preserved one of the letters presumably sent by the Prophet to the monarchs of Egypt and Persia, and to the Byzantine emperor, inviting them to convert to Islam It is inscribed in black ink on brownish parchment and flanks a seal thought t have belonged to the Prophet, which was found in Baghdad in the 19th century an brought to Topkapi Palace, where it was preserved in an oval box.

These scripts and photographs are registered under © Copyright 2017, respected writers and photographers from the internet. All Rights Reserved.
Posted by ISTANBUL, Extended On Two Continents at 9:17 AM