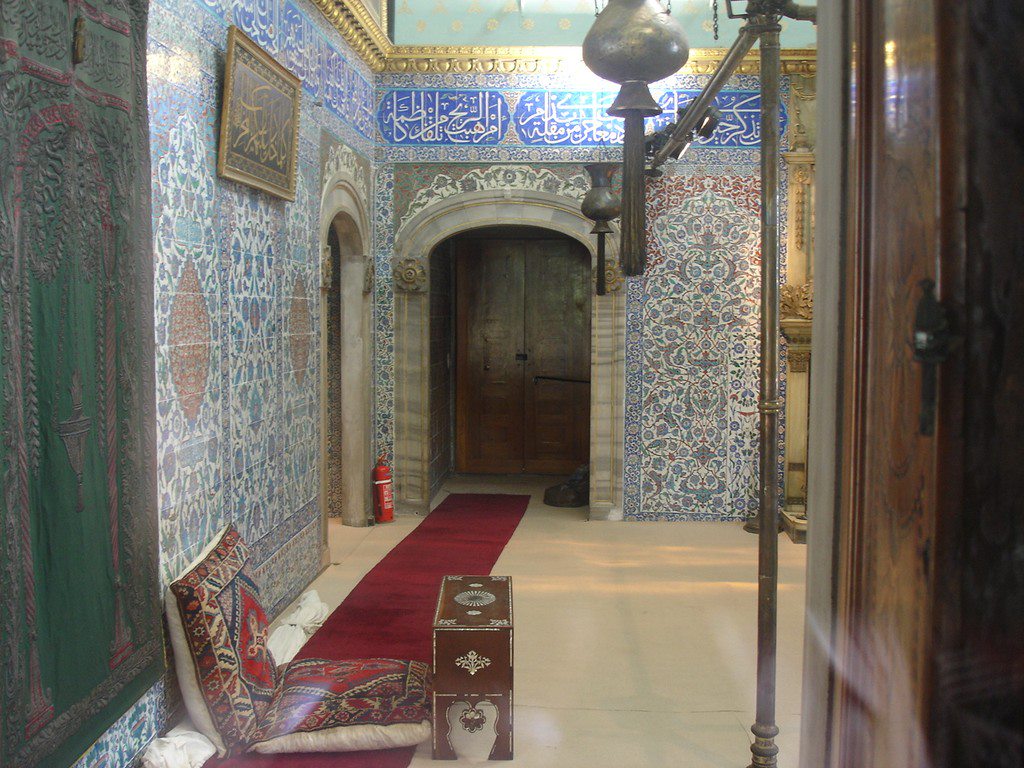 The Privy Room (Has Oda) was constructed in the Inner Courtyard in the time of Sultan Mehmed II (r. 1451-81) to serve as the private apartments of the sultan, for which purpose it was used until the middle of the 16th century. Prior to their accession to the throne, the sultans would come to this room to pray and receive homage from the Privy Room officials before leaving for the ceremony.

The Privy Chamber (Has Oda) also known as the Chamber of the Mantle of Felicity (Hırka-I Saadet Dairesi)  was built under Sultan Mehmet the Conqueror (1451-1481) in the Enderûn Courtyard as private mansion for the Ottoman Sultans.

It is a two-storey typical palace pavilion with a quad space (four-section) layout. The double space room at the entrance is called the Hall with the Fountain (Şadırvanlı Sofa) due to the marble fountain located under its dome. The other two parts of the four-section venue consist of two domed rooms connected through doors to each other and to the Fountain Hall.

The entrance to the Privy Chamber underwent various modifications under Sultan Ahmet III (1703-1730). The Kelime-i Tevhid (The Word of Unity: Islamic declaration of faith in the oneness of God) dated 1725, written in Celî Sülüs characters (a style of Arabic script with large letters used in writing inscriptions) was the work of Sultan Ahmet III who was a skilled calligrapher.

On both sides of the door we see two more inscriptions in monogram form. On the right side takes place the phrase, “Cihan Meliki Hakan-ı Emced”: “Glorious Khan Sovereign of the Universe” and the sentence on the left side reads, “Şeriat Sâliki Sultan Ahmed”: “Sultan Ahmed Devotee of the Shari’ a” (Islamic canon law).

The first room on the right side after entering through the Fountain Hall is the Arzhane – (Presentations Room) where the Sultan received the Arz Ağaları (the Squires in charge of submissions and/or presentations) and accepted their submissions. The second room located on the corner is the most important section of the building, namely, the Throne Room (Taht Odası) or the actual Privy Chamber (Has Oda).

Yavuz Sultan Selim designated this room for the conservation and protection of the Holy Mantle or Mantle of Felicity (Hırka-i Saadet) - believed to have been worn by the Prophet Mahomet -  he brought back from his Egyptian expedition and ordered significant changes in the organization of the Privy Chamber.  Sultans, who were staying here until the second half of the 16th Century, continued traditionally until the end of the empire, to sit in this room before the ceremony of accession to the throne.

They paid visit to the “Mantle of Felicity” each year, on the 14th and 15th day of the month of Ramadan, within the framework of an official ceremony.  The Privy Chamber was maintained and restored with great care by all successive Sultans out of respect for the sacred relics sheltered therein. Each sultan in his time attached great importance to keeping the place in prime condition. The Privy Chamber has the most originally designed tiles among Sultans’ pavilions, dating from the end of the 16th Century and which fortunately survived up until our present-day.

One enters the chambers through the fountain portal or Şadırvan Kapısı - from the Privy Court - or Enderun. An inscription over the portal bears the monogram of Ahmet III and alongside it is inscribed the proclamation of Unicity. Other inscriptions also bearing monograms flank the portal on either side, where one may see decorative tile panels dating from a later restoration.

Left of the entrance, one encounters the facade of the barracks of the Privy Chamber Guards, while just before that lies a well into which the refuse that was swept out of the Chambers of the Relics was dumped. It was also where the marble slab atop which the corpses of deceased sultans were placed for ritual washing before burial was stored. Through the portal one passes first into a porch-like room with a fountain and raised dais area.

This rectangular chamber was used by the chamber guards as a prayer room, whereby it was customary for them to perform ritual ablutions at the fountain and pray on the raised dais. Beyond the Chamber with a Fountain, one encounters on the left side a room known as the Kerchief Chamber or Dest-i Mal Odası. This is a small room decorated with tilework and it dates from the reign of Sultan Murat IV, where kerchiefs given to pilgrims to the sacred relics were kept and in later years printed.

On the right of the room with a fountain is the antechamber to the Chamber of the Sacred Relics, known as the "Petition Chamber" or Arzhane. Here pilgrims waited to be received into the presence of the relics through a fine, late-period door inlaid with mother-of pearl over which an inscription written in jali-thuluth Arabic script of salutation to God's Prophet, Muhammad. The inlaid door was the work of the master inlayer, Sedefkar Vasif.

The door opens into the Chamber of Sacred Relics, decorated with fine 16th century tilework, and in the far left corner stands the gilded silver coffered domicile baldachin set atop the relics. This structure supported on four pillars, was erected for Sultan Murat IV as a throne by the Court Jeweller, Zilli Mehmet, and with the addition of grills over two sides, by Sultan Mahmut II, transformed into an open casket for the sacred relics.

These scripts and photographs are registered under © Copyright 2017, respected writers and photographers from the internet. All Rights Reserved.
Posted by ISTANBUL, Extended On Two Continents at 9:11 AM