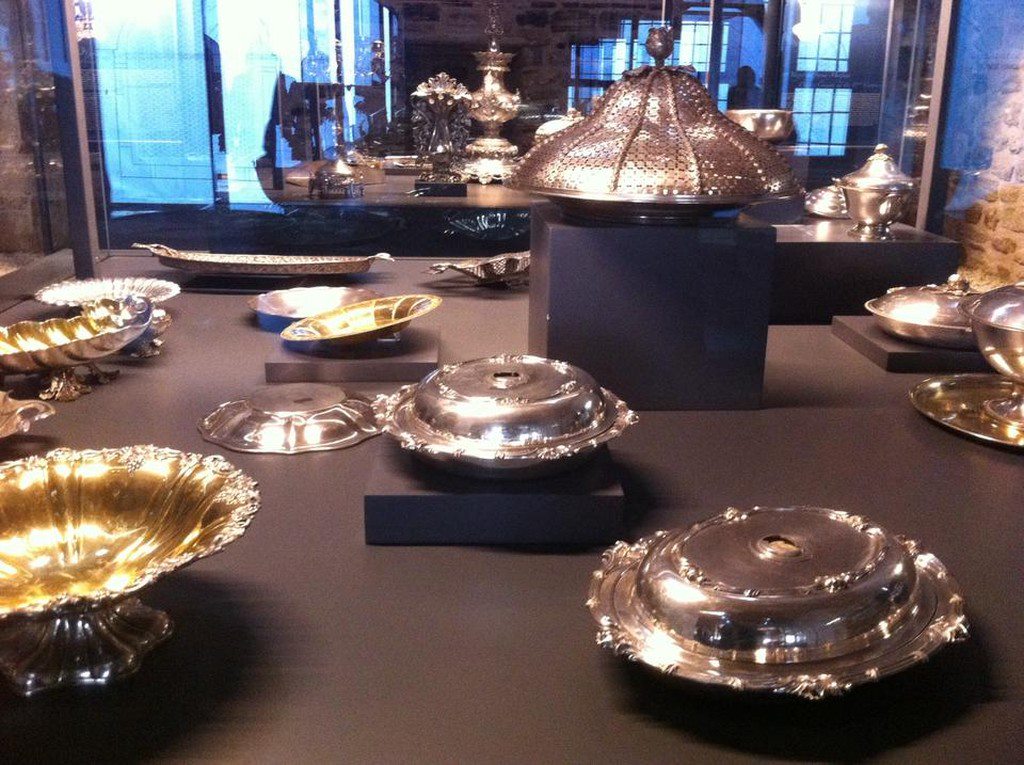 Glass And Porcelain Collection Of Istanbul

Throug a small entrance near the fireplace in the "Helvahane" we enter the room called "Reçelhane" in which mainly jams and marmalades were prepared. The red-coloured thick round stone seen in the middle of this room was used for this purpose. Today this part of the old kitchen features attractive porcelain and glass collections, all items of which were manufactured in Istanbul (18th - 19th centuries). The objects displayed are from the following Istanbul factories.

Artifacts from the Palace collection include pieces of mainly local (Istanbul) porcelain of the Ottoman period, and 19th century glassware. They are exhibited in what was once the Confectioners' Kitchen and Mosque, which was combined into one large hall between 1940-45. The glass and porcelain collection consists of nearly two thousand pieces acquired through various means, the porcelain mainly from Yildiz Palace.

It is known that glass was produced in the Ottoman capital from an early period, whereas we can identify the sites of glass workshops in Istanbul dating from the 16th century onwards. The earliest such workshops were located Ayvansaray and Balat on the Golden Horn, as well as in the Tekfur Sarayi vicinity. During the late Ottoman period, glass workshops were opened on the Asic shore of the Bosphorus in Beykoz Pasabahce, Cubuklu and Incirli.

Istanbul ware consequently tends to be referred as "Beykoz" ware. Glassware from imperial factories at Beykoz was awarded a medal at the London Exhibition of 18 and ware from the imperial factor) Incirli was displayed at the Paris Exhibition of 1855. According to museum records, a large quantity Beykoz ware, namely the filigree ware known as Çeşm-i Bülbül was purchased by the museum in 1884.

The great majority of the ware in the collection dates from the 19th century, and there are four main types; Çeşm-i Bülbül, a form of fine glass mosaic filigree ware similar to Venetian Latticino; opalines; colored ware; and clear glass and crystal. Rosewater sprinklers; including some in the form of birds and pistols are of particular interest. Tall, narrow tulip specimen vases dominate the collection. Other objects of note include bowls and ewers, decanters and iceboxes.

An unusual group of Meerschaum biscuit ware, some of which are glazed yellowish-brown and gilded, and a few pieces glazed black and inlaid with silver are also notable. Known as Tophane ware, these artifacts, mainly coffee-cups, trays, writing sets, pipes, hookah bowls, coffee jars and sugar bowls were the products of workshops located on Lüleci Hendek Street in Tophane, Istanbul. The finest examples date from the 19th century. At the peak of production there were nearly 60 operating workshops in Tophane, the last of which closed down in 1928. Most ware of this kind are signed and some are dated.

This factory was named after the area in which it was situated at Tophane, a district in Istanbul. It produced ochre pieces such as ink boxes, cigarette holders, coffee cups and others. These are in black, brown and ochre colours, and in addition are decorated with bronze-covered gold or gold foil. The work of the Tophane factory is influenced by traditional Turkish arts and crafts.

Towards the end of the 19th century the factory in Beykoz ceased its proudction. As a result, Sultan Abdülhamit II had a new porcelain factory established in the garden of Yıldız Palace. The Topkapı Palace collection has very beautiful pieces from this factory : vases and plates with flower and landscape motifs, and coffee and tea services featuring portraits of the Sultans can be seen amongst others. Some of the items have monograms of Sultan Abdülhamit II's "tuğra", and others have the Turkish crescent and star; dates are often included. Both the Beykoz and Yıldız products were designed predominantly for court use.

A relatively small display of European glassware is shown in the silverware gallery. Being fragile, comparatively little of this ware has survived. Among the more important pieces are two 'latticino' lamps, which must have been among the many artifacts ordered from the glass workshops of Venice from the 16th century onwards.

Similar ware dating from the 16th-18th centuries to be found in the collection includes dessert jars, perfume vials, decanters and glasses, which were among the artifacts presented to the court over the centuries. A certain amount of 'miscellaneous' ware is also on exhibit, floral decorated vases, mirror handles and paperweights in particular.

A particularly important group of glassware for the collection is the Bohemian glassware, made in Czechoslovakia, which appeared on the Istanbul market after 1700 and was widely purchased thereafter. Its popularity was due to the fine, durable quality of the glass and the decorative workmanship of renowned -artists, and lasted throughout the 18th century, although with the arrival of Meissen porcelain on the world market after 1710, Bohemian glassware declined in quality.

Bohemian crystal of the 18th century is well represented in both palace and private collections in Turkey. Among the colored crystal ware of the period are decanters, dessert jars and glasses. Bowls and ewers of green crystal that were made especially for the Palace are particularly notable. Water samovars and glasses presented as gifts to Sultan Abdulhamit II (in the late, 19th century) the products of the Moser factory in Carlsbad, Austria are also of interest.

They bear the monogram of the sultan decorated in enamel. Also among the Sultan Abdulhamit gifts were fine gilded and enamelled vases presented by the Lobmeyr family, glassmakers to the Viennese court, which attest to the importance of Bohemian glassware even at that late period. A set of green Russian glasses, also of interest, was presented by Czar Alexander III ( 1881-94) and bears his seal. Examples of European, French, English and Irish crystals are also to be found in the collection.

Copper works, an important part of Topkapı Palaces kitchenware, are exhibited in the Confectionery House (Helvahane) in the palaces kitchens, where sweets such as halva, candies, the gumlike candy called macun, baklava, as well as many other confections, and soap, were produced for the use of the palace residents.

All of the pots used to cook food in the palace kitchens are made entirely of copper. These pots are quite big, since they were used to serve all those resident in the palace; this would amount to food for at least five thousand people per day, and even more on special occasions.

Tombac ware is an important group within the palaces kitchenware. Tombac, obtained by applying a gold and mercury alloy to copper so as to produce a golden hue, was first used in Ottoman culture in the 16th century, but did not achieve widespread use until the 17th century.

Collection Of European Silverware
This collection is housed opposite the palace kitchens, and since the beginning of 1984 has been displayed on two floors. On the ground floor there is a small section for the collection of silverware which displays a small part of the 3,000 pieces in the collection. They are fine and attractive pieces, showing the skill and craftsmanship of the palace silversmiths, there are also gifts which were given to the Sultans by their own subjects within the Ottoman Empire, as well as  gifts from other countries (mainly in Europe).

An important part of the collection is the gifts presented to Sultan Abdülhamit II for the 25th anniversary celebration of his accession to the throne. These are models of various prominent buildings. On the first floor an interesting European porcelain collection dating from the 18th and 19th centuries can be seen. This consists of selected smaples of Limoges, Vincennes, Sevres, Augarten, Meissen and Petersburg porcelain. The porcelain displayed here forms a small part of the overall collection of about 5,000 pieces. Almost all pieces are gifts given to the sultans from various European countries.

The palace collection, which is composed of nearly 3,500 pieces, includes artifacts brought to Topkapı from Yıldız Palace during the Republic as well as the silverware kept in Topkapı during Ottoman times. After being displayed in various parts of the Palace, the collection was moved to the present site in the dormitories of the cooks, confectioners and table stewards attached to the Palace kitchens below the European Porcelain rooms, which were all restored prior to opening on April 4th, 1984.

The collection contains no pieces earlier than the 16th century, as some silver artifacts were melted down at a time when the imperial coffers lacked funds. Most of the remaining pieces were made by the court silversmith and are all marked "900 ayar sah" (90% pure sterling silver) and with the monogram of the relevant sultan. The artifacts are decorated with inlay, repousse, niello and latticework and gilded over the interior and decorative motifs.

The earliest artifact in the collection is a silver coffee salver bearing the monogram of Sultan Süleyman I (1520- 1566), and a small bowl, both engraved with hatai and rumi motifs of Far Eastern origin. The two artifacts belong to a key period in the minor arts of the Ottomans, and it was from the first half of the 16th century onwards that we find the typical characteristics of Ottoman metalwork emerging. Silver bowls and ewers bearing the classical Ottoman decorative motifs reflect the taste of successive periods in form also.

One ewer bearing the monogram of Sultan Ahmet III (1703-1730) is noticeably unadorned with motifs, while an Sultan Abdülmecit (1839-61) bowl and ewer set bears the carnation motif typical of the period, and a monogrammed set of the Sultan Mahmut II period ( 1808-1839) is distinguished by the imperial arms worked in high relief. Ewer and bowl sets were often accompanied by a soap dish.

The significance of the coffee ceremony in Ottoman society is plain from the number of silver, gilded and porcelain coffee sets found in the Ottoman palaces. The coffee samovar rested on a small silver brazier filled with hot ashes, and generally constituted a set, both artifacts bearing identical motifs. Coffee cup holders were among the implements of the coffee ritual, and silverware of this kind were worked in niello and filigree, inlaid and encrusted with precious stones.

Porcelain cups were placed in their holders, which were brought before guests on a tray complete with the coffee ewer and brazier and covered sugar bowls. Incense holders and rosewater sprinklers were also a part of the paraphernalia of the ceremony. Other artifacts include tiny silver pipe braziers in which charcoal was burnt to light the long-stemmed hookahs, or water pipes, also part of the coffee ritual. These braziers were lidded and highly decorative. The pipe itself rested on a silver plate, a rimmed object in latticework.

One of the finest sets of ceremonial paraphernalia as described is currently displayed in Topkapı, alongside other ceremonial and everyday palace silverware. One of the more interesting types of vessels are silver asure jugs, (others in porcelain and crystal are also to be found). These were pear-shaped vessels with lidded beak-like spouts and lugs, decorated with high relief (repousse) and chased motifs, which were used to pour sweet broth known as asure, which was cooked in great quantities in the Palace on the 15th day of the month of Muharrem.

The jugs in the collection reflect rococo influence. Other artifacts include large round dining trays, silver tureens with large floral finials on the lid, and sweetmeat and tea sets, all of which were used as regular tableware as well as during court ceremonies, and silver mirrors, candlesticks, and writing caskets.

Gifts presented to Sultan Abdülhamit II (1876-1909) to celebrate his 25th year as Sultan make up a group in themselves, among which the large encrusted vases and models are particularly interesting. Other diplomatic gifts presented to the throne include European and Russian silverware, dinner and tea sets and candlesticks in particular.

These scripts and photographs are registered under © Copyright 2017, respected writers and photographers from the internet. All Rights Reserved.
Posted by ISTANBUL, Extended On Two Continents at 6:45 AM