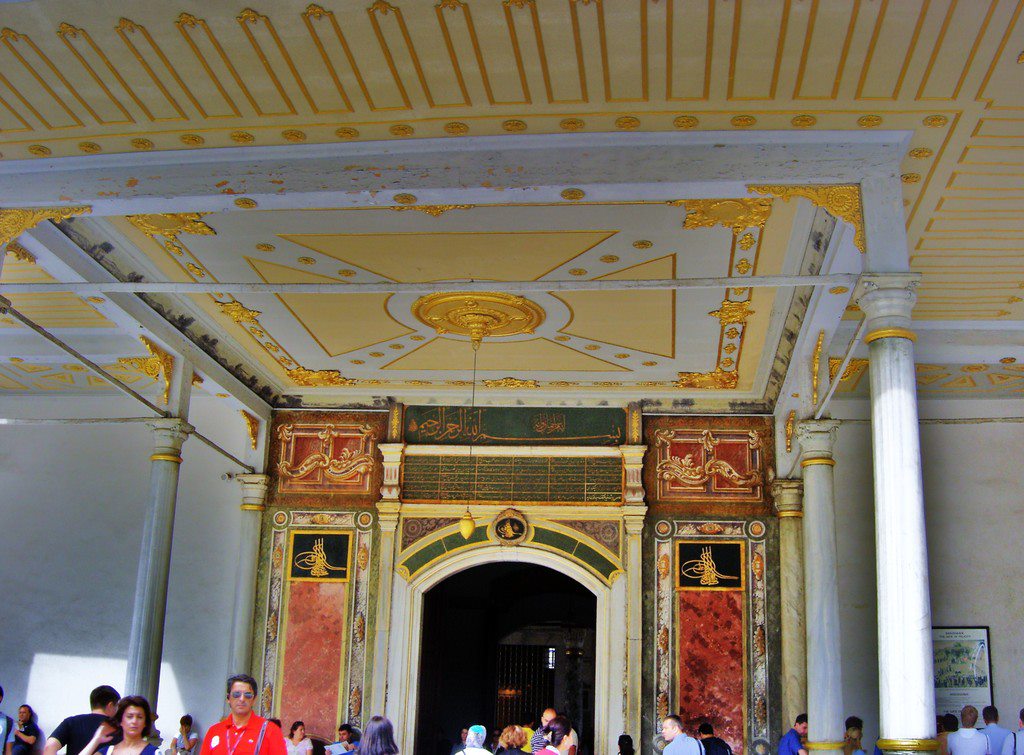 The Gate of Felicity (Bâbüssaâde or Bab-üs Saadet) is the entrance into the Inner Court (Enderûn), also known as the Third Courtyard, marking the border to the Outer Court or Birun. The Third Courtyard comprises the private and residential areas of the palace. The gate has a dome supported by lean marble pillars. It represents the presence of the Sultan in the palace. No one could pass this gate without the authority of the Sultan. Even the Grand Vizier was only granted authorisation on specified days and under specified conditions.

The gate was probably constructed under Sultan Mehmed II in the 15th century. It was redecorated in the rococo style in 1774 under Sultan Mustafa III and during the reign of Sultan Mahmud II. The gate is further decorated with Qur'anic verses above the entrance and tuğras. The ceiling is partly painted and gold-leafed, with a golden ball hanging from the middle. The sides with baroque decorative elements and miniature paintings of landscapes.

The Sultan used this gate and the Divan Meydanı square only for special ceremonies. The Sultan sat before the gate on his Bayram throne on religious, festive days and accession, when the subjects and officials perform their homage standing. The funerals of the Sultan were also conducted in front of the gate. On either side of this colonnaded passage, under control of the Chief Eunuch of the Sultan’s Harem (called the Bâbüssaâde Ağası) and the staff under him, were the quarters of the eunuchs as well as the small and large rooms of the palace school.

The small, indented stone on the ground in front of the gate marks the place where the banner of Muhammad was unfurled. The Grand Vizier or the commander going to war was entrusted with this banner in a solemn ceremony.

The Kapı Agha (Turkish: Kapı ağası, "Agha of the Gate"), formally called the Agha of the Gate of Felicity (Bâbüssaâde ağası), was the head of the eunuch servants of the Ottoman Seraglio until the late 16th century, when this post was taken over by the Kızlar Agha. In juxtaposition with the latter office, also known as the Chief Black Eunuch as its holders were drawn from Black African slaves, the Kapı Agha is also known as the Chief White Eunuch.

As his title implies, the Kapı Agha was in charge of the Gate of Felicity that separated the Outer Court (Birûn), where state affairs were conducted, from the Inner Court (Enderûn) and the Sultan's private apartments in the Topkapi Palace. The Agha occupied an office to the right of the gate and was responsible for controlling entrance to the Inner Court and for transmitting the Sultan's orders to his officials, rendering him, in the words of the Ottomanist Halil İnalcık "the sole mediator between the Sultan and the world outside the Palace".

Among the duties of the Kapı Agha and his white eunuchs was also the running of the Palace School for the pages of the palace, whose graduates then went on to provide the administrative elite of the Empire. The "Mosque of the Aghas" (Ağalar Camii) in the Topkapi Palace was built for use by the Kapı Agha and his eunuchs. The Kapı Agha consequently was an influential post, a close adviser to the Sultan and able to play a decisive role in the imperial succession. Its holders bore the rank of vizier and came in precedence only after the Grand Vizier and the Shaykh al-Islam.

At his heyday in the 15th and 16th centuries, the Kapı Agha rivalled the Grand Vizier for importance. Nevertheless, and in contrast to his analogues in other Islamic states, usually denoted by variants of the title hajib, the holders of the office never expanded their power to the extent that they could rival the Sultan's own.

Unlike their counterparts, the Kapı Ağası controlled neither the administrative apparatus, which remained firmly in the hands of the Grand Vizier, nor the palace troops, which were commanded by another official, the Agha of the Janissaries, who notably also received about five times the Kapı Ağası's daily salary of 100 akçes. Nevertheless, many Kapı Ağası went on to assume major provincial governorships (often distinguished by the epithet hadım, "eunuch", in their subsequent careers), and several are considered as among the greatest Ottoman statesmen of the period.

The post reached its height in the reign of Sultan Süleyman the Magnificent (1520–1566), when its holders became the steward of the charitable foundations and endowments (vakifs) designated for the upkeep of the two holy cities (Haramayn) of Islam, Mecca and Medina, and of over seventy large mosques. During this time, the holders of the office engaged in open rivalry with the Grand Viziers for control over state affairs.

Soon after, however, through the influence of the women of the Imperial Harem, the Kapı Ağası was eclipsed by the Kizlar Agha, who supervised the Harem. The Kizlar Agha became independent of the Kapı Ağası in 1587, assumed the control of the Haramayn and quickly rose to become the senior palace official. The final blow to the authority of the office came in 1704, when its remaining powers were transferred to the Silahdar Agha. The position of the Kapi Agha survived, but thereafter was devoid of any significance.

Beyond the Gate of Felicity is the Third Courtyard (III. Avlu), also called the Inner Palace (Enderun Avlusu), which is the heart of the palace, where the sultan spent his days outside the harem. It is a lush garden surrounded by the Hall of the Privy Chamber (Has Oda) occupied by the palace officials, the treasury (which contains some of the most important treasures of the Ottoman age, including the Ottoman miniatures, the Sacred Trusts), the Harem and some pavilions, with the library of Sultan Ahmed III in the center. Entry to the Third Courtyard was strictly regulated and off-limits to outsiders.

The Third Courtyard is surrounded by the quarters of the Ağas (pages), boys in the service of the sultan. They were taught the arts, such as music, painting and calligraphy. The best could become Has Odalı Ağa (Keepers of the Holy Relics of Muhammad and personal servants of the Sultan), or even become officers or high-ranking officials.

The layout of the Third Courtyard was established by Sultan Mehmed II. Its size is roughly comparable to the Second Courtyard. The rigid layout did not allow for any great changes. While Sultan Mehmed II would not sleep in the harem, successive sultans after him became more secluded and moved to the more intimate Fourth Courtyard and the harem section. The Hünername miniature from 1584 shows the Third Courtyard and the surrounding outer gardens as it must have appeared following its completion under Sultan Mehmed II. It also shows at the bottom the sultan in what looks like a shore pavilion either holding audience or being entertained by courtiers.

These scripts and photographs are registered under © Copyright 2017, respected writers and photographers from the internet. All Rights Reserved.
Posted by ISTANBUL, Extended On Two Continents at 4:29 AM