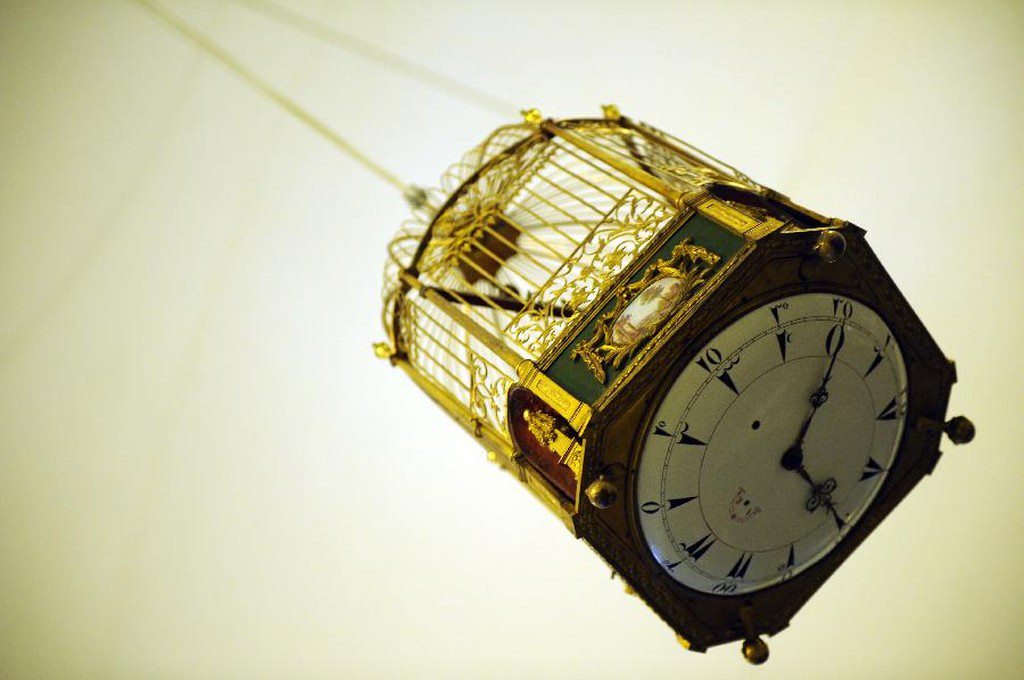 Next to the Chamber of Sacred Relics, there is the exhibition of Clock Section (Silahtar Treasury) Clock Collection. The permanent exhibition in the palace’s Inkwell Chamber with 380 mechanical clock collection on display at Second Courtyard..

Watches and clocks used by Turkish Sultans in one part of the palace or another from the 16th through the 19th-century, including pocket watches, wall and table clocks, are at present exhibited in the Silahtar Treasury. Some of these watches were purchased privately by the Sultans, while others were royal gifts to Turkey’s monarchs, or were acquired through other channels.

The Clocks are shown in what was originally the Old Silahtar Treasury. There are some 350 clocks in the collection, acquired by the palace as diplomatic gifts or by purchase. Nearly 200 clocks are on display, and include those of Turkish, German, Austrian, English, French, Swiss and Russian origin.

The earliest Turkish clocks are dated to the 17th century and are fine examples of the craftsmanship of the period. Although we know that clocks were made in and around the Ottoman capital during the 15th and 16th centuries, these four clocks, the work of craftsmen named Bulugat, Sahin, Abdurrahman and Mustafa Aksarayi are the earliest surviving examples we have in the collection. The silver, horizontal movement table clock of Mustafa Aksarayi and Şahin Usta's clock cases are among the finest artefacts of the period.

The late 17th century Şeyh Dede pocket watch elliptical fob (sash) watch calender is one of the finest of its type, 18th century Turkish clocks were influenced by English time-pieces in form, as we see in the work of the master craftsmen Zihni, Edirneli Ibrahim and Osman. The collection also possesses the only signed Zemberekcioglu clock from that century.

Ahmet Eflaki Dede was sent to Paris by the court in the 19th century to learn new skills in clockmaking. We have only one of his clocks in the collection, but there are a number of time-pieces made by his student followers Mehmed Şükrü, Hüseyin Hakki and Süleyman Leziz, who were among the leading craftsmen of their time.

Skeleton clocks are in the majority among the Turkish 19th century time- pieces, while Ismet Usta, who worked at the court of Sultan Abdulhamid I, produced pedestal clocks of the English type. The jointly-made walnut consol (bracket) clock dating to the reign of Sultan Abdulhamid II is a fine example of the woodwork and inlay of the period.

The oldest German time-piece in the collection is a pendant watch dating to the 16th century. The collection also boasts a Renaissance wall clock, roughly contemporary, which was made in one of the southern European cities. The musical organ chime bracket clock in the imperial hall is an 18th century time-piece made mid-century by Kintzing at Neuwied. Two other time-pieces of German origin are a wall clock and regulator and a pocket watch presented to sultan Sultan Abdulhamid II by the Emperor Wilhelm II. The latest piece in the collection is a Black Forest wall clock.

The collection contains a number of clocks dating from the 18th century onwards, although it is known that the Emperor Rudolph II sent an automatic movement time-piece to the palace during the reign of Sultan Murad III. The earliest existing piece, however, dates from about 1720, a table clock with gold encrusted case made by Joseph Dershinger. 19th century pieces include a miniature table clock encased in encrusted silver, made in Vienna, and a carriage clock inscribed Andreas Hochenadel, also from Vienna. Two other interesting pieces are a musical table clock and a laterna chime Kurz waIl clock, also from Austria.

One of the most notable is a colossal long case organ musical and chiming clock in an inlayed case (inlayed with mother-of- pearl). Two Markwich-Markham Borrel musical pedestal clocks (a pair) are among the most striking pieces in the collection, their cases inlayed with silver and encrusted with precious stones. Among the 19th century clocks in the collection are some made by the sons of those master craftsmen.

French time-pieces were imported to the Ottoman court from the time of Süleyman I onwards, although the earliest piece in the collection dates from the 17th century and is a fob watch signed De Baufre, made in Paris and dated 1675. Pocket and fob watches by Jullian Le Roy, dated to the 18th century with enamel inlay and encrusted cases are particularly interesting. Neuchatel organ musical and chiming pedestal clocks made for the Ottoman court after the 18th century are also of interest.

A whole case is devoted to the display of Breguet pocket watches, made in Geneva, the cases of which are encrusted and enamelled and bear painted views of the Bosphorus. The collection also boasts one of the seven pendule sympathique clocks made by Breguet for the palaces of Europe. This particular clock was presented to Sultan Mahmud II by Napoleon, and is encased in an encrusted case bearing scenes of the Bosphorus and the Golden Horn. Also in the collection is a group of neo-gothic table clocks.

Russian clocks
The most notable of the Russian clocks in the collection is the griffon shaped table clock signed Faberge, a present from the Czar Nicholas II to Sultan Abdülhamid II in 1901.

Swiss Clocks and Watches
These date from the 19th century onwards, when Swiss time-pieces began to supercede English clocks and watches. The collection baoasts pocket watches made for the palace, at Chaux de -Fonds by the Courvoisier Freres and Courvoisier et- Cie. Among them are two bearing the portraits of Sultan Abdülaziz I and Sultan Abdülmecid on the cases.

There are also a number of enamelled watches from Geneva and a pair of musical cage clocks made by Pierre I. Droz and son (H.L.Droz) at La Chaux de Fonds. Two curious time-pieces in the form of a pistol and spectacles made by the Rochat brothers at Geneva are also to be found in the collection.

These scripts and photographs are registered under © Copyright 2017, respected writers and photographers from the internet. All Rights Reserved.
Posted by ISTANBUL, Extended On Two Continents at 7:00 AM