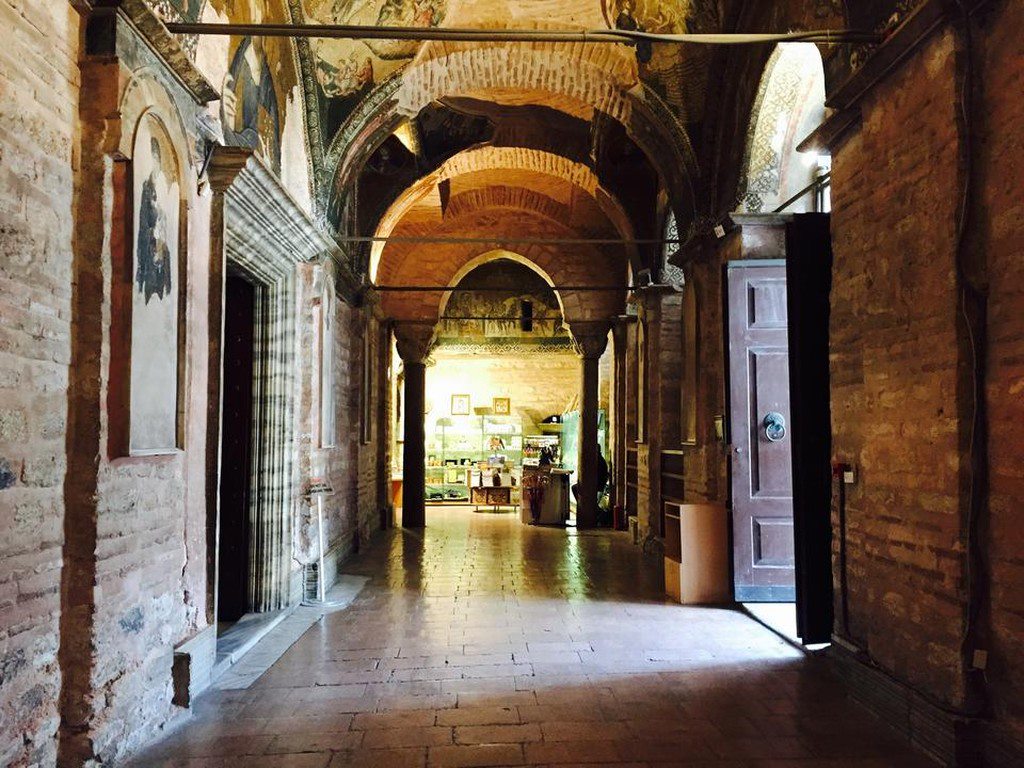 The Chora consists of five main architectural units, namely the naos, the two-storied structure (annex) added to the north, the inner and the outer narthexes and the chapel for tombs (parecclesion) to the south.

The main structure of the existing church is a building on an athropied Greek cross plan covered by a dome. The dome is a ciborium-shaped high frame supported by four columns. 16 long windows provide lots of daylight to the interior. On each side of the bema, the eastern extension of the naos, were domed chambers called pastophoria. The chamber to the north (prothesis) directly opens to the bema, whereas the chamber to the south (diaconicon) had opened to the bema, but after the renovations in the 14th century, it was covered with marble and opened to the parecclesion.

South to the naos is a passageway linking the naos to the parecclesion. The additional building (annex) adjacent to the north side of the naos is two-storied, and most probably, the lower story was housing the treasury (Skeuophylakion) and the upper story the library of Metochites. The units south and north to the inner narthex located west of the naos are covered with domes, whereas other units are covered with vaults. The section in the southwest of the outer narthex, where the bell tower was located earlier, houses the minaret today.

The main room of the church (naos) has a size of 10.5 m x 15 m. The apse is supported with an outer semi-circular flying buttress constructed in the Palaiologan period. The main room’s floor and walls are covered with marble. Inside the apse is the mihrab made in the Ottoman period. Stained glass pieces discovered during archaeological excavations at the apse section resemble those in the Monastery Church of Christ Pantocrator, and this is quite important because it indicates that the art of stained glass had been developed earlier in the Byzantine Empire than it had been done in Europe. The walls of the naos are decorated with valuable marble plates up to the cornice level, the narthexes are entirely decorated with mosaics, and the Parecclesion is decorated with frescoes.

The parecclesion adjacent to the south side of the naos was entirely built in the 14th century. This structure, which was built by Metochites as his own tomb chapel, included the tombs of Metochites, the founder of the monastery, and some people close to him. This elongated rectangular and single-nave structure has a size of 15.96 m x 4.96 m. The parecclesion is separated from the outer narthex by two columns that have capitals decorated with winged angels, crosses and acanthus leaves, and constitutes a whole independent from the narthex in terms of both architecture and function.

On the east side of this rectangular structure, which has a size of 4.33 m x 3.21 m, is a small, semicircular protruding apse. The central part of the parecclesion is covered with a dome. This dome is 4.7 m in diameter and 11.18 m in inner height. The dome structure with 12 ribs (dodecagonal) is supported by a relatively high trimmer and has 12 windows. The space, which had been formed because of the construction of the parecclesion in the 14th century, between the parecclesion and the naos, was utilized by adding two chambers on either sides of the hole connecting the naos and the parecclesion.

There are no frescoes or mosaics in these two chambers, which could have been utilized as storage rooms for liturgical articles or as small chapels (oratorium). Those chambers are thought to have been used to store materials such as candles, candelabras, incenses, icons and containers used during religious and memorial services carried out in the chapel.

There are totally eight tomb arcosolia in Chora; four in the parecclesion, one in the north wall of the inner narthex, and three in the west wall of the outer narthex. Those tombs belong to aristocratic families. Additionally, beneath the apse decoration of the parecclesion is another tomb dating from a later period.

Round arches, niches, stone walls with brick dog tooth eaves, and half-piers covering the facade of the building have provided a vivid outlook to the structure.

Important Renovations
After the appointment of Metochites in 1316 by the emperor as the "ktetor" (donor) to restore the Chora Monastery under the protection and direction of the palace, the restoration of the monastery was completed in 1321. The main dome of the church, the two-story additional building (Annex) adjacent to the north side, the inner and outer narthexes and the additional chapel to the south (parecclesion), furthermore the marble plates and mosaics of the naos, the mosaic decoration of narthexes and the frescoes of the additional chapel had almost their present-day appearances.

After these renovations undertaken in the 14th century, the chamber in the south (diaconicon), that had been opening into the bema, was closed with marble and began to open into the Parecclesion. After the earthquake of 1766, the main dome of the church that had collapsed was renovated by the architect İsmail Halife. During this renovation, the original 14th-century dome was replaced by a wooden dome covered with plaster.

In the reign of Sultan Abdülaziz, between 1875 and 1876, the mosaics were cleaned and uncovered by the Greek architect P. Kuppas and some changes were applied to the facade of the building. The fillings made by pouring stone chips between domes in order to cover the narthex with lead had adverse effects on the appearance of the building and increased the weight of the structure. In 1898, Sultan Abdülhamid II had the building, which had been damaged and the minaret of which had been destroyed by the earthquake of 1894, restored.

During the partial restoration undertaken in 1929, the Koimesis mosaic in the naos was cleaned and uncovered. During this restoration, some of the additions in the interior made during the Turkish period were removed and the minbar, which has reached the present day, was sent to the Zeyrek Mosque (Church of Christ Pantocrator). After 1948, the building was attached to the Administration of Museums.

Between 1947 and 1958, a comprehensive cleaning and restoration program was implemented under the leadership of Thomas Whittemore by the "Byzantine Institute of America" and the "Dumbarton Oaks Research Institute". The frescoes and mosaics displaying the characteristic features of the 14th century were uncovered and the building obtained its current appearance.

Marble Decorations
The word “marble”, which is known as “Marmaron” in Greek, was named after the Marmara Island (Prokonnessos) that was famous for its rich marble deposits. These white marbles with gray grains were extensively used for the decoration of the Chora. In addition to the marbles from the Marmara Island, porphyritic, ancient green, onyx, red, yellow and pink grained marbles brought from different places such as the North Africa, the island of Euboea (Eğriboz) and the Afyon province produced a rich outlook.

Marble blocks of the same sets were cut and mounted side by side in order to form patterns, rich symmetrical figures and motifs resembling wood grains. Although the marble works in Chora are as rich and striking as those in the Hagia Sophia are, they do not attract the attention of visitors that much, because of the rich mosaics and fascinating fresco pictures. Especially the naos and the wall coverings in the narthexes of Chora contain marble. Marble patterns in opus sectile were used in coverings and additionally in the friezes under the cornices on the naos walls.

Attentive observers are able to see the fine marble works in the frames of the tomb niches, in the marble intarsia cornices, in the yellow and dark colored reliefs on the capitals of the columns, and on the first door on the north side of the entrance to the naos.

The marble door in the north axis of the naos has lost its embossments like the door of heaven and hell in the southern gallery of the Hagia Sophia. It is an imitation of the bronze and wood doors of the 6th century, and one of the few surviving examples of its kind. The embossed yellow painted figures of pigeons, which drink water from bowls, on the upper frieze of the lintel on the main entrance door of the naos are of high-quality workmanship. On the frames on the two tombs in the parecclesion, the background is blue and the embossed sections are yellow.

The walls of the parecclesion are decorated with imitation marble frescoes. The omphalion in the south axis of the naos floor schematically resembles the omphalion in the Hagia Sophia. This section was supposedly used during ceremonies.

Mosaics And Frescos
Mosaics and frescoes were widely used decoration techniques of the Byzantine religious painting. In Chora as well, we are able to see those two decoration techniques together. The outer and inner narthexes are decorated with magnificent sequential scenes that could be considered among masterworks of mosaics, narrating mainly the life and miracles of Jesus Christ, and the life of Virgin Mary, respectively. On the other hand, in the parecclesion, religious stories from the Old Testament and scenes such as the judgment day, resurrection and last judgment are depicted in frescoes.

The mosaic art found by Egyptians was at first used as a flooring decoration. In the Hellenistic period, this art was developed by the introduction of glass mosaics. That kind of mosaic was called "psifidoton" in the Byzantine period. In the Early Christian period, the mosaics were created by laying small triangular, quadratic, cubic etc. pieces called "tesserae" and made of stones, glasses and seashells of various colors and almost flesh-colored tile pieces covered with gold and silver leafs on a wet, quick-drying plaster together.

This art, which was widely implemented in the 6th century for wall decoration, entered a period of stagnation in the 10th century, because of its complexity and since it was costlier than frescoes. However, in the 14th century, in the late Byzantine period, it revived, as seen in the Chora. That phenomenon is also an indicator of the extent of the socio-economic development of the Byzantine Empire after the Latin occupation (1261).

A very good example of the substitution of the art of fresco painting the mosaics in the Byzantine painting art since the later technique was expensive and difficult to implement, can be seen in the parecclesion of the Chora. In the period of Metochites, after the completion of the mosaic decorations in the naos and narthexes of the Chora, the decoration of the parecclesion was initiated, but here, mosaics were used nowhere with the exception of tomb niches, and all decorations were frescoes. Obviously, during the last phases of the renovation, the economic situation should have been worsened.

The fresco technique consists of painting in pigment dissolved in water by squeezing on wet plaster via a brush with stiff and long bristles. Thus, the pigments are absorbed by the wet plaster and the colors stay bright for a very long time. Thanks to both the painting technique implemented and the high-quality materials chosen for the parecclesion section of Chora, the brightness of the colors of the paintings have been preserved until today. The cliffs, trees, clothes stretched between buildings, and architectural elements aiming at providing depth to the paintings were implemented very successfully, and they have added three-dimensionality to the paintings.

After the conversion of the church into a mosque, all inscriptions, Christian symbols, all frescoes, and mosaic decorations were covered by a thin layer of dye and lime without destroying them. Thus, they have been able to survive without suffering any damage until today.

These scripts and photographs are registered under © Copyright 2017, respected writers and photographers from the internet. All Rights Reserved.
Posted by ISTANBUL, Extended On Two Continents at 8:41 AM