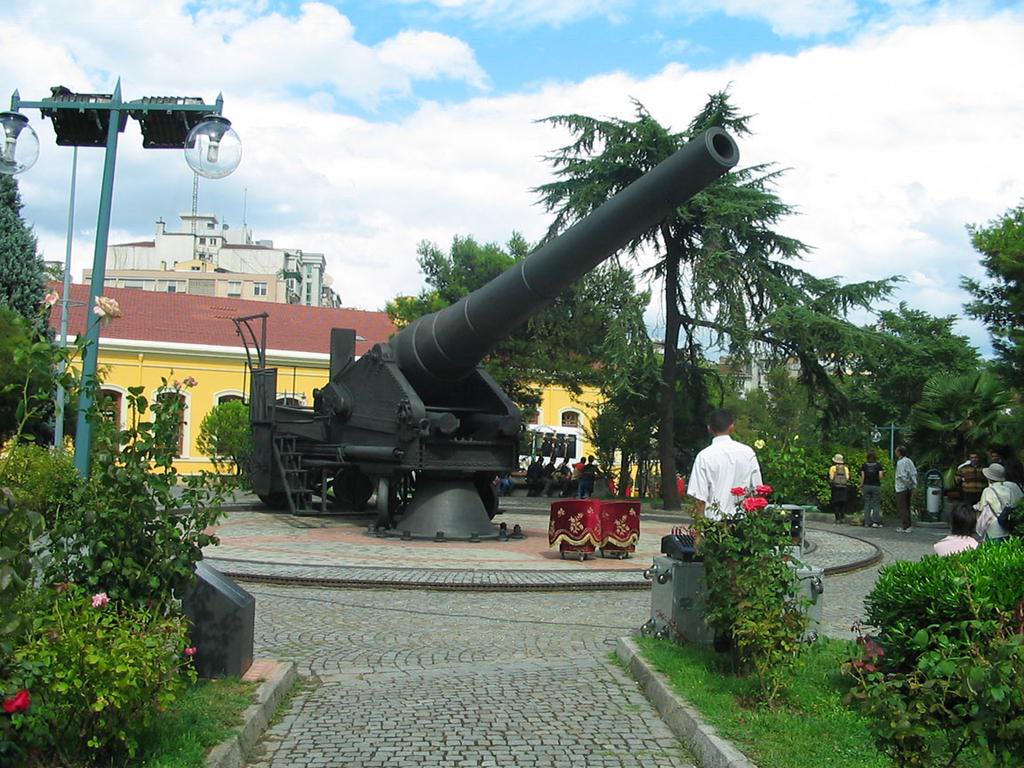 Istanbul Military Museum (Turkish: Askeri Müze) is dedicated to one thousand years of Turkish military history. It is one of the leading museums of its kind in the world. A fine collection of historical weapons, uniforms and tools of various periods of the army are on display. The highlights are the magnificent campaign tents and standards. Outside the museum, interesting Ottoman cannons and mortars, a rail gun, aircraft, helicopters are on display.

Military Museum and Cultural Center Command is a museum subordinate to the Military History and Strategic Studies Department, General Staff, deployed in Harbiye district of Istanbul. The Harbiye district, meaning “military”, derives its name from the service buildings of the Military Museum which were used by the Ottoman Empire in its later periods as the Military Academy; the founder of our Republic, The Great Leader Mustafa Kemal Atatürk also graduated from this school.

Military Museum and Cultural Center Command collects, classifies, maintains and renovates the works of art that can be regarded as cultural military assets, and stores and exhibits them using modern methods in order to hand them over to the future generations.

Military Museum and Cultural Center Command, where the historical artifacts from its collection are exhibited using modern museology techniques in its exhibition halls, presents our cultural wealth inherited from our glorious history to domestic and foreign researchers. Military Museum and Cultural Center Command has approximately 55.000 objects in its inventory, 5.000 of which are displayed in the museum's exhibition halls.

Communications and computer technologies are used with a view to visually convey the Turkish history to contemporary generation and to create a permanent impression in the minds of the young. The "Janissary Band" Multi-vision introducing the Janissary Band, Dardanelles Diorama depicting the Battles of Dardanelles and touch-screen computer systems can be regarded as examples of such applications.

Mehteran company, the oldest band in the world, contributes to the promotion of our country through its concerts throughout the country and abroad. The performances by “Mehteran Company” can be watched in two separate sessions from 15:00 to 16:00 in days the museum is open.

After the conquest of Istanbul by Sultan Mehmed II (1432-1481) in 1453, the Saint Irene Church was turned into an armory. The building was restored by Sultan Ahmed III (1673-1736) and the arms were arranged in a regular manner in 1726. In doing so, it laid the foundation for the Military Museum.

After regulations made by Sultan Ahmed III, the inscription, “Daru’l Esliha” (Ammunition), was put on the entrance door of the building. It was looted by the Cebecis (armourers) during the deposition of Sultan Selim III (1789-1807) in 1807.

After the abolition of the Janissary Corps (Yeniçeri Ocağı), many historical items held by the Museum belonging to the janissaries were demolished during the unrest. After all these events, the building gradually lost its previous significance and was turned into a storage facility for military affairs and was used as an armory later.

Afterwards, when items were collected from the Saint Irene Church by the Armory Marshal Ahmed Fethi Paşa, the museum was opened in 1846 and in the literal sense, it was the first modern museum building consisting of two sections called Mecma-i Esliha and Mecma-i Asar-ı Atika.

Unfortunately, it was again turned into an armory during the reign of Sultan Abdülaziz (1861-1876). The materials exhibited in the Mecma-i Esliha section during that time make up the core collection of the current museum. These include, army materials such as guns, axes, swords, helmets, and army scales. On the other hand, the materials in the section of Mecma-i Asar-ı Atika were added to the collection of the Archeology Museum, including many items, such as mummies brought from Egypt, tiling works, inscriptions, and sarcophaguses.

After the proclamation of the Second Constitutional Monarchy regime in 1908, the museum coordinating committee was formed by the personal initiative of the Armory Marshal, Ali Rıza Paşa, under the leadership of Ferik Ahmed Muhtar Paşa, the Minister of the Military School of Engineering (Mühendishane-i Berri-i Hümayun). This commitee worked to gather objects scattered throughout the empire worthy for a museum.

As a result of these activities, many historical objects were gathered at the Saint Irene Church, and it was opened as a museum called the Ottoman Military Museum (Müze-i Askeri-i Osmani). Concerts were periodically performed by the Janissarry Band. For security reasons during Second World War, objects at the Saint Irene Church were transferred to Niğde, a central Anatolian city in Turkey. After the Second World War, the collection, which consisted of roughly 7,000 objects, was transferred from Niğde to Maçka Arsenal (Maçka Silahhanesi).

The building was handed over to Istanbul Technical University, and the objects in the Maçka Arsenal were moved to the former Harbiye Gym in 1955. During this time, restoration works began on the building. A section of the Military Museum was given a new face by a project prepared by the architect Nezih Elden. In 1967, the museum was partially opened, but it was not until 1993 when it was completely opened to the public.

These scripts and photographs are registered under © Copyright 2017, respected writers and photographers from the internet. All Rights Reserved.
Posted by ISTANBUL, Extended On Two Continents at 12:57 PM