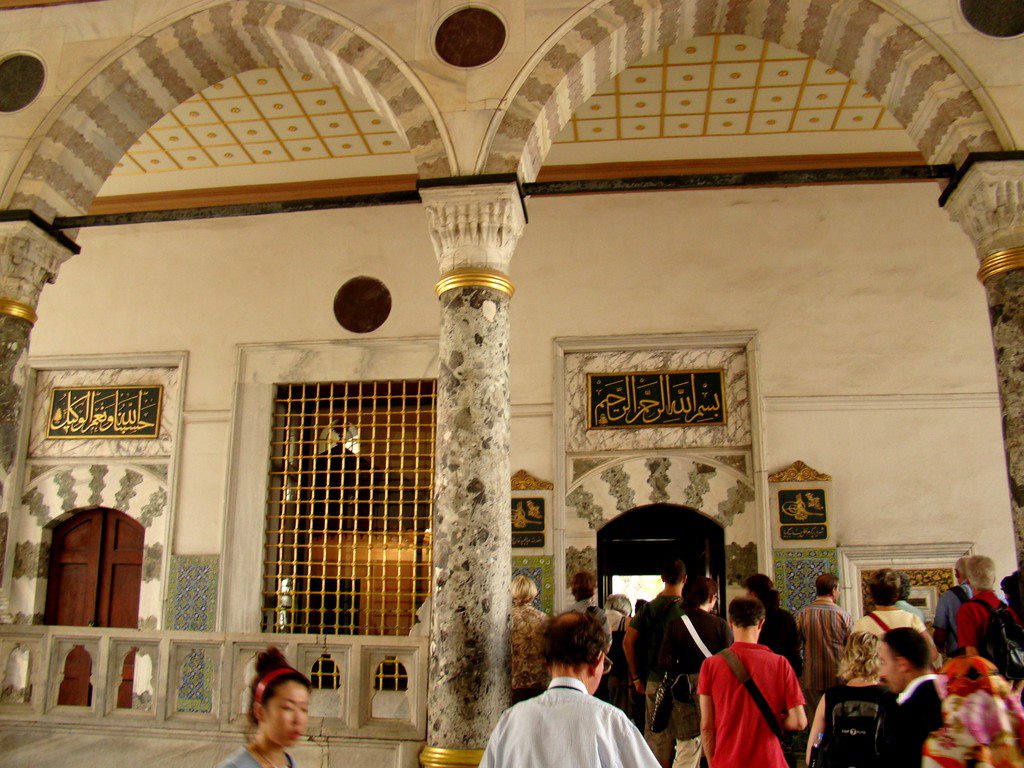 The Audience Chamber, also known as Audience Hall or Chamber of Petitions (Arz Odası or Arz Dîvanhanesi), located right behind the Gate of Felicity and integrating with it through its eaves is the primary venue embodying the Sultan’s direct contact with the state administration. This is the place referred to as the High Office (makam-ı muallâ) in Sultan’s decrees. Sultans used to receive ambassadors of foreign states in this chamber.

It is also the venue where they ceremoniously handed in the Sacred Banner (Sancak-ı Şerif) to the commanders of expeditionary forces going on a military campaign. Behind the Audience Chamber on the eastern side is the Dormitory of the Expeditionary Force. On Sundays and Tuesdays, i.e. the customary Audience Days (Arz Günleri) and also following meetings of the Imperial Council (Dîvân-ı Hümâyûn), Sultans held here private consultations with state officials.

This is just in the opposite of Bab-üs Saade and it goes united with its fringes to the gate. Main entrance to the Audience Chamber, with the small fountain of Sultan Süleyman I to the right, and the large gifts window to the left. The Audience Chamber, also known as Audience Hall or Chamber of Petitions (Arz Odası) is located right behind the Gate of Felicity, in order to hide the view towards the Third Courtyard. This square building is an Ottoman kiosk, surrounded by a colonnade of 22 columns, supporting the large roof with hanging eaves.

Room was strictly reserved for the Sultan's use on official occasions. Foreign envoys and visitors, the Prime Minister, Ministers and Chief Justices were received in audience by the Sultan in the Throne Room. Located in the third courtyard of the palace it was originally built on the orders of Sultan Mehmet, the Conqueror. Later the Throne Room was repeatedly modified and restored by other sultans. Inside is the main throne room with a dome and two smaller adjacent rooms. It comprises of a reception salon with the throne and two service rooms.

The Emperor was seated on a slightly elevated throne completely covered with gold cloth, replete and strewn with numerous precious stones, and there were on all sides many cushions of inestimable value; the walls of the chamber were covered with mosaic works spangled with azure and gold; the exterior of the fireplace of this chamber of solid silver and covered with gold, and at one side of the chamber from a fountain water gushed forth from a wall.

It is an old building, dating from the 15th century, and further decorated under Sultan Süleyman I. This audience hall was also called "Inner Council Hall" in contrast to the "outer" Imperial Council Hall in the Second Courtyard. Here the sultan would sit on the canopied throne and personally receive the viziers, officials and foreign ambassodors, who presented themselves.

The viziers came here to present their individual reports to the sultan. Depending on their performance and reports, the sultan showed his pleasure by showering them with gifts and high offices, or in the worst case having them strangled by deaf-mute eunuchs. The chamber was thus a place that officials reporting to the sultan entered without knowing if they would leave it again alive.

The most elaborate ceremonies which took place here where those conducted during the reception of ambassadors who came escorted by officials to kiss the hem of the sultan's skirt. The throne was richly decorated during the ceremonies.

The present throne in the form a baldachin was made by order of Sultan Mehmed III. On the lacquered ceiling of the throne studded with jewels are foliage patterns accompanied by the depiction of the fight of a dragon, symbol of power, with simurg, a mythical bird. On the throne there is a cover made of several pieces of brocade on which emerald and ruby plaques and pearls are sown.

The ceilings of the chamber was painted in ultramarine blue and studded with golden stars. The tiles that lined the walls were also blue, white and turqoise. The chamber was further decorated with precious carpets and pillows. This was to impress the visitors and hold them in awe of the power and presence of the sultan. The chamber was renovated in 1723 by Sultan Ahmed III and rebuilt in its present form after it was destroyed by fire in 1856 during the rule of Sultan Abülmecid I.

Two doors in front lead out into a porch, another one to the back. The two doors in front were for visitors while the third one was for the sultan himself. The embossed inscriptions at the main visitors' door, having the form of the sultan's monogram and containing laudatory words for Sultan Abdülmecid I, date from 1856.

The main door is surmounted by an embossed besmele (the Muslim confession of faith "In the Name of God the Compassionate, the Merciful") dating from 1723. The inscription was added during the reign of Sultan Ahmed III. The tile panels on either side of the door were placed during later repair work. There is a small fountain at the entrance by Sultan Süleyman I. The fountain was used not only for refreshments, but could be used to prevent others from overhearing secret conversations in this room. The fountain was also a symbol of the sultan, the Persian inscriptions calls him "the fountainhead of generosity, justice and the sea of beneficence."

The Audience Chamber is a classic example of Turkish style pavilion architecture, a vaulted structure consisting of a throne room and the ablution space next to it. It has two doors in front and one in the rear side. While the Sultans were only using the back door, the front door was used by state officials and ambassadors who were accorded audience by the Sultans.

Gifts presented by ambassadors were placed in front of the large window with iron bars in the middle of the main façade between the two doors and the Pişkeş (Gift) Gate to the left (Pişkeş Kapısı, Pişkeş meaning gift brought to a superior).The reign of Sultan Süleyman the Magnificent was the most glorious period of the Audience Chamber. The structure underwent several repairs from the 16th through the 19th Century.

Nevertheless the inscription in verse adorning the dome over the throne room indicates that it was initially built during the reign of Sultan Mehmet III (1595-1603). The lacquered ceiling of the jewels inlaid throne is decorated with floral motifs, between which is depicted the struggle of a dragon against a simurgh as a symbol of power. This throne chamber was saved with the least damage from the 1856 fire.

However, the fireplace hood, the tiles on the surface of the dome and on the walls, the wooden windows and door wings ornamented with tortoiseshell and mother of pearl and all the items inside had been burned. Following the 1856 fire, the Audience Chamber was restored during the reign of Sultan Abdülmecit.

The structure that was renovated in Empire style by the architects and craftsmen who built the Dolmabahçe Palace reached our present-day with its decoration in Empire and Neoclassical styles. The monogram shaped marble relief inscriptions praising Sultan Abdülmecit situated on both sides of the door, were of course added following that restoration. The walls were coated during the 19th Century, with tile panels dated to the 16th Century.

Above the gate used by the Sultans we find the monogram of Sultan Mustafa III (1757-1774) with a repair inscription. There is also an epigraph written in Sultan Mahmut II calligraphy above the afore-mentioned Pişkeş (Gift) Gate.

These scripts and photographs are registered under © Copyright 2017, respected writers and photographers from the internet. All Rights Reserved.
Posted by ISTANBUL, Extended On Two Continents at 1:43 PM