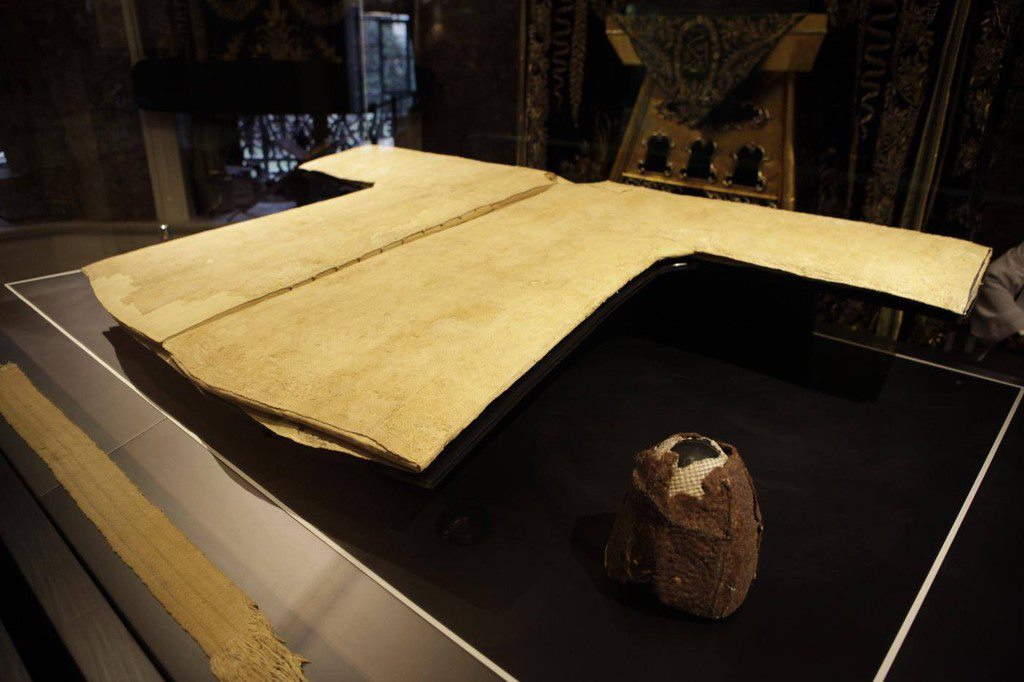 The Pavilion of the Holy Mantle was built on the orders of Sultan Mehmed, the Conqueror. This pavilion is also known as Has Oda (Hall of the Priory Chamber) and is located in the palace's third courtyard. The importance of the Pavilion of the Holy Mantle is that it contains belongings of the Prophet Mohammed, some of the Caliphs and Companions. Some of these were brought from Egypt by Yavuz Sultan Selim I and others, collected through various channels, are all placed in this Pavilion of the Topkapı Palace.

Hırka-i Saadet, is wide armed coat made of goat hair, it belongs to Mohammed the Prophet, and Hırka-i Saadet Room is the place where the coat is preserved in Topkapı Palace. After the conquest of Egypt, Sultan Selim I brought the holy coat with the other holy relics brought to Istanbul. Formerly, the coat was preserved in the harem, after Hırka-i Saadet Room was constructed in the Topkapı Palace, it was brought here with the other relics. The keys of the silver chest and the golden drawer was only possessed by the Sultans.

The visit of Hırka-i Saadet, which became a tradition from the period of Sultan Selim I and left by Sultan Abdülmecid, was done in every 15th of Ramadan Month. This ceremony was made by the Sultan, Sadrazam (Grand Vizier), Şeyhülislam (the Minister of Religious Matters) and other high officers. The Sultan used to open the locks, bring out the coat and spreads it to his face and eyes then the others used to do the same thing and the imams and müezzins used to read Koran till the end of the ceremony.

The mantle used to be visited by the sultan and his family and court with a traditional ceremony once a year on the fifteenth day of Ramadan. The kissing of the mantle was not done directly, but a piece of muslin was placed over it. This decorated kerchief was called the Noble Kerchief (destimal-ı şerif) and was provided for each person by the Agha of the Muslin (Tülbent Ağası).

The mantle was kept in a golden box, of which only the sultan had the keys. The box was opened while he intoned the besmele. The mantle was actually wrapped in a number of square pieces of cloth called bohças. In it was another small golden box in which forty bohça were wrapped around the mantle itself. The number forty was considered especially auspicious.

The Agha of the Muslin placed the first kerchief on the mantle and the sultan kissed it, followed by the imperial princes, viziers, officials, male attendants and eunuchs. This was done while Koranic chants filled the chamber. Next to kiss the kerchiefs were the women, who were lead by the Queen Mother, followed by the chief consorts, concubines and daughters of the sultan, as well as the wives of all officials present and female attendants.

A button of the mantle was dipped into rose water. Drops of the rose water were poured into pitchers which were given to important people. This water was called the Water of the Blessed Mantle (Hırka-ı Saadet Suyu) and was supposed to have miracle qualities. After the ceremony, the sultan had the mantle packed back into its forty bohças, the small golden box, the other bohças and then into the large golden box which itself was placed under the silver latticed canopy until next year.

These scripts and photographs are registered under © Copyright 2017, respected writers and photographers from the internet. All Rights Reserved.
Posted by ISTANBUL, Extended On Two Continents at 9:23 AM